“All creative people should be required to leave California for three months every year.”
-Gloria Swanson

Though we don’t have many stars from classic cinema among us today, often times, we are fortunate enough to still connect with them through the places that were once graced with their presence. Their history, legacy, and a lifetime of entertainment continues to live on. If we are lucky, we can catch a glimpse of what a day in their average work life could have been like.

As a Chicago native, I’ve always been fascinated by my town’s place in early cinema. After all, this was the place for moviemaking. The filmmaking industry had not yet been localized to sunny California just yet. As the manager at my internship with Essanay Studios Chicago used to say, “Before Hollywood, there was Chicago.”

Filled with bustling city life, and glamorous theaters to boot, Chicago was built to thrive and entertain the masses. It was very much a cultural hub, where people from all walks of life could easily find amusement through vaudeville, live theater, street performers, and even the opera. With so much talent circulating within the city, it is no surprise to find that many beloved performers got their start here.

Among the many performers the city attracted, one, in particular, was born right here. Though there are discrepancies as to where in the city she was born, Gloria Swanson was also a Chicago native. Born Gloria May Josephine Svensson to a Swedish father and Polish mother on March 27th, 1897, she was raised in the Swedish Lutheran tradition. Because her father was employed by the U.S. Army transport service, the family moved around frequently, but she was intermittently raised on Chicago’s North side.

There are, however, some discrepancies regarding her early years, due to several conflicting historical accounts. Some sources hold that she and her family resided near Waveland and Kenmore Avenue, while another historian holds that she was born near Damen Avenue and Grace Street. In her autobiography, Swanson herself mentions that she was born at 341 Grace Street, although, when she visited the city in her later years, she could not find the house.

Gloria’s mother arranged for her daughter’s singing lessons, while young Gloria also attended the Chicago Art Institute. Her father bought and operated the Relic House at 900 North Clark Street, across from Lincoln Park. A pub-like refreshment hall with relics from the Chicago Fire, the building also housed an adjoining rental library. The building was demolished in 1929.

Swanson was fifteen years old when her aunt, Inga, suggested that they visit nearby Essanay Studios at 1333-1345 West Argyle Street. The movie studio derived its name from a combination of the founders’ last names–George K. Spoor and Gilbert M. Anderson. Hence, we have S & A, or Essanay.

Inga was already friends with Spoor, so it was no trouble for Gloria and Inga to visit. While on the lot, Gloria asked if she could be an extra in a crowd scene. A director who saw her expanded upon her role, and later had Essanay hire her as a stock player for four days’ work at $3.25 a week. Afterwards, she graduated as a guaranteed player, and renamed herself Gloria Swanson.

Each day, Swanson and many other notable players (including Wallace Beery, Broncho Billy, Ben Turpin, and Charlie Chaplin) would go to work on the Essanay lot, entering through its famous terra cotta entrance and onto the current film set. Interestingly, it was here that Louella Parsons was hired on as a screenwriter, before going on to become a famous Hollywood gossip columnist. Today, Broncho Billy Anderson is honored with a park in Uptown, Chicago.

Actor Wallace Beery met Gloria Swanson while working at Essanay, and the two fell in love right on the studio lot. The two, however, seemed very different from one another. While Gloria was shy and a mere 90 lbs, with her costumes often weighing as much as her, Beery was the life of the party. Her career ascended, while his began to diminish. At the time of their marriage, Swanson was 17 and Beery was 30. Their wedding was less than a Hollywood dream, and life together was altogether gruesome, yet brief. While she wanted to become a mother more than being an actress, Beery felt he would lose his main source of income, and slipped her abortificants when she became elated over a pregnancy. Though they moved West together when Essanay did, their marriage did not last. In future interviews, Beery related that Gloria was the romance of his life. Swanson married six more times. 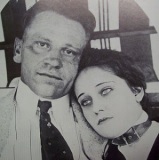 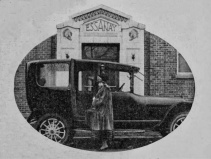 Spoor and Anderson eventually tired of lugging their equipment around Chicago to make movies on the plains of Rogers Park. Additionally, Chicago’s cold winters also put a damper on the filming process. This prompted the duo to visit California, where they entertained the prospect of opening a second location out West. They eventually settled on Niles, California, with its year-round, camera-friendly climate.

While visiting Hollywood, the team was introduced to another legendary actor, who would begin his early work with Essanay Studios: Charlie Chaplin. Upon seeing the young comic’s impeccable slapstick skills, Essanay persuaded him to leave Keystone Studios for a salary of $1,250 per week. Chaplin moved to Chicago, and lived in the Brewster Apartments at Diversey Parkway and Pine Grove. Soon, he built two homes that mirrored each other for himself and his other guests. One is a redstone, while the other is a graystone. They stand just around the corner from Essanay at 4901 and 4900 North Glenwood. 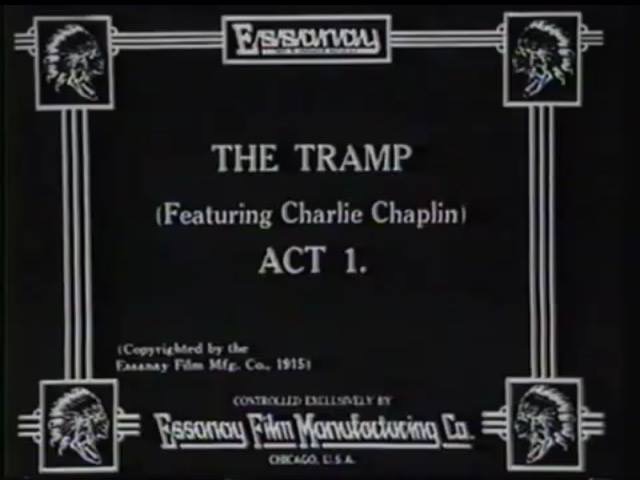 In 1915, Swanson was given an uncredited bit part in Chaplin’s first Essanay film, His New Job. After filming, the two would often drink at the Green Mill Gardens, which would later become the Green Mill Lounge, on Broadway and Lawrence Avenue. 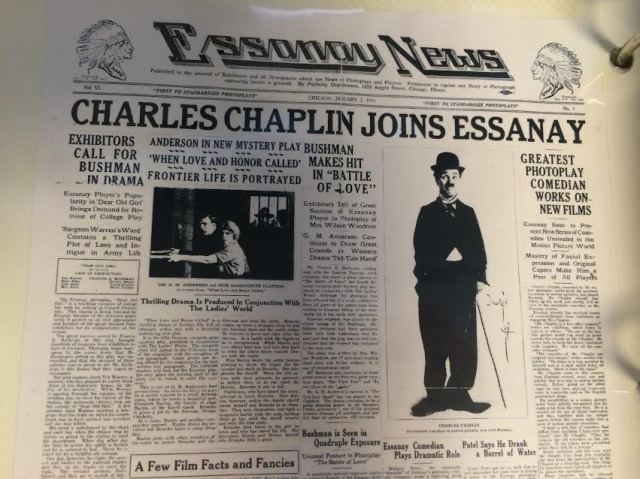 Once Chaplin became a big star, he became more vocal about his dislike for Chicago weather, and wanted to return to Hollywood to make more of a profit. Essanay tried to blackmail him to stay by threatening to send pictures of his mother, who was insane from syphilis and dying in a sanitarium, to the Chicago Tribune. After Chaplin resisted and left Essanay, it marked the beginning of a decline for the studio. Chaplin’s departure prompted the move of many other star players, including Swanson.

With Chaplin gone, Essanay hired on French pantomime Max Linder as a last-ditch effort. His routines, however, failed to match Chaplin’s popularity in America. By 1920, Essanay had disbanded.

After her two-month marriage to Beery, Swanson remained in California and landed a more profitable contract with Mack Sennett Studios. The film industry continued to flourish noticeably in California, and Swanson continued to obtain better contracts through different studios as her career continued.

But Swanson worked namely in silent cinema, and her career eventually hit a rough patch with the advent of sound. Once her movie career seemed stagnant, she scored her greatest hit in what I think is one of the top films ever produced–Billy Wilder’s 1950 classic, Sunset Boulevard. In this film, she plays Norma Desmond, a forgotten and partially mad star of silent film.

This isn’t to say that Gloria played a perfect caricature of herself. She later joked that she was not really Norma Desmond, and that there were no dead men floating about in her pool.

In the film, Gloria nods to her early career, entertaining her captive guest with Mack Sennett bathing beauty routines. She even imitates her former Essanay co-star, Charlie Chaplin, in her “Norma Desmond Follies.”

For more information on Essanay Studios Chicago, I recommend a visit to the Chicago History Museum. 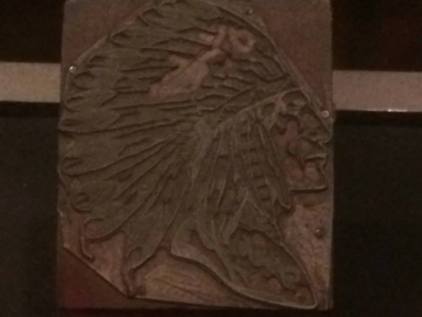 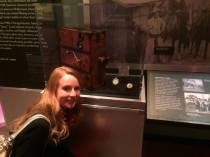 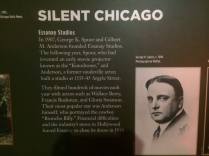 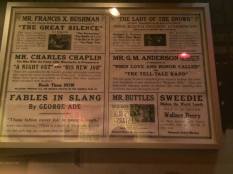 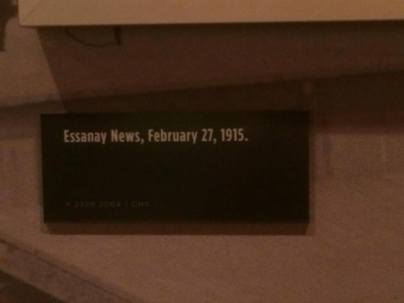 Unfortunately, not much of Chicago’s film history remains. However, the former Essanay Studios Chicago still stands.

Once Essanay Studios Chicago stopped functioning under Spoor and Anderson, the building took on another life of its own. It was later taken over by an independent producer who made industrial films until about 1970. The studio was then passed to a non-profit television corporation, which loaned the space as the midwest office of Technicolor productions. The Essanay location in Niles, California, no longer functions as a studio, but is instead a Silent Film Museum, housing many of Essanay’s props and equipment.

Today, the Essanay lot is home to St. Augustine’s College, which is an Episcopalian school namely serving the Hispanic community. This past summer, I was hired on as a writer for Essanay Studios Chicago, which maintained a team of wonderful people who were dedicated to the preservation of early film and Chicago’s cinematic history. At the time, St. Augustine College and our team was working to do some fundraising in order to create a center for early film in the former studio, and to revitalize the space as a cultural hub for the local community. Unfortunately, the college pulled the plug on the project. Nonetheless, the history still stands, and is luckily not going anywhere!

It was an absolute delight to be able to work for Essanay when I did. I joined the effort on a whim when I was living in Rogers Park and attending graduate school at nearby Loyola University. Always curious about the studio, I decided to investigate a bit and see if I could get some information on the locale.

Although the Essanay team with which I worked is no longer stationed in the studio, I am confident that you can still arrange for a tour of the former studio. I would highly recommend calling in advance, just so the school can set you up with someone who is familiar with the building’s historical importance and landmark status. In the meantime, allow me to step in!

This is the door to Essanay Studios, which is probably the most famous relic of Chicago’s cinematic contributions. It still has the original logo, and the two Essanay Indians. The door needs a little love and care, but fortunately, our fundraising efforts covered its restoration. 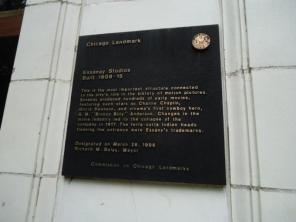 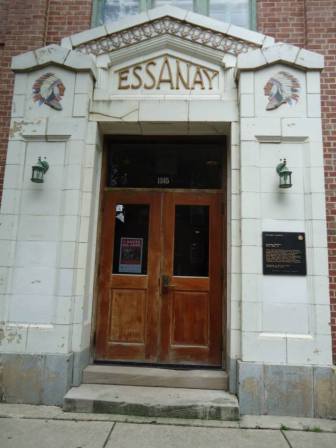 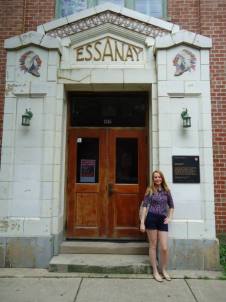 In the basement of the studio, you’ll find original vaults in which the film was  stored. Yes, original, and fireproof. The shelving is original to the vault and hasn’t been modified since Chaplin’s day. 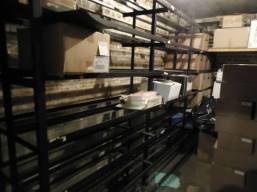 The next few pictures are some shots taken around the office… 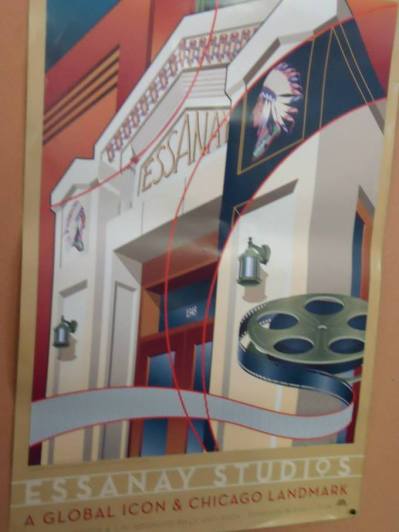 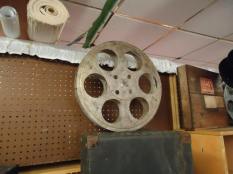 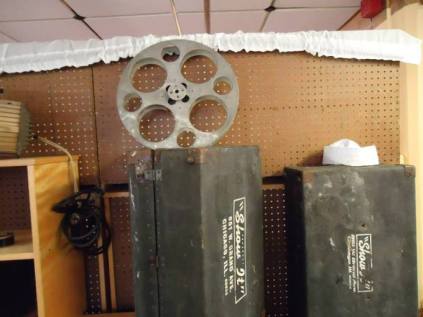 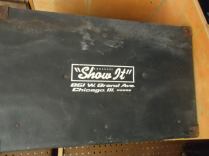 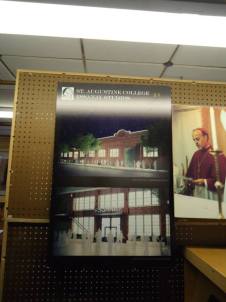 The studio itself is still intact, though is used as the school’s Charlie Chaplin Auditorium. The mainstage is an expansive room, which, amazingly, boasts the original catwalks from above. There is a mural of Chaplin and Jackie Coogan from The Kid in the middle of the room, just over a balcony. One can only imagine all of the talent and incredible sets that graced this simple room! 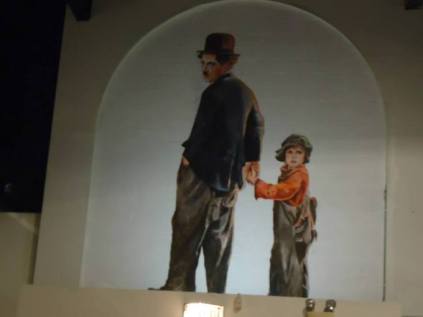 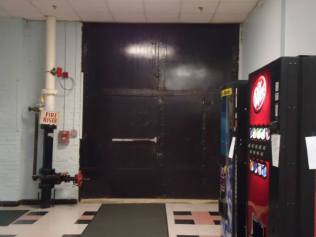 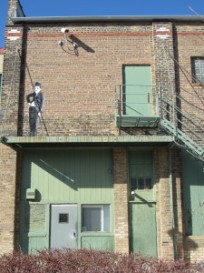 If you are curious about early film, and especially Chicago’s role in silent cinema, I highly recommend that you arrange for a tour of the former studio. Best of all, it’s free to walk past the landmark door that some of cinema’s greatest legends walked through each work day. Get ready for your close-up! 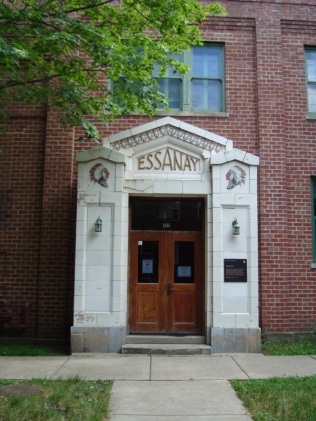