In my opinion, I think that The Best Years of Our Lives (1946) is the finest depiction of post-war life for soldiers in America. Brilliantly directed by William Wyler, the film’s immensely talented cast delivers performances that are believable, moving, and emotional. Moreover they succeed in realizing a sense of empathy among audiences, particularly connecting with individuals who have served or have had loved ones in service.

Inspired by a 1944 article in Time about the difficulties faced by men returning to civilian life, Samuel Goldwyn worked to produce a film about the subject. He hired on former war correspondent MacKinlay Kantor to draft a screenplay. The screenplay initially appeared as a novella entitled Glory for Me, which Robert E. Sherwood adapted as a screenplay. Resonating beautifully with audiences, the film version would go on to become a commercial success and the sixth most-attended film of all time in the UK.

While there is much to be celebrated about this esteemed classic, its portrayal of marriage and relationships are particularly fascinating. Here, the film centralizes upon the lives of three soldiers returning from war and rekindling the relationships they had to leave behind. As is an unfortunate fact of war, each soldier grapples with the horrors seen in battle, often struggling to relate to the latest dictation of “normalcy” that surrounds him. Each transitioned abruptly from civilian lives and relationships into the harsh realities of war, participating in an experience of World War II that is far different than the experience felt on the homefront. In addition to this, the soldiers struggle with a variety of internal and external changes that have reshaped them physically and mentally. However, during this emotionally trying period of readjustment and isolation, one of the most potent ways to potentially alleviate the situation is through a trustworthy and supportive relationship. Whether the relationship be with a significant other, a dear friend, or a patient listener, it is the sense of connection that offers a sense of renewal and healing.

The soldiers at the core of the story are Fred Derry (Dana Andrews), Homer Parrish (Harold Russell), and Al Stephenson (Fredric March), who meet when flying home to Boone City. Fred was a captain and bombardier in Europe and returns to his beautiful but materialistic and unsympathetic wife, Marie (Virginia Mayo). Al, an infantry platoon sergeant in the Pacific, returns to his wife (Myrna Loy), son (Michael Hall), and daughter (Teresa Wright). Homer, a petty officer, has lost both of his hands from burns and has been trained to use mechanical hook prostheses as his new hands. While each of the men awaits challenges and adjustments as they share their stories, it is Homer’s reality that is an unspoken but clear concern for them. Homer’s family and girlfriend, Wilma (Cathy O’Donnell), have yet to see Homer and his prostheses. At the core of this scene is Fred and Al’s silent prayer that Wilma will continue to love and support Homer, instead of making his wounds all the more painful to face alone.

Before the soldiers are taken to their respective homes, their stories already begin to intertwine. Feeling a sense of camaraderie, they stay in touch with one another and often meet at a bar owned by Homer’s uncle (Hoagy Carmichael). There, the trio reunites and socializes to the tune of  Uncle Butch’s piano-playing. 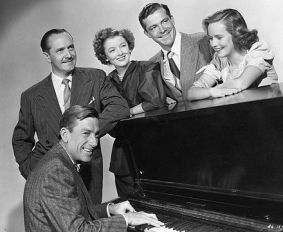 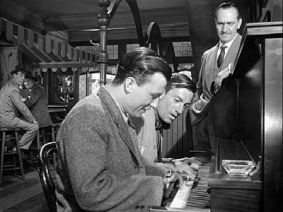 The 1946 Academy Award®-winning film “The Best Years of Our Lives” featured Harold Russell and Hoagy Carmichael. Russell was a real-life war veteran who lost both his hands during the war when a defective fuse exploded in his grasp. Russell, who won the Supporting Actor Oscar® for his portrayal of Homer Parrish in the film, received an additional Oscar statuette as a Special Award for “bringing hope and courage to his fellow veterans.” He and Carmichael, pictured here, played a piano duet in the film, which won the Oscar for Best Picture of 1946. Restored by Nick & jane for Dr. Macro’s High Quality Movie Scans Website: http:www.doctormacro.com. Enjoy!

In a beloved reunion scene, Al comes home to the delight of his children–adult daughter, Peggy, and teenager, Rob–but gleefully silences them in order to surprise his wife as he strolls into the house. He and his wife, Milly, embrace as the family is made whole again.

Al returns to his banking job and is soon promoted to vice president in charge of small loans. The bank’s president views his military experience as ideal for working with other returning servicemen as clients. Al makes a decision to approve a loan to a Navy veteran without collateral and is chastised, but Al argues that the bank must give veterans every chance to rebuild their lives. Milly supports him fully with both understanding and a keen sense of humor that propels him forward and encourages him to face yet another day.

As Al grapples with conflicts in his philosophy, age, and experience, Fred takes on his own set of struggles. Prior to joining the military, Fred worked as a soda jerk and met and married Marie after a brief courtship. Less than a month after their wedding, he left for the war. In the meantime, Marie worked as a nightclub waitress but harbored a vision that Fred would eventually leave his position and work in a role that she deemed worthy of her. Due to the tight labor market, Fred reclaims his old job and Marie makes it abundantly clear that she does not enjoy being married to a soda jerk. She feels superior to Fred and constantly berates him, viewing him as nothing short of a failure in her eyes. Eventually, the two part ways as their turbulent home lives and a case of infidelity become an issue, and Fred feels more isolated than ever.

Though Fred’s relationship with Marie deteriorates, one of patience and understanding begins to blossom in its stead. When Al, Fred, and Homer reunite at the bar owned by Homer’s uncle, Fred is introduced to Al’s daughter, Peggy. There is an evident spark of attraction between them, even though they barely know one another.

While Fred’s previous whirlwind relationship is no source of support, the friendship he develops with Peggy is different. There is a sense of maturity in their exchanges with one another that is not visible in his moments with Marie. At the same time, Peggy is one who carefully observes and empathizes with the world around her, becoming quite concerned and attuned to Fred’s personal struggles. When Fred stays over at Al’s home one evening, it is Peggy awakes and comforts him as he is in the thick of a nightmare that once again returns his labored mind to the war. Though Fred is half-asleep, he returns to some semblance of a restful night after Peggy speaks to him and soothes him. 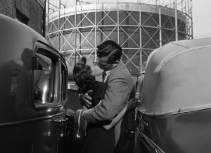 All the while, Homer begins to face his new reality. Before the war, he was a high school football quarterback and became engaged to his next-door neighbor, Wilma. Not wanting to burden her with his physical challenges, he pushes her away. However, Wilma is greatly dismayed and continues to genuinely love Homer. Wilma does not shy away from Homer and wants to be his ideal partner, no matter the obstacles that may arise in life. More than anything, she wants to marry him, learn how to care for him, and start a new life with him.

In what is arguably the most emotional and pivotal scene in the film, Homer becomes especially vulnerable as he opens up to Wilma about his nightly routine of removing his prostheses. When Wilma does not balk at this reality, the possibility of a future for Homer and Wilma as a couple is finally–to the viewer’s relief–envisioned as attainable.

Though Al and Homer have partners whom they can rely upon, Fred is still working on navigating a future for himself. He aims to leave town to try and make a new start. While he waits for a plane, he wanders into a seemingly endless aircraft boneyard–a grim and wrenching scene for him to behold, since the aircrafts were so pivotal to him during every day of battle as a bombardier. When he crawls inside the nose of a B-17, a flashback overcomes him and instantly transports his mind to the days of combat

Though shaken, he dismounts the plane and encounters the boss of the work crew that is disassembling the planes as material for prefabricated homes. Fred persuades the boss to hire him and finds himself in a fruitful role of rebuilding and restoring as opposed to one of destruction. 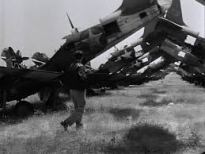 In the days that follow, Fred–now divorced–stands up as best man at Homer and Wilma’s wedding. As Homer and Wilma take their vows a somber tone envelops the scene. Fred locks eyes with Peggy and can envision them taking their own marriage vows just as seriously as Homer and Wilma.

Though each of the soldiers has a meaningful romantic relationship by the end of the film, each of the marriages seems to symbolize something a bit different form the next. Milly and Al exude joy and determination as a couple. Homer and Wilma exemplify honesty and responsibility. What’s more, Fred and Peggy demonstrate a clear openness and vulnerability. However, it is the idea of connection that grounds each of these stories and makes adjusting to an uncertain future more palatable and even welcome. 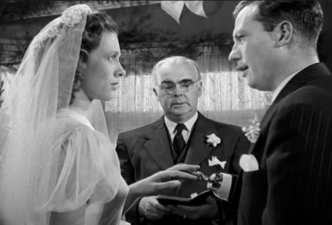 The full cast list for this film is as follows:

Though the film was released close to the end of World War II, its message and story is still incredibly powerful and poignant to this day. The phenomenal performances of the cast are still highly impactful and the film continues to brim with stirring and memorable scenes. Moreover, the plots and relationships portrayed in this film remain as brilliant as ever.

This post is part of “The Wedding Bells Blogathon,” hosted by Hometowns to Hollywood. To read more participant entries, please click the image below. 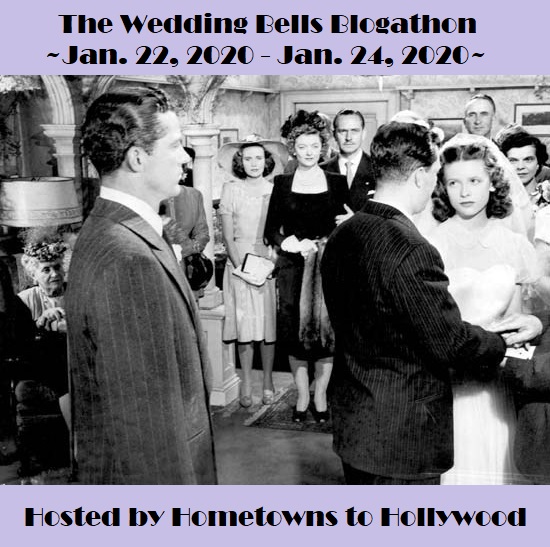