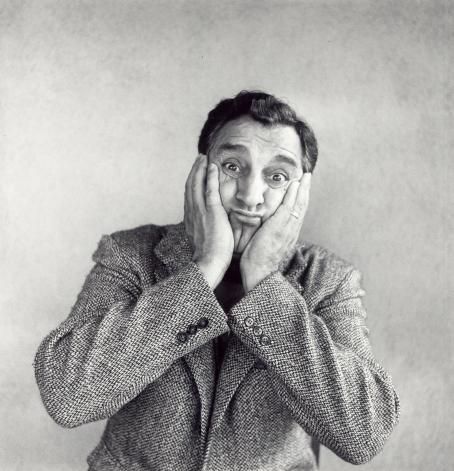 “Success has nothing to do with what you gain in life or accomplish for yourself. It’s what you do for others.” –Danny Thomas

Many remember Danny Thomas as an individual who made his mark upon the entertainment industry as a nightclub comedian, singer, actor, and producer. His lengthy career included a starring role in a situation comedy, in addition to appearing in a wide range of variety shows. Though valued as an entertainer, he was also a generous and notable philanthropist, founding St. Jude Children’s Research Hospital.

Amos Muzyad “Muzzy” Yakhoob Kairouz was born on his family’s horse farm in Deerfield, Michigan, during a blizzard as one of 10 children. His parents were Charles Yakhoob Kairouz and Margaret Taouk.

Though born in Michigan, the family soon moved. Kairouz grew up in Toledo, Ohio, attending St. Francis de Sales Church, as his parents were Catholic immigrants from Lebanon. He went to Woodward High School and, later, the University of Toledo, where he was a member of the Tau Kappa Epsilon fraternity. Bishop Samuel Stritch, a native of Tennessee, would confirm him and  become a lifelong spiritual advisor to him.

As a child, Kairouz and his brother, Raymond, were a vaudeville team. Once the duo grew up and Raymond got married, Kairouz hitchhiked to Detroit, Michigan, to find work in radio. In 1932, Kairouz began performing on the radio in Detroit on WMBC. During this time, he performed under his anglicized birth name, Amos Jacobs Kairouz.

While working as a struggling young comic, he also executed a variety of odd jobs. Kairouz found work as a kitchen helper and as a punch-press operator’s assistant to lumber yard watchmen. During this time, he met singer Rose Marie Mantell. They were married one week after his 24th birthday. The couple would go on to have three children: Margaret Julia “Marlo”, Theresa “Terre”, and Charles Anthony “Tony” Thomas. Each of the children would find work in entertainment, with Marlo as an actress and producer, Tony as a television producer, and Terre as a singer-songwriter. The couple would remain married until Kairouz’s death in 1991.

Once Kairouz moved to Chicago in 1940, he decided to perform under a pseudonym because did not want his friends and extended family to know that he went back to working in clubs. As a result, he came up with the stage name “Danny Thomas,” borrowing the first names of two of his brothers as he continued his work in entertainment.

All the while, Thomas’s faith remained important to him. According to Thomas, “I got through my act at 4:30 A.M. and I went to a 5 A.M. mass to thank God. As I knelt, I saw in the pew in front of me a huge pamphlet with St. Jude’s picture mentioning a novena in honor of a national shrine.” While he was struggling as an actor, he made a personal vow: if he found success, he would open a shrine dedicated to St. Jude, the patron saint for hopeless causes.

Soon after, Thomas would first reach mass audiences through radio by playing Amos, a brother-in-law character on The Bickersons, starring Don Ameche and Frances Langford. He also appeared as postman Jerry Dingle on Fanny Brice’s The Baby Snooks Show, in addition to several appearances on NBC’s radio variety show, The Big Show. 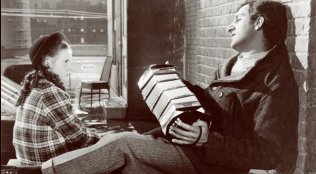 Along with working on the radio, Thomas also shared his talents through film. He made two films with Margaret O’Brien in the late 1940s and later appeared with Betty Grable in the musical film, Call Me Mister (1951). Continuing his musical roles, he portrayed composer Gus Kahn in I’ll See You in My Dreams (1951). By 1952, he worked alongside Peggy Lee in The Jazz Singer, a remake of the original 1927 film.

Thomas found immense success with an 11-year run on the television comedy series, Make Room for Daddy or The Danny Thomas Show. The show was produced at Desilu Studios, where Lucille Ball was performing alongside her husband, Desi Arnaz, in I Love Lucy. In 1970, the series was revived for one season as Make Room for Granddaddy. 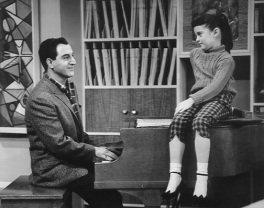 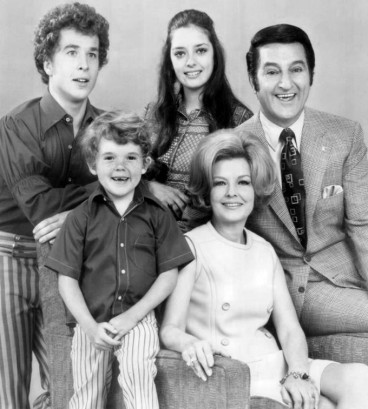 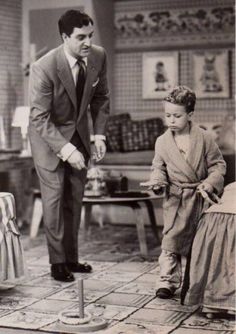 Off-screen, Thomas became an exceptional television producer, working on shows like The Dick Van Dyke Show, The Andy Griffith Show, That Girl, and The Mod Squad. He often appeared in cameo roles on the shows he produced. In fact, Thomas was responsible for Mary Tyler Moore’s big break in the acting business. Though he turned her down for one of his shows, he recommended her to Carl Reiner, remembering her as “the girl with three names.” Reiner would cast her in The Dick Van Dyke Show.

Over time, Thomas did not forget about his promise to St Jude. Once he became a successful actor in the 1950s, he and his wife began to travel throughout the U.S. in order to raise funds to make St. Jude’s Children’s Hospital a reality. Thomas believed that “no child should die in the dawn of life”, and actively worked to promote his dream. To bolster his campaign, Thomas recorded an album of Arabic folk songs for a St. Jude Hospital Foundation fundraiser. 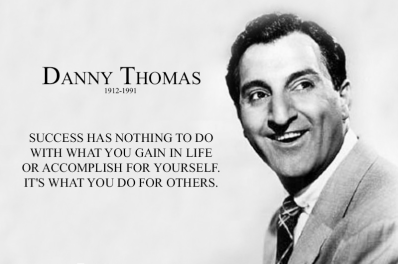 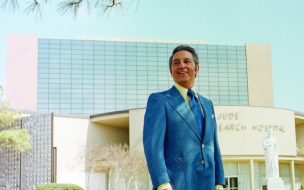 Out of all of his achievements, Thomas was most passionate about his work for St. Jude Children’s Research Hospital. Thomas once said, “It is my belief that St. Jude Hospital will one day announce to the world the great tidings of a cure for leukemia or cancer or even both. I am proud to beg for this project.” Since its inception, St. Jude Children’s Research Hospital has treated children within the U.S. and all over the world, continuing the mission of saving children and finding cures to illnesses.

Thomas died on February 6, 1991, at the age of 79. Two days prior to his passing, he celebrated St. Jude Hospital’s 29th anniversary and filmed a commercial for it, which aired posthumously. He and his wife are interred in a mausoleum on the grounds of the hospital. 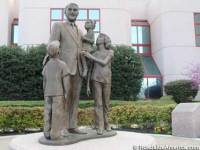 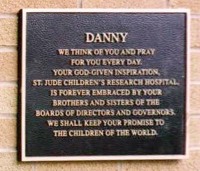 While Thomas was not proud of his origin in small towns, there are places in Toledo, Ohio, that acknowledge his time there. In 1930, Thomas was listed as living at 909 Walnut St. in Toledo. This is the property today: 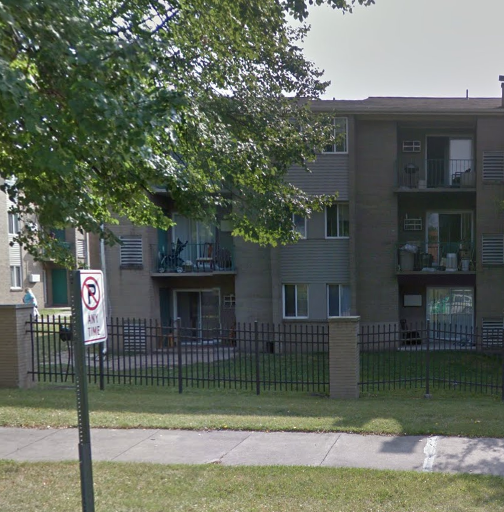 Nearby, there is a Danny Thomas Park, which displays a monument to Thomas. The park is located at 2199 Broadway St. in Toledo. As of March 2018, there are plans to conduct a $1 million restoration on the park to update the equipment. 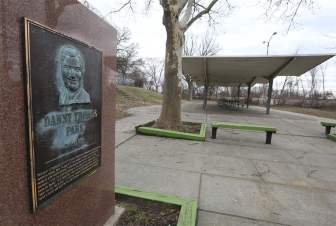 Additionally, in 2012, the U.S. Postal Service issued a postage stamp in honor of Thomas.

Beyond Toledo, the city of Memphis, Tennessee, has Danny Thomas Boulevard, fittingly named after Thomas in the town that houses the hospital he helped establish. 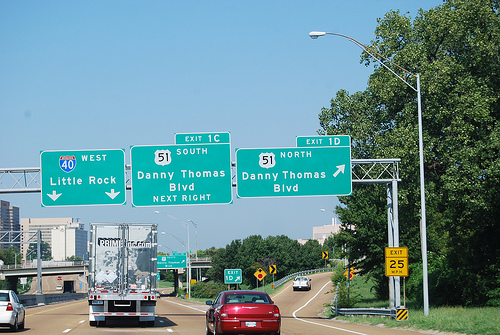 Perhaps the greatest testament of all to Thomas’s legacy is St. Jude Children’s Research Hospital, which actively makes a difference in the lives of children all over the world to this day. According to Thomas’s vision, no child is denied treatment on race, religion, or a family’s ability to pay. 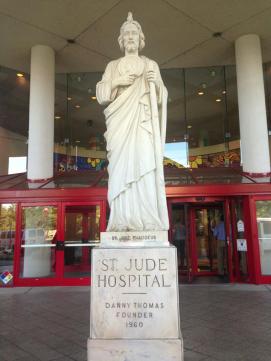 There are so many different ways to remember Thomas’s life and legacy. One of the best ways to honor him is to support the foundation he so loved. Consider learning more about St. Jude Children’s Research Hospital and offering your support here.