Of the many musicals that MGM released, Meet Me in St. Louis (1944) is one that has certainly withstood the test of time and remains a beloved classic. Focusing upon the Smith family’s anticipation of the 1904 Louisiana Purchase Exposition–or St. Louis World’s Fair–and spanning the four seasons of the year, viewers learn of the joys, conflicts, and relationships that occur throughout the lives of the family members. Their love for one another in addition to their devotion to home are factors that ground them throughout the progression of the plot, even when one of those dear components of their lives is threatened.

The Smith family consists of husband and wife Alonzo and Anna, in addition to their four daughters (Rose, Esther, Agnes, and Tootie) and son (Lon Jr.). The children’s grandfather also lives in the home, while the maid is also frequently present. Rose is more than eager to be married, while Esther dreams of the oblivious boy next door, John Truett. Each of the family members possesses their own fun personalities and life in St. Louis seems to be a dream until Alonzo reveals his plans to accept a business promotion, uproot the family, and pursue a new life in New York.

The film drew its inspiration from Sally Benson’s 1942 novel of the same name, which initially appeared as a series of vignettes for The New Yorker. The vignettes were entitled 5135 Kensington, published from 1941 to 1942. Her set of eight original vignettes were supplemented with four more stories, with each chapter representing a month from the family’s experiences of part of 1903 and 1904. Though Benson would write an early draft of the screenplay for MGM, it was ultimately not used.

Nonetheless, Benson was a strong presence throughout the production of the film, thanks to director Vincente Minnelli’s focus on maintaining the accuracy and authenticity of the initial stories she shared. Though her family did move to New York, causing her to miss the fair, other aspects of her childhood and family life shine through. The character of Tootie is actually based upon Benson herself, though here sister, Agnes, pulled most of the pranks executed by Tootie in the film.

The film was produced by Arthur Freed with a screenplay by Irving Brecher and Fred F. Finklehoffe.

The cast members for this film include: 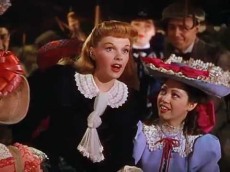 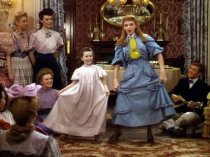 One individual who was also incredibly influential in the success of this film was composer Hugh Martin. Along with the assistance of Ralph Blane, the duo composed several songs for the film, including “The Boy Next Door,” “The Trolley Song,” and “Have Yourself a Merry Little Christmas.” They also came up with a new arrangement for “Skip to My Lou” which drew from the melodies included in traditional songs like “Kingdom Coming” and “Yankee Doodle.” Many of the other songs in the film were from the time period, including “Meet Me in St. Louis, Louis,” “Under the Bamboo Tree,” “Over the Banister,” and more.

Though Garland was supposed to sing “Boys and Girls Like You and Me,” by Rodgers and Hammerstein, the footage was cut from the film. Initially, the duo wrote the song for Oklahoma! but cut it from their show. Garland’s prerecording exists but the footage is now lost.

Upon its release, the film proved to be a major success with much praise going to both Garland and O’Brien. Behind the scenes, Minnelli and Garland fell in love, leading to their eventual marriage. When the film had its world premiere at the Loew’s State Theatre in downtown St. Louis, Benson attended. Garland would attend the opening at the Loew’s State Theater in New York, announcing her engagement to Minnelli.

The film went on to receive four Academy Award nominations for Best Writing (Adapted Screenplay), Best Cinematography (Color), Best Music (Scoring of a Musical Picture), and Best Music (Song) for “The Trolley Song.” While it did not win any Oscars for these categories, O’Brien took home the Juvenile Award for Outstanding Child Actress of 1944. 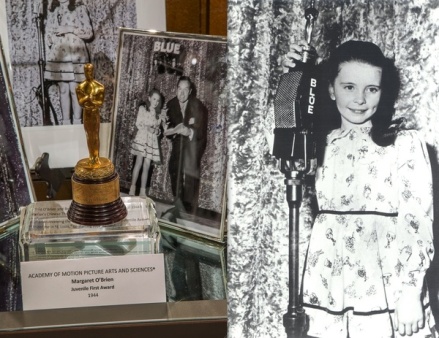 To this day, the film continues to be enjoyed by audiences, particularly during the holiday season. The film returns to the big screen as part of TCM’s Fathom Events Big Screen Classics series in December of 2019, after the citizens of St. Louis enjoyed a screening of the film and guest appearance by Margaret O’Brien in September as part of the TCM in Your Hometown Event. No matter the time of year, the chance to see this film on the big screen is not to be missed.