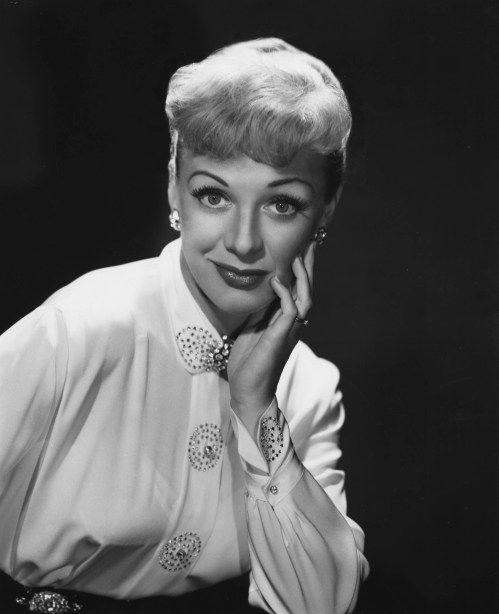 As someone with a background in teaching high school English, you can safely bet that I hold a special place in my heart for Eve Arden and her work in Our Miss Brooks. Eve is one of my favorite comediennes and has charmed audiences through her work on radio, film, and television, and continues to be a fabulous comedic force thanks to the amazing body of work that she left behind.

Eunice Marion Quedens was born in Mill Valley, California, on April 30, 1908. Her parents divorced when she was young, so her mother went into business for herself as a milliner. Eunice went to school at a Dominican convent school near Modesto and later attended Mill Valley Grammar school and Tamalpais High School in Mill Valley until she turned 16. Afterwards, she joined a stock theater company in hopes of starting a career in the entertainment industry.

Eve made her film debut under her real name in the backstage musical Song of Love (1929), as a sarcastic showgirl who acts a rival to the film’s star, Belle Baker. Upon the success of the film, Eve moved to New York City and appeared on Broadway in many different stage productions as a supporting player. In 1934, she was credited as Eve Arden for the first time as part of the Ziegfeld Follies revue. When she was instructed to change her name for the show, she looked at her cosmetics and borrowed her first name from Evening in Paris and the second from Elizabeth Arden. Between 1934 and 1941, she performed in Broadway productions of Parade, Very Warm for May, Two for the Show, and Let’s Face It! 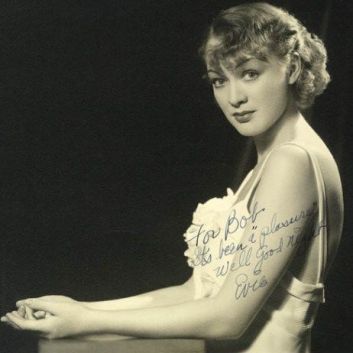 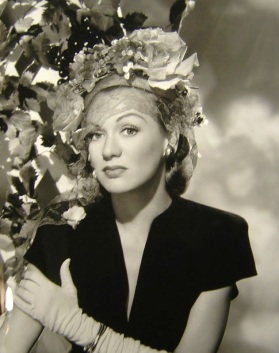 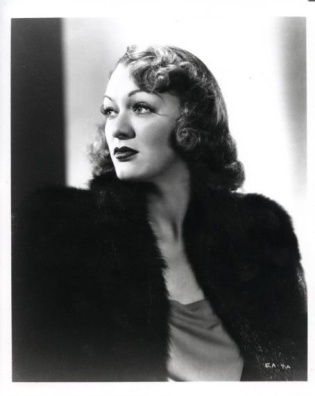 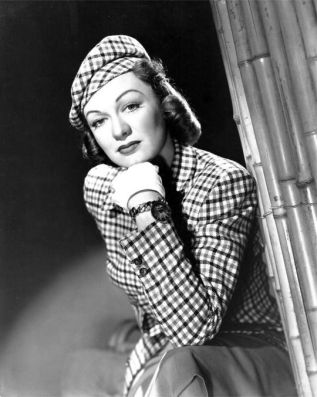 Eve’s film career began when she signed a contract with RKO Radio Pictures and appeared in the films Oh, Doctor (1937) and Stage Door (1937). Her sharp, witty, and sarcastic character in Stage Door became a blueprint for template for many of her future roles. Moreover, Stage Door had Eve working alongside the likes of Katharine Hepburn, Ginger Rogers, Gail Patrick, Lucille Ball, Ann Miller, and many other notable stars. She worked with Rogers and Ball again in Having Wonderful Time (1938), followed by a role in the crime film The Forgotten Woman (1939). Her appearance in At the Circus (1939), starring the Marx Brothers required her to perform acrobatics. 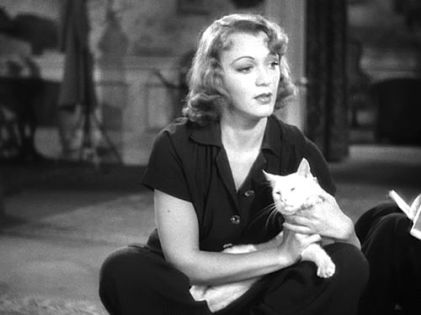 While Eve appeared in many films in the next few decades, one of her more memorable roles included a wisecracking friend to Joan Crawford in Mildred Pierce (1945), which earned her an Academy Award nomination for Best Supporting Actress. In the following year, Eve played Barbara Stanwyck’s best friend in My Reputation (1946). Additionaly, Eve also carried out the role of Jimmy Stewart‘s secretary in Anatomy of a Murder (1959), alongside her husband, Brooks West.

Though Eve had a steady career on the screen, her ability with witty scripts made her an enormous success on radio. She appeared regularly on Danny Kaye’s comedy-variety show for the duration of the season. Though Kaye’s show ended abruptly, Eve’s comic talent and timing were perfect for the role of Madison High School English teacher Connie Brooks in Our Miss Brooks. Eve portrayed the character on radio from 1948 to 1957. Eve also starred in the television adaptation of the series from 1952 to 1956, in addition to the 1956 feature film by the same name.

Our Miss Brooks was met with great success, as Eve won a listeners’ poll by Radio Mirror magazine as the top-ranking comedienne of 1948–1949. She was also a success among critics; the winter 1949 poll of newspaper and magazine radio editors taken by Motion Picture Daily named her the year’s best radio comedienne. Even though Eve had no training in education, she received actual job offers in the school setting because of her portrayal as Miss Brooks. Eve’s character was so popular that she was made an honorary member of the National Education Association and received a 1952 award from the Teachers College of Connecticut’s Alumni Association “for humanizing the American teacher.” Unlike some of the scatterbrained portrayals of women in several other sitcoms, Connie Brooks was competent and determined. While Eve did not accept any teaching job offers, she did speak at several PTA meetings and visited many different schools.

Eve was not the only film actress who found major success in sitcom television; while audience were enjoying Our Miss Brooks, they were also loving Lucille Ball at the time. Eve had a very brief guest appearance in a 1955 I Love Lucy episode entitled “L.A. at Last,” in which she plays herself. While awaiting their food at The Brown Derby, Lucy Ricardo (Lucille Ball) and Ethel Mertz (Vivian Vance) argue over whether a certain portrait on a nearby wall is Shelley Winters or Judy Holliday. Lucy urges Ethel to ask a lady occupying the next booth, who turns and replies, “Neither. That’s Eve Arden.” Ethel suddenly realizes she was just talking to Eve Arden herself, and the two gawk while Eve leaves the restaurant. 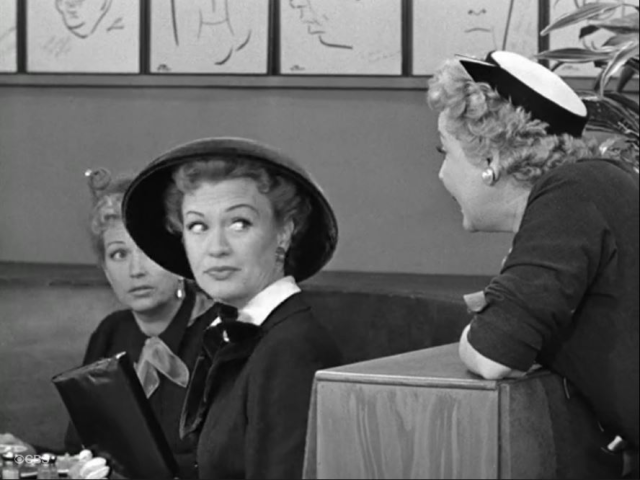 Desilu Productions, which was jointly owned by Desi Arnaz and Lucille Ball, was the production company for the Our Miss Brooks television show. Ball, according to numerous radio historians, suggested Arden for Our Miss Brooks after Shirley Booth auditioned for but failed to land the role. At the time, Ball was committed to her own radio series, My Favorite Husband.

After her success with Our Miss Brooks, Eve made several more appearances on television in shows like Bewitched, Alice, Maude, Hart to Hart, and Falcon Crest. In 1985, she appeared as the wicked stepmother in the Faerie Tale Theatre production of Cinderella. 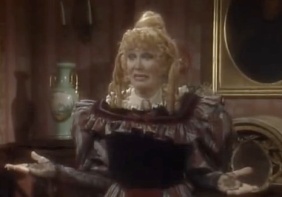 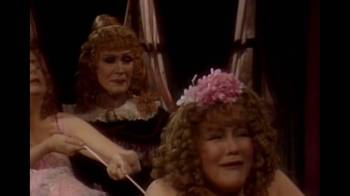 Eve also performed on stage in several notable title roles. She portrayed Dolly in  Hello, Dolly! and Mame in Auntie Mame during the 1960s. Eve substituted as Dolly on behalf of  Carol Channing for 17 weeks in Chicago while Carol was filming Thoroughly Modern Millie (1967). Oddly enough, Carol had been an understudy for Eve in a Broadway show called Let’s Face It (1941) only because she could fit Eve’s costumes. Eve often joked that she got Dolly for the same reasons. In 1967, Eve won the Sarah Siddons Award for her work in Chicago theatre. 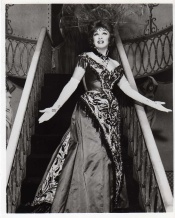 Additionally, Eve became familiar to a whole new generation of film-goers when she played Principal McGee in Grease (1978) and Grease 2 (1982). Her deadpan delivery style was perfect for the character. 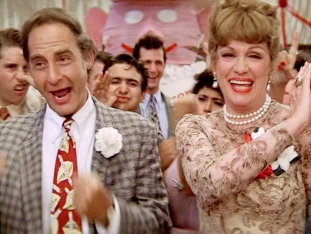 In 1985, Eve published an autobiography called The Three Phases of Eve. She was inducted into the National Radio Hall of Fame in 1995 and is honored with stars on the Hollywood Walk of Fame.

No discussion of Eve Arden would be complete without mentioning a high school! Her old high school, Tamalpais High School, stands at 700 Miller Avenue in Mill Valley.

Finally, the Shubert Theater in which Eve Arden carried out the role of Dolly still exists. It is located at 18 West Monroe Street in Chicago, Illinois, and is now referred to as the PrivateBank Theatre.

Whether you remember Eve best as Connie Brooks or Principal McGee, I’m sure you will agree that Eve was an irreplaceable comedic legend uniquely tied to the field of education.

This post is part of the Phyllis Loves Classic Movies Blogathon, entitled, “The Eve Arden Blogathon.” To access more information and read accompanying posts, please click on the following picture: 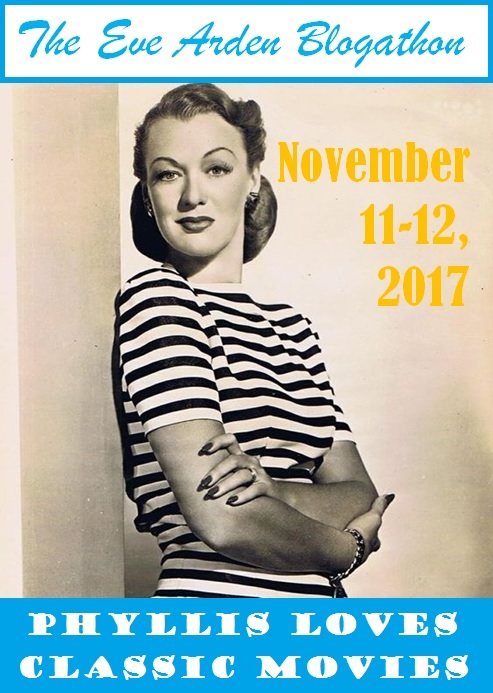