“What I have got is I have character in my face. it’s taken an awful lot of late nights and drinking to put it there. When I go to work in a picture, I say, ‘Don’t take the lines out of my face. Leave them there.” –Humphrey Bogart

Humphrey Bogart was one of the most prolific stars of his day. As an American stage and film actor, Bogart carried out many different roles throughout his long career, while also appearing in a wide range of iconic films.

Humphrey DeForest Bogart was born on December 25, 1899, in New York City. His parents were Belmont DeForest Bogart, a cardiopulmonary surgeon, and illustrator Maud Humphrey. Maud studied art in New York and France, also working under the tutelage of artist James Abbott McNeill Whistler. Bogart and his two younger sisters, Frances (“Pat”) and Catherine (“Kay”), were raised Episcopalian. The family lived in Manhattan with three servants to help with the children.

Unfortunately, family life was strained in the Bogart home. His parents fought and were busy with their professional endeavors, and showed little emotion towards Bogart and his siblings. Despite the lack of sentimentality, Bogart did act as a model for his mother’s work. His mother used a drawing of him for a Mellins Baby Food advertising campaign, in addition to other works.

As a child, Bogart and his friends would orchestrate plays while visiting the family’s Canandaigua Lake home in upstate New York. Bogart also enjoyed fishing and boating, which would remain lifelong interest for him.

Bogart received his education at the Delancey School until fifth grade, later transitioning to the Trinity School as well as Phillips Academy. Despite attending prestigious institutions, he was unhappy as a student and ultimately left Phillips Academy. Bogart worked as a shipper, bond salesman, and clerk after leaving Phillips Academy.

Instead, Bogart pursued his interest in boating and enlisted in the U.S. Navy during World War I. He attended training camp at Pelham Bay Park in New York. During his service, he was a model sailor and enjoyed the many new experiences that Paris offered him.

Once Bogart returned from the service, his family’s wealth and father’s health were not what they used to be. Moreover, he found his ideals and characters to be vastly different from that of his family. He joined the Coast Guard Reserve and expressed an interest in screenwriting, directing, and production, even working as a stage manager in Alice Brady’s A Ruined Lady. He would make his stage debut in the play Drifting in 1920, offering one line of dialogue as a Japanese butler. Nonetheless, he carried out more stage roles and enjoyed the schedule kept and attention received. Though Bogart never took acting lessons, he found success in performing.

In 1926, he married actress Helen Menken, though the marriage would last a little over a year due to his focus on furthering his acting career. He then married actress Mary Phillips in 1928.

Bogart looked to advance his career by transitioning to films. He made his film debut in a short called The Dancing Town (1928) with Helen Hayes. He would also appear in the Vitaphone short Broadway’s Like That (1930) with Joan Blondell.

After his roles in shorts, Bogart signed a contract with Fox Film Corporation. Soon after, he befriended actor Spencer Tracy, who was the first to call him “Bogie.” Both Bogart and Tracy would make their film debuts in Up the River (1930). After this film appearance, Bogart split his time between New York and Hollywood, circulating among various stage and film roles.

During this period, Bogart’s parents had already separated and his father had amassed a large debt. Bogart and his father reconciled when his father was seriously ill, with Bogart expressing how much he loved him before his father passed away. Bogart would pay off his debts. As Bogart was at his side, his father gave him his ring, which Bogart would sport in several films in his memory.

Bogart’s breakthrough role would occur in The Petrified Forest (1936). After seeing Bogart in the play Invitation to a Murder in 1934, producer Arthur Hopkins cast Bogart in the role of escaped criminal Duke Mantee in the play version of The Petrified Forest. After 197 performances, Warner Brothers soon bought the screen rights to the play, with both Leslie Howard and Bogart reprising their roles alongside Bette Davis. Howard held production rights to the film and pressed for Bogart to be in the film–a favor Bogart never forgot. In fact, his daughter, Leslie Howard Bogart, would be named after Howard.

While at Warner Bros., Bogart was typecast in gangster roles, with the majority of better roles going to James Cagney and Edward G. Robinson. During this period, he married actress Mayo Methot, who presented additional problems due to her struggles with alcoholism and aggression. Their turbulent relationship and violent home life became evident in the gossip columns, earning them the nickname of the “Battling Bogarts.”

It was not until High Sierra (1941) when Bogart was given a more challenging acting assignment. Though the film had Bogart work as a gangster once more, he developed a friendship with John Huston and both admired and befriended many studio writers. Bogart would go on to appear in The Maltese Falcon (1941) in the same year, which was also Huston’s directorial debut.

Another iconic role for Bogart would occur the following year in Casablanca (1942). The film would win the Academy Award for Best Picture as well as a Best Actor nomination for Bogart. The success of the film also profited Bogart, making him the world’s highest paid actor by 1946.

While Bogart continued to work in films, he also toured Italy and Africa on behalf of the USO and various War Bond tours.

Of his relationships, his final one with Lauren Bacall tends to be remembered best. The couple met while filming To Have and Have Not (1944). Despite their age difference–Bogart was 44 and Bacall was 19–they quickly developed a bond. Bacall was new to films and looked to Bogart as a mentor and seasoned actor, while Bogart saw promise in her as a rising star as well as a companion. Bogart aimed to put her at ease while working on the film, leading them to establish a strong personal and professional relationship. After divorcing Methot in 1945, Bogart and Bacall married three months later at the Ohio country home–Malabar Farm–of Bogart’s friend, author Louis Bromfield. 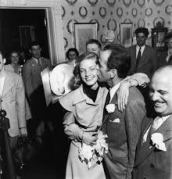 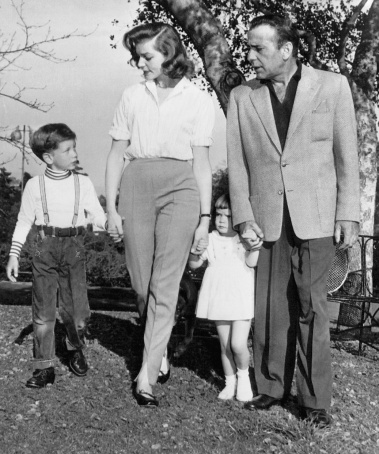 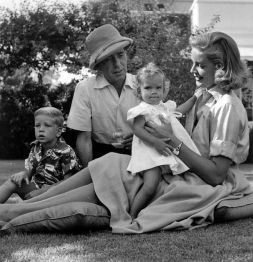 Overall, Bogart’s relationship with Bacall was a happy one. In his free time, he also continued to explore his love of sailing, purchasing the Santana–a sailing yacht from actor Dick Powell. 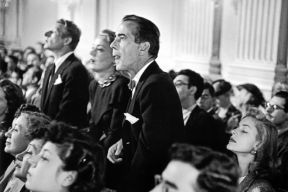 Bogart teamed with Huston again for The Treasure of the Sierra Madre (1948) while signed to a contract that allowed him the right to create a production company. He actively opposed the House Un-American Activities Committee and formed his film company, Santana Productions. Though most of his films through Santana Productions lost money and led to the sale of the company, his appearance in the film noir In a Lonely Place (1950) was highly regarded.

Beyond Santana Productions, he also starred with Katharine Hepburn in Huston’s The African Queen (1951). The film was shot on location in the Belgian Congo, with Bacall also in tow. While there, Bacall cared for her husband and crew, taking on cooking, offering first aid, and washing. Bogart received an Academy Award for his portrayal of Charlie Allnutt in the film.

After receiving his Oscar, Bogart continued to appear in many more films including The Caine Mutiny (1954) and Sabrina (1954). During this period, he also became close friends with several singers who would later become the Rat Pack. He made occasional guest appearances on television and in radio adaptations of several of his films. 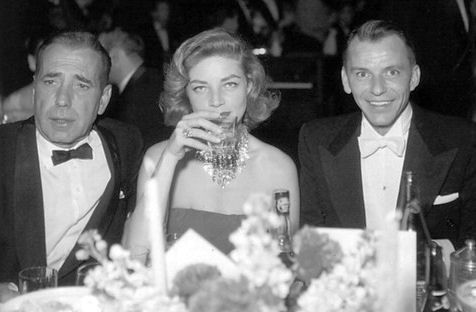 By 1955, Bogart had developed esophageal cancer, as the result of heavy smoking and drinking. His health continued to fail and weaken him as his illness progressed. One day after Frank Sinatra, Tracy, and Hepburn visitied Bogart, Bogart lapsed into a coma. He passed away on January 14, 1957, at 57 years of age.

Bogart was cremated and interred in a private garden in Forest Lawn Memorial Park–Glendale. In his niche, Bacall included a small, gold whistle which had been part of a charm bracelet he had given to her before they married. The whistle carried the inscription, “If you want anything, just whistle” alluding to one of their scenes in To Have and Have Not. 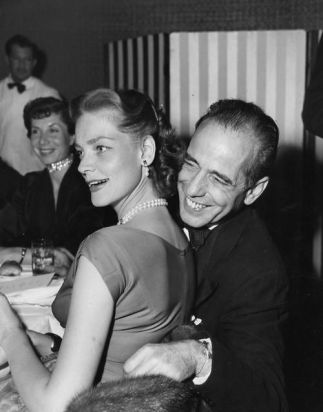 Today, there are may locations in existence that were of relevance to Bogart and celebrate his legacy.

Bogart resided at 245 W. 103 St in New York City. The home still stands today and is marked with a plaque above the doorway, in addition to the street 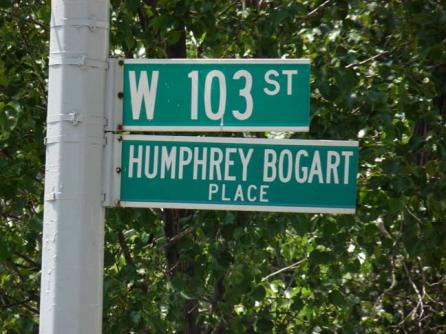 Later, the Bogart family moved to 79 East 56th Street in New York. That home no longer stands. The home Bogart shared with his first wife, Helen Merken, at 43 East 25th Street has also been razed.

Bogart and Merken’s marriage records were kept by St. Ann’s Church for the Deaf-Mutes, since Merken’s parents were deaf. The church stood at 511 West 148th Street. It disbanded in 1949.

Bogart’s final New York home was located on 434 E. 52nd St. This is what the property looks like today: 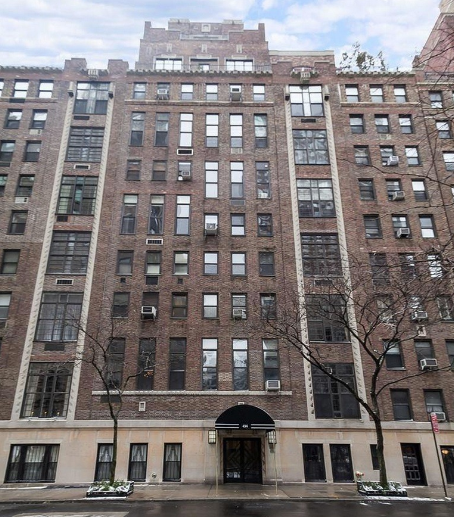 Bogart’s first California home was in the Garden of Allah Hotel, located at 8152 Sunset Blvd. It was demolished in 1959.

In the 1930s, Bogart lived at 6310 Rogerton Drive in Los Angeles, California. Here is the home today:

In 1940, Bogart resided at 8787 Shoreham Dr. in Beverly Hills with Methot in addition to a property at 1210 N Horn in Los Angeles. Both no longer stand.

Bogart and Bacall married at Malabar Farm in Ohio, which remains today at 4050 Bromfield Rd. in Lucas, Ohio. Photos of the couple are on display at the property. 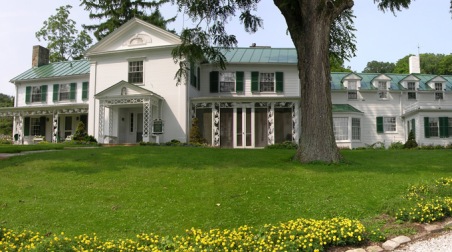 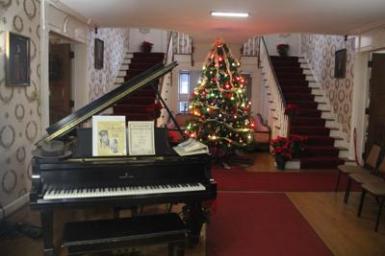 In 1951, Bogart and Bacall resided at 2707 Benedict Canyon in Beverly Hills. This is the location at present: 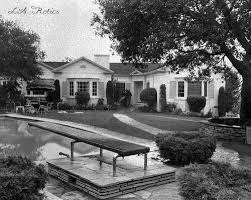 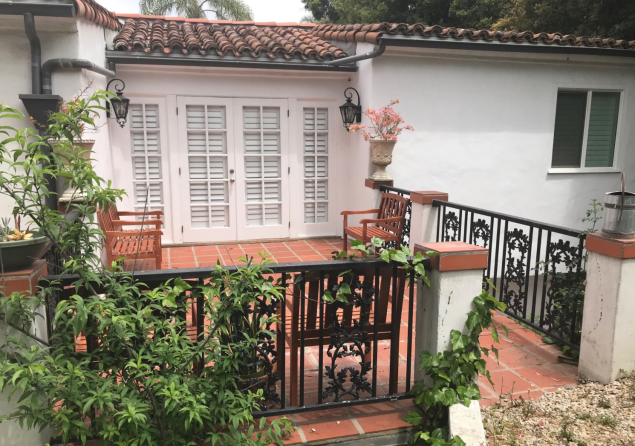 They would also own a home at 2325 Mapleton Dr. in Los Angeles, California. Here, members of the Rat Pack would also gather regularly, with Bacall giving them their famous nickname. Bacall was dubbed their Den Mother, while Bogart was their Director of Public Relations. This is the location today: Bogart’s yacht, Santana, is privately owned and has been refurbished to preserve the vessel. As of 2017, she won the Classic Division of the Vineyard Cup for the second year in a row. 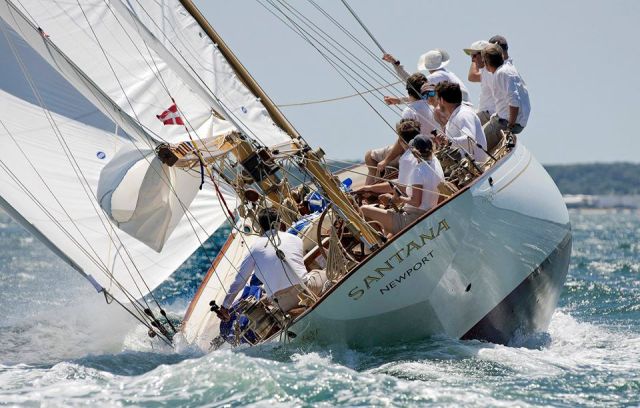 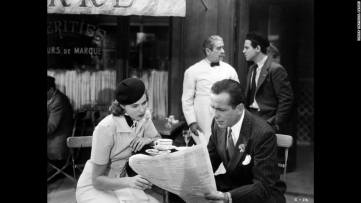 Additionally, Bogart and Bergman’s costumes from the film are also on display.

The studio’s prop department also has a Maltese Falcon statuette on display, in addition to various prop pieces from Casablanca. 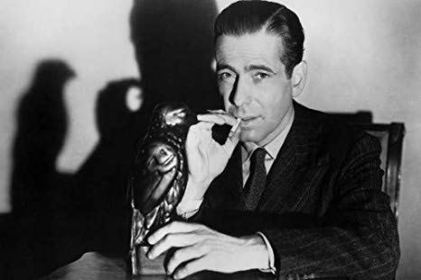 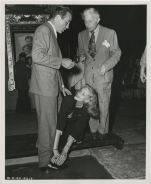 He also has a star on the Hollywood Walk of Fame. His star is located at 6322 Hollywood Boulevard.

To this day, Bogart continues to be remembered by his children and film fans all over the world.