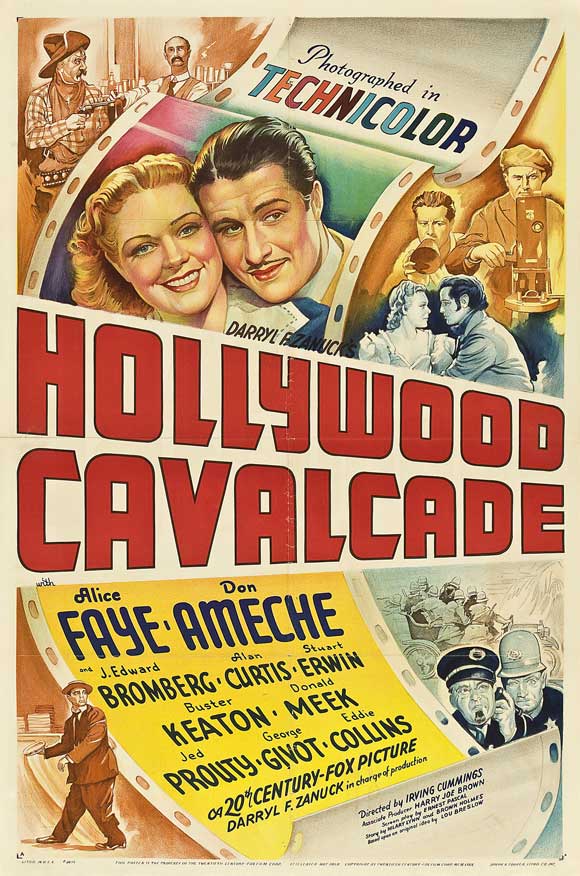 The early 1900s were a fascinating time in cinematic history. Film was considered a novel but intriguing form of entertainment that would soon give way to a brand new industry. Moreover, film would have its fair share of pioneers—aspiring actors, directors, writers, etc.—eager to go West and cultivate a successful career in Hollywood.

This era soon produced the first film celebrities, who would be featured prominently in a wide array of silent films. While film history celebrates the achievements of individuals involved in the creation and production of films, there is something especially noteworthy about these early figures in film. Some of their accomplishments may seem like the standard for moviemaking today or are perhaps viewed as outdated. Nonetheless, it is worth noting that just about all of their attempts on film were being done for the first time. 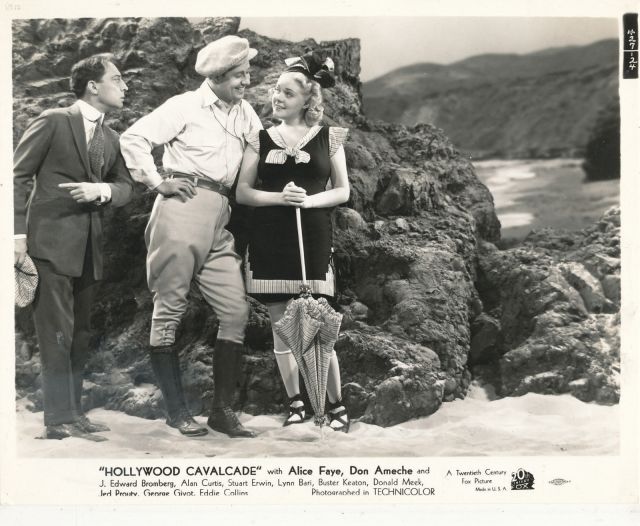 Set in 1913, Hollywood Cavalcade (1939) tells the story of aspiring film director Michael Connors (Don Ameche) who discovers Molly Adair (Alice Faye) when she appears on a Broadway stage, understudying a key role and delivering her lines with panache. He persuades her to have him become her manager and they develop a business partnership. Molly, Michael, and his cameraman, Pete Tinney (Stu Erwin) travel to Hollywood to eventually find success in the silent film industry. 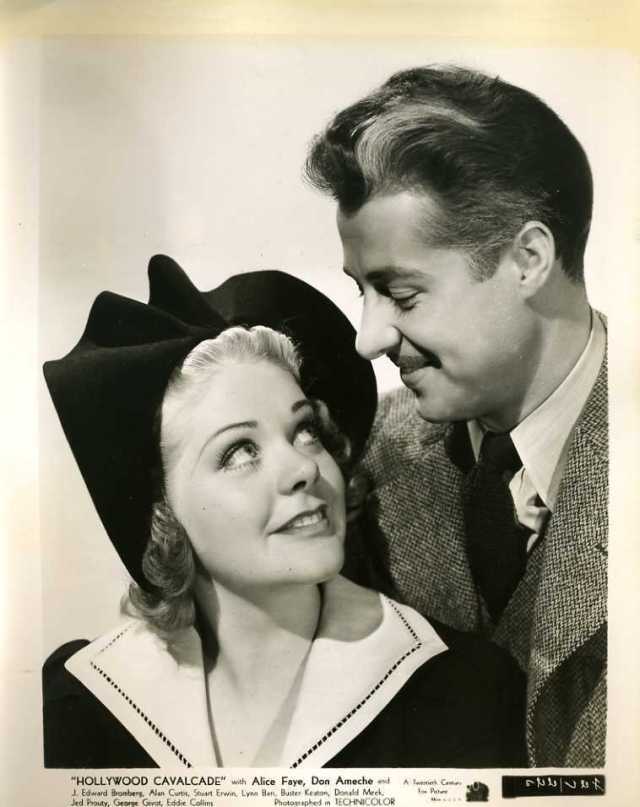 After gracefully taking a pie in the face from Buster Keaton, Molly demonstrates a knack for comedy. Michael devotes himself to making Molly a star, while Molly falls for Michael along the way. However, Michael’s appears to be more interested in movies than he is in Molly. As a result, Molly marries her leading man, Nicky Hayden (Alan Curtis), which causes Michael to realize his feelings for Molly.

Unlike Alice Faye’s usual films for 20th Century Fox, this film is not a musical and is more dramatic than it is comedic. It parallels Hollywood’s own development, depicting vaudeville, silent film, and the transition to sound. The characters themselves are caricatures of various early film stars. From afar, the plot of Hollywood Cavalcade seems to parallel a situation of unrequited love in the life of Mabel Normand; Mabel loved director Mack Sennett but he did not express romantic interest in her. In fact, Darryl F. Zanuck actually hired Mack Sennett to serve as a technical advisor for this film. Molly’s character occasionally pays tribute to Gloria Swanson and Greta Garbo in her smooth transition to sound, while Michael Connors’ role nods to D.W. Griffith and Eric Von Stroheim. 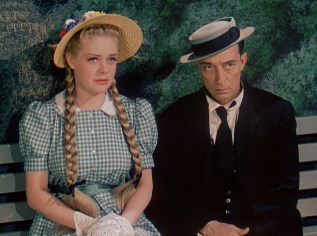 Hollywood Cavalcade was the first film Alice Faye shot in Technicolor. Incidentally, it was also the first film to combine black-and-white and color film stocks. Additionally, this was one of the first films to take a retrospective view of filmmaking history. Interestingly, the biggest draw to the film for me was that it was shot early enough to include several early film pioneers. While the film stars Alice Faye, Don Ameche, and Stu Erwin, viewers can equally appreciate the cameos of figures who were especially important to the days of silent film. 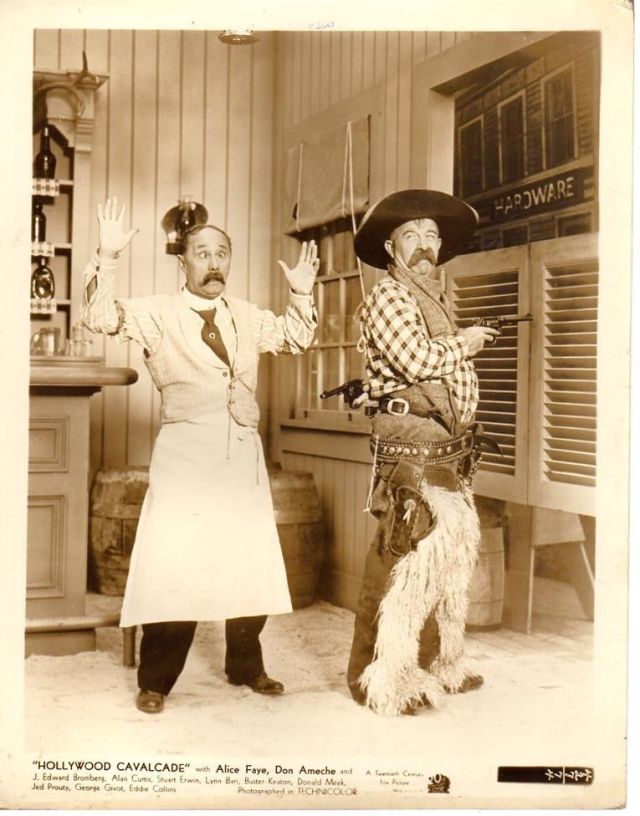 Buster Keaton appears as himself, and several original Keystone cops play themselves. In fact, Buster Keaton directed several of the silent film scenes for this film, while former silent film director Malcolm “Mal” St. Clair directed several more. Additionally, Ben Turpin, Chester Conklin, Snub Pollard, recreate several Sennett-era gags. Rin Tin Tin Jr. also makes delightful appearance as his famous father near the end of the film. True to form, the silent scenes are shot in black-and-white and portrayed in a smaller aspect ratio than the rest of the film.

Moreover, Mack Sennett himself makes an appearance in the film at an awards ceremony. As if this were not enough, Al Jolson is also on hand to recreate the cantor scene from The Jazz Singer (1927). Michael Connors goes to witness the Vitaphone system himself and in a rare Hollywood moment, a film made by 20th Century Fox acknowledges a major achievement by Warner Brothers.

While certainly not one of the best films to come out of 1939, Hollywood Cavalcade is a film that is sure to entertain movie lovers who can take note of the many cameo appearances and can have fun separating Hollywood fact from fiction.

This post is part of the Classic Movie Blog Association’s Fall 2016 Blogathon, entitled, “Hollywood on Hollywood.” 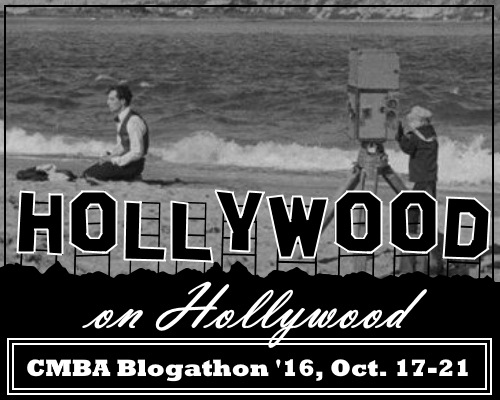