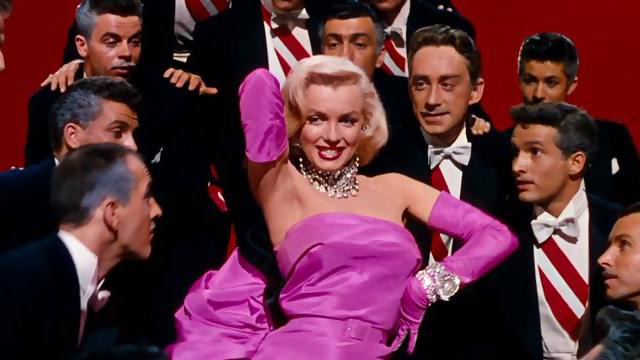 “I can be smart when it’s important, but most men don’t like it.” –Marilyn Monroe as Lorelei Lee

Gentlemen Prefer Blondes (1953) is nothing short of memorable. In addition to a lively soundtrack, witty dialogue, and gorgeous costumes, it features the dynamic pairing of Marilyn Monroe and Jane Russel. Moreover, it is also the film in which Monroe proclaims that diamonds are a girl’s best friend while dancing in her iconic pink dress in front of a male dance chorus. However, there is more to this musical than the famous “Diamonds” number.

Based upon a 1949 stage musical of the same name by Anita Loos, which, in turn, was based upon the original 1926 play, the musical comedy film was directed by Howard Hawks. The story was inspired by an ocean voyage to Europe that Loos took on a boat along with the US Olympic Team. Starring Russell and Monroe, along with Charles Coburn, Elliott Reid, Tommy Noonan, George Winslow, Taylor Holmes, and Norma Varden as supporting characters, the film brims with humor, strong female characters, and captivating musical numbers. The songs by Jules Style and Leo Robin originate from the stage production, while additional songs were written by Hoagy Carmichael and Harold Adamson.

The film tells the story of Lorelei Lee and Dorothy Shaw, a pair of American showgirls who also happen to be best friends. Lorelei dreams of attracting a rich husband to be financially comfortable. She happens to be engaged to Gus Esmond, who is naive but devoted to her. However, Gus is under the control of his father. In contrast, Dorothy is attracted to men who are handsome and fit, as opposed to solely chasing wealth. 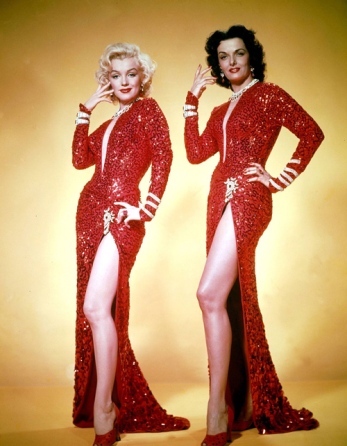 As Lorelei plans to marry Gus in France, his father prevents the wedding, holding that Lorelei is not an ideal match for him. Gus manages to meet with Lorelei and inform her that he will be waiting for her anyway but that she must be on her best behavior as she sails to France. In the meantime, Gus’ father hires a private detective named Ernie Malone to spy on Lorelei.

While Lorelei and Dorothy sail to France, Malone falls in love with Dorothy. She, however, is distracted by the members of the male Olympic team. Lorelei meets Sir Francis “Piggy” Beekman, the owner of a diamond mine, becoming attracted to his wealth–much to the annoyance of his wife. As the relationships evolve, comedy and chaos ensue–particularly in the case of Malone struggling with reporting the events occurring on the voyage and his attempts to have a relationship with Dorothy. While Dorothy is loyal to her best friend, Malone is loyal to his client. 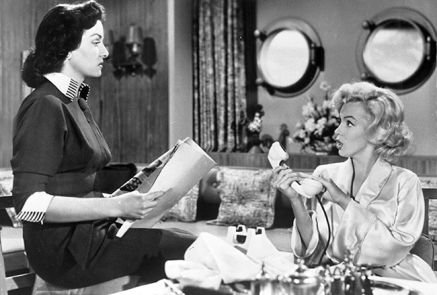 20th Century Fox originally bought the rights to the film as a vehicle for Betty Grable. However, after the success of Monroe’s appearance in Niagara (1953), the studio believed they had a more potent and less expensive sex symbol than Grable. At the time, Grable was earning roughly $150,000 per film in comparison with Monroe’s $18,000. While casting decisions were being made, Judy Holliday turned down the role of Lorelei Lee because she felt no actress other than Carol Channing–who played the role of Lorelei on Broadway–should be cast.

The role of Lorelei was given to Monroe on her 26th birthday while she was filming Niagara (1953). In preparation for her role as Lorelei, though, Monroe attended the Broadway production of Gentlemen Prefer Blondes starring Carol Channing every night for over a month. 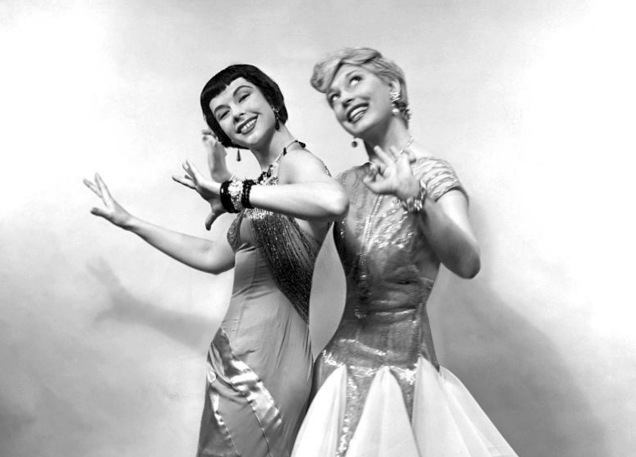 In addition to studying for her role, Monroe was asked to take on more challenges in her acting. During a story conference for this film with Darryl F. Zanuck, director Howard Hawks suggested to Zanuck that the studio change Monroe’s look and screen persona so that Monroe would be more of an actress and less of a blonde bombshell type. The results of the film made Monroe a huge film star in the 1950s and early 1960s. When told she was not the star of the film, Monroe was quoted as saying, “Well, whatever I am, I’m still the blonde.”

Monroe recalled getting along very well with Russell, who was often the only person on the set who could coax Monroe out of her trailer to begin the day’s filming. The two rehearsed together, reportedly being coached by Gwen Verdon. Verdon worked with the two women on their dances and walks. It is rumored that at one point in the film, Verdon dubs both Monroe’s and Russell’s swaying bottoms.

The musical numbers in this film also went through several changes and faced obstacles during filming. In the “Ain’t There Anyone Here for Love?” sequence, Russell’s fall into the pool was an accident. When Hawks saw the dailies, he kept it in the film.

Monroe’s “Diamonds Are a Girl’s Best Friend” number initially called for Monroe’s voice to be dubbed entirely by Marni Nixon. According to Nixon, the studio executives thought her voice was silly. Nixon disagreed and thought that Monroe’s voice suited her persona so beautifully. Nixon told The New York Times in March 2007 that she ended up only dubbing the operatic “no, no, nos” at the beginning of the song, some high notes, and the phrase “these rocks don’t lose their shape.” Additionally, Monroe was originally going to be dressed in nothing but bands of black velvet and masses of rhinestones during the number, creating the illusion of a woman-sized diamond necklace. However, this design was thought of as too revealing and vetoed by the studio in favor of the now-iconic pink dress.

During the “Diamonds Are a Girl’s Best Friend” number, audiences can also spot a young George Chakiris in the chorus of dancers. While the tune became a beloved part of pop culture, the film’s song “Bye, Bye Baby” was recorded by numerous singers in the 1950s and was on the music charts for more than six weeks.

While many fabulous songs did make it into the film, at least one number was cut. In the original theatrical trailer, Russell and Monroe were shown among dancers, climbing the steps of a slide in a children’s playground. The song was a French version of “Two Little Girls from Little Rock.” In the film, Monroe and Russell wear the costumes when backstage in the French nightclub.

The teaming of Russell and Monroe was successful both critically and commercially. In response, Monroe and Russell were honored by putting their hand and footprints in cement in the forecourt of Grauman’s Chinese Theatre. The event garnered further publicity for both actresses and for the film. 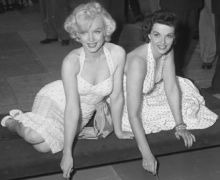 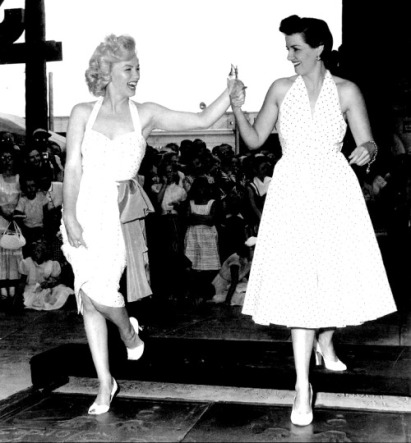 The studio wanted to re-team the duo as soon as possible. A December 1954 mention in The Hollywood Reporter indicated that the studio wanted Russell and Monroe to star in the film How to Be Very, Very Popular (1955). Monroe dismissed the project because she did not like the script. The studio instead cast Sheree North as Curly, the part intended for Monroe; and Grable as “Stormy Tornado”, intended for Russell.

Over 60 years after the release of this film, the story holds up exceptionally well. Moreover, the two lead characters are just as engaging and as glamorous as ever, energized all the more by a fantastic musical score and gorgeous Technicolor.