“All life, no matter how we idealize it, is nothing more nor less than exploitation.” –Friedrich Nietzsche

While films of the Pre-Code Hollywood era boast many shades of sin and scandal, none are quite as salacious and as sexually-charged as Alfred E. Green’s Baby Face (1933), starring Barbara Stanwyck and George Brent. This “fallen woman” film is based upon a story by Darryl F. Zanuck,  showcasing an attractive woman who strategically uses sex to advance her social and financial standing. Stanwyck’s character, Lily, literally sleeps her way to the top throughout the film. Known for its open discussion of sex, the film is considered to be one of the most scandalous films of the era, cited as being one of the top ten films to have prompted the enforcement of the Production Code. 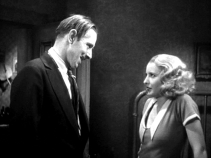 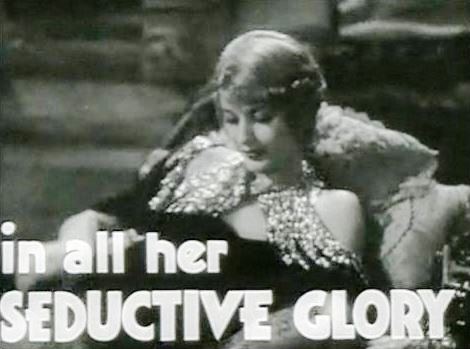 Lily Powers (Barbara Stanwyck) works for her licentious father (Robert Barrat) in a speakeasy during Prohibition in Erie, Pennsylvania. The only man whom she trusts is a cobbler who admires Friedrich Nietzsche and is upset with her lack of ambition. Instead, he motivates her with Nietzsche’s philosophy, propelling her into becoming a determined albeit callous individual. When Lily’s father is killed during a still explosion, she leaves town with her African-American co-worker and comrade (Theresa Harris) to use her power over men for her own benefit. When the pair arrive in New York City, Lily stands in front of the towering Gotham Trust building, silently vowing to one day make it to the top floor. Lily gets a job in the filing department, seducing male after male, while the visual metaphor of her progress is expressed by a camera panning progressively further upward along the Gotham Trust skyscraper as the notes of the “Saint Louis Blues” swell in the background. Along the way, men are driven mad with lust for Lily, leading to their murders, suicides, and financial ruin.

Baby Face (1933) was released by Warner Brothers in response to MGM’s Red-Headed Woman (1932), which was a similarly-themed Jean Harlow film. Zanuck wrote the first draft of the screenplay and sold it for Warner Brothers for one dollar because the Great Depression was in full swing and Zanuck was already making a decent salary. Later, Zanuck would become the head of 20th Century Fox Studios. Baby Face (1933) featured the following cast members:

The initial cut of Baby Face (1933) was so suggestive that it was rejected by the New York State Censorship Board in April of 1933. The plot focused upon Lily’s use of sex to advance her career, though all sex is purely implied. There are no scenes of nudity nor mentions of the word “sex,” but Lily’s rise to higher status is clearly portrayed as a direct result of her sexual advances. Interestingly, one of the more minor professionals who Lily uses to her advantage is portrayed by John Wayne in an early role for him. Moreover, the film included instances of off-screen violence, as well as blatant moments of smoking and drinking in a speakeasy setting.

As a result, the film was banned in several major cities, prompting Warner Brothers Studios to act quickly. In response, the contents of the film were diluted by eliminating Lily’s exploration of Nietzschean philosophy and other sexually suggestive scenes. Revised dialogue and a brand new ending were hurriedly substituted in the film and the New York Censorship Board accepted the remedied version in June of 1933.

While several suggestive scenes remained in the final cut, certain pieces of dialogue at the core of the film’s philosophy were modified in order to ensure a broad release of the film. The cobbler’s urgent advice, inspired by a passage from Nietzsche, initially read as follows:

A woman, young, beautiful like you, can get anything she wants in the world. Because you have power over men. But you must use men, not let them use you. You must be a master, not a slave. Look here — Nietzsche says, “All life, no matter how we idealize it, is nothing more nor less than exploitation.” That’s what I’m telling you. Exploit yourself. Go to some big city where you will find opportunities! Use men! Be strong! Defiant! Use men to get the things you want!

After deliberating with screenwriter Darryl F. Zanuck, Joseph Breen of the Studio Relations Committee concluded that the film could potentially be passed for release if the cobbler’s words invoked a sense of morality instead. Breen rewrote and replaced the cobbler’s speech with the following lines, which were dubbed into the film as part of an over-the-shoulder shot of the cobbler:

A woman, young, beautiful like you, can get anything she wants in the world. But there is a right way and a wrong way. Remember, the price of the wrong way is too great. Go to some big city where you will find opportunities! Don’t let people mislead you. You must be a master, not a slave. Be clean, be strong, defiant, and you will be a success. 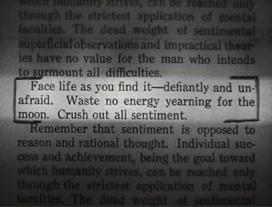 The film’s original ending was also subject to changes, as well. The theatrical release version included a new ending in which Lily and her husband are making an honest living and suggesting a punitive and even redemptive ending for the film’s heroine. The initial ending, on the other hand, was considered lost.

To a Library of Congress film vault worker’s surprise in 2004, another reel of Baby Face (1933) was discovered in the collection, weighing significantly more than the other reel. Upon examining the reel, the worker realized that he had come across the original and uncensored version of the film. This discovery revealed that, initially, the film ended ambiguously, with Lily remaining as callous and determined to advance as ever and exhibiting no remorse for her actions.

The restored and uncensored version of the film premiered at the London Film Festival in November 2004, 71 years after its theatrical release. In 2005, Baby Face (1933) was deemed “culturally, historically, or aesthetically significant” and selected for preservation in the United States Library of Congress National Film Registry.

The film’s depiction of a female sexual predator stirred much controversy and discussion in terms of the depiction of women in Pre-Code films. On one hand, individuals may argue that Stanwyck offers a groundbreaking portrayal of a no-nonsense woman who will stop at nothing to achieve her desires. Stanwyck’s Lily changes from being obedient and abused to a woman who is fully in control of her life, albeit merciless, in order to further her own status and success. At the same time, others argue that these are negative and callous portrayals that complicate the image of women in film. In fact, a Variety article once blamed women as “responsible for the ever-increasing public taste in sensationalism and sexy stuff” and for being the “majority reader[s] of the tabloids, scandal sheets, flashy magazines, and erotic books.” The article even offered the comparison that the mind of the average man was “wholesome in comparison.”

While audience opinions of this film and Stanwyck’s character portrayal will vary, Baby Face (1933) continues to provide ample ground for fruitful discussion to many film scholars and aficionados alike.