Oliver: Do you have to ask your wife everything?

Stan: If I didn’t ask her, I wouldn’t know what she wanted me to do.

Stan Laurel and Oliver Hardy have been in many a fine mess but my favorite one, by far, is their elaborate plot to sneak off to a Chicago fraternal convention in Sons of the Desert (1933). No matter how tricky of a situation I may face, Sons of the Desert always reminds me that my troubles are not quite so bad as the ones faced by Stan and Ollie! As a result, writing about this film is just perfect for the Classic Comfort Movie Blogathon.

In this film, Stan and Ollie play two friends who are members of the Sons of the Desert, a fraternal lodge styled to resemble the Shriners, with members all over the nation. The fraternity’s convention is to be held in Chicago and all members take an oath that promises their attendance. Stan hesitates to take the oath because he worries that his wife, Betty, will not let him go but Ollie pushes him to take the oath anyway. Their fates are sealed as the group sings its ceremonial song, “Sons of the Desert,” a pastiche of several popular tunes, including “Give My Regards to Broadway.” When Stan and Ollie return home, it turns out that Ollie’s wife, Lottie, will not let him go to the convention because she insists that they will be traveling together on a mountain trip.

In a moment of desperation, Ollie feigns illness in order to avoid the trip with his wife. Instead, he arranges for Stan to find someone to pose as a doctor in order to prescribe an ocean voyage to Honolulu for his health. With the wives “none the wiser,” Stan and Ollie head for Chicago. All goes swimmingly until the ship headed for Honolulu sinks. Though they are spared the catastrophic shipwreck, Stan and Ollie suddenly find themselves drowning in their elaborate scheme. In the meantime, the wives catch on to their ploy while each wife blames the other’s spouse as a bad influence. As a result, the wives work hard at getting their respective husbands to confess the truth in order to see which of the husbands is really to blame. 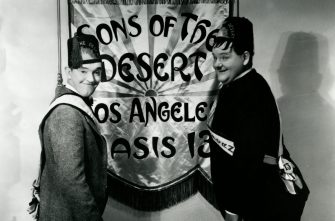 While Sons of the Desert is the more famous realization of this particular Laurel and Hardy plotline, the film is actually based upon an earlier Laurel and Hardy works. The earliest one to portray this story is We Faw Down (1928). In We Faw Down, Stan and Ollie tell their wives they have a business engagement at the Orpheum Theater but actually sneak off to a poker game. In the meantime, the Orpheum Theater is gutted by a fire. The wives, of course, demand to see what their husbands saw at the show. Two years after We Faw Down, Laurel and Hardy appeared in another short that echoes a similar plot. In Be Big (1930), Stan and Ollie are en route to Atlantic City for a trip with their wives. Along the way, they are invited to a stag party. In order to attend, Ollie feigns illness. The wives go on to their travel destination, while Stan stays behind to look after Ollie and another fine mess ensues. 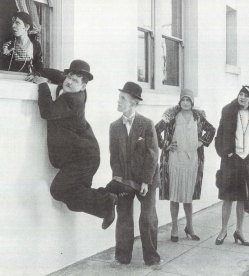 Sons of the Desert, released as Fraternally Yours in the United Kingdom, features a fabulous cast of characters, each with a perfect knack for comedic timing. Classic comedy fans will no doubt recognize many of these names from other Laurel and Hardy films as well as many other comedies. The full cast list is as follows:

The film’s comic take on marital strife mirrored the far more serious domestic problems that Laurel, Hardy, Charley Chase, and director William A. Seiter were experiencing at the time. Behind the scenes of this three-week shoot that was released ahead of schedule and $10,000 over budget, both Laurel and Hardy were involved with other women after being estranged from their wives. Hardy was distanced from his wife, Myrtle. He was rumored to be seeing Lillian DeBorba, mother of child actress Dorothy “Echo” DeBorba. Laurel was seeing Virginia Ruth Rogers, though his divorce from his first wife had not yet been finalized. 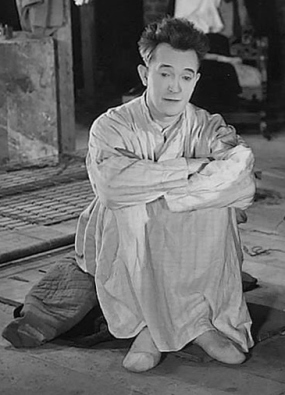 Both Lillian and Virginia appeared in Sons of the Desert. Lillian filled in a seat during the movie theater scene, sitting in front of Mae Busch and Dorothy Christy. Virginia filled in as a crowd scene extra but also stood closely by during the filming of the rooftop downpour scene. When a soaking wet Laurel finished shooting, she threw a towel around him, rushed him to his dressing room, ran a hot shower, and made him a hot toddy of whiskey, lemon, and sugar. According to Virginia, Laurel began to cry in gratitude, noting how his wife never took any interest in his work or showed her concern for him in that way. Rogers would later become his second and fourth wife.

During filming, Charley Chase also had numerous difficulties at home because of his drinking. At work, Laurel found Chase to be very easy-going, delightful, and much quieter than his on-screen persona suggested. In an interview with Oliver Hardy impersonator Chuck McCann, Laurel mentioned that during a rehearsal he reached for what he thought was his glass of water and grabbed Chase’s by mistake. He instead found a tumbler full of gin, as Chase was a known alcoholic. Though his appearance in the film is brief, his portrayal of Mrs. Hardy’s intoxicated brother is memorable. Chase, however, disliked the part because he thought it was too far removed from his typical on-screen character. 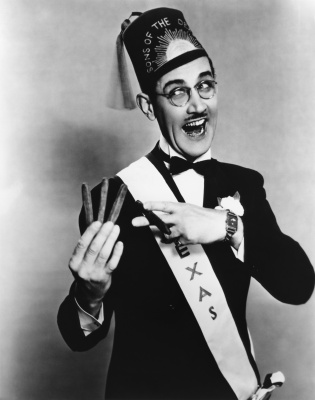 In the meantime, Director William A. Seiter was in the process of splitting from his first wife, Laura La Plante. Looking back on the full body of Laurel and Hardy’s works, Hal Roach believed that Seiter had more control than any of their other directors. Roach held that Seiter was “genial, competent, and the kind of director who had a good sense of building the story whilst also focusing hard on characterization.”

Though many of the cast and crew members were experiencing difficulties at home and were working on multiple projects, they did find time to laugh on set. Laurel and Hardy would briefly take time off from filming this feature in order to shoot their sequences for Hollywood Party (1934), but scenes had to be re-shot frequently before and after their departure. This was because the director and crew would often break up in laughter while filming. According to film historian Richard W. Bann, a specialist on the films produced by Hal Roach Studios, Hal Roach recalled in 1979 how often such things happened on set. “I was never upset that it was costing me money,” said Roach. “I was upset that we couldn’t use some of the funniest scenes we saw every day.”

Sons of the Desert would simply not be the same if it were not for Mae Busch and Dorothy Christy, who play Laurel and Hardy’s wives and perfect foils in the film. The role of Laurel’s wife was originally intended for Patsy Kelly, but Roach had loaned her to MGM for the film Going Hollywood (1933). The film was running behind schedule when shooting for Sons of the Desert began, so Dorothy Christy joined the cast four days into filming. Mae Busch, on the other hand, was well seasoned at playing Oliver’s typically high-strung and short-tempered wife. Sons of the Desert would be Busch’s fourth time taking on the role of Oliver’s wife. 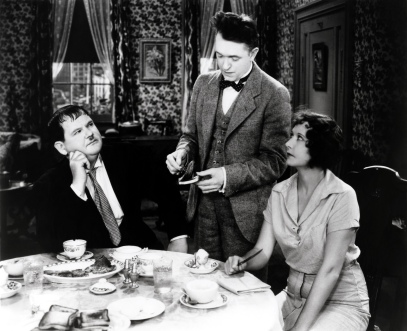 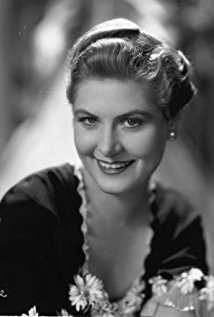 Additional supporting actors a were used to bring the Sons of the Desert convention scenes to life. Marvin Hatley, musical director at the Roach Studios, acts as the club pianist. Ty Parvis sings Hatley’s “Honolulu Baby,” the film’s other key musical number, as Charita Alden and a chorus of hula dancers glide along to the music.

Though the film features many hilarious scenes, one sequence did not make the cut. In the original script, the parade scene in the middle of the film was to include an extended sequence of the boys causing mayhem as they participate in–and subsequently ruin–a bicycle procession.

Brimming with allusions to various fraternal organizations, the film involved many individuals who indeed belonged to them in real life. Members of Oasis 13 which the Boys visit at the start were actually members of the Hollywood Legion Post. The parade newsreel was supplemented with stock footage from the Elks Lodge state convention held in Santa Monica, CA, some months earlier. According to the press book for the film and a Hollywood Reporter news item, extras in the newsreel footage of the convention parade included members of the Glendale post of the American Legion, the Hollywood American Legion and the Santa Monica Elks Lodge.

Among the stories planted by studio publicists was one stating that during production, cast and crew formed their own “Sons of the Desert” fraternal order, electing Laurel “High Factotum” and Hardy “Good Knight.” Seiter, according to the story, was named “Sergeant Without Arms.” Three decades after the movie’s release, its motif inspired the creation of a Sons of the Desert, an “international Laurel and Hardy appreciation society.” The society is named after the film and was created by Laurel and his biographer John McCabe. Their first international convention was held in 1978 in Chicago, of course. Today, the Sons of the Desert have “tents” or local chapters all over the world.

Whether you are in Honolulu for health or in Chicago for fun, there’s likely a Sons of the Desert chapter waiting for you to join! 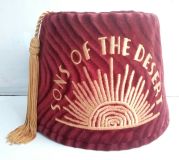 This post is part of the Classic Comfort Movie Blogathon, hosted by Classic Film & TV Cafe. To access more information and read accompanying posts, please click on the following picture: 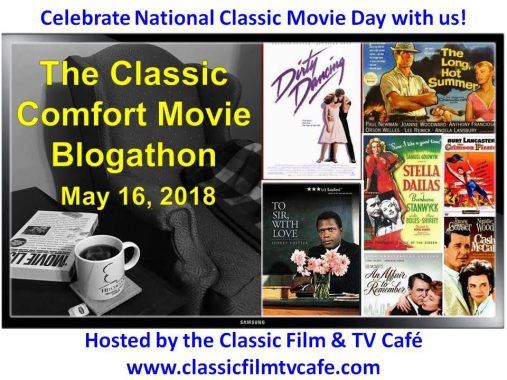 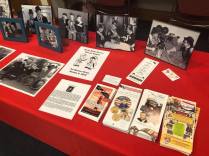