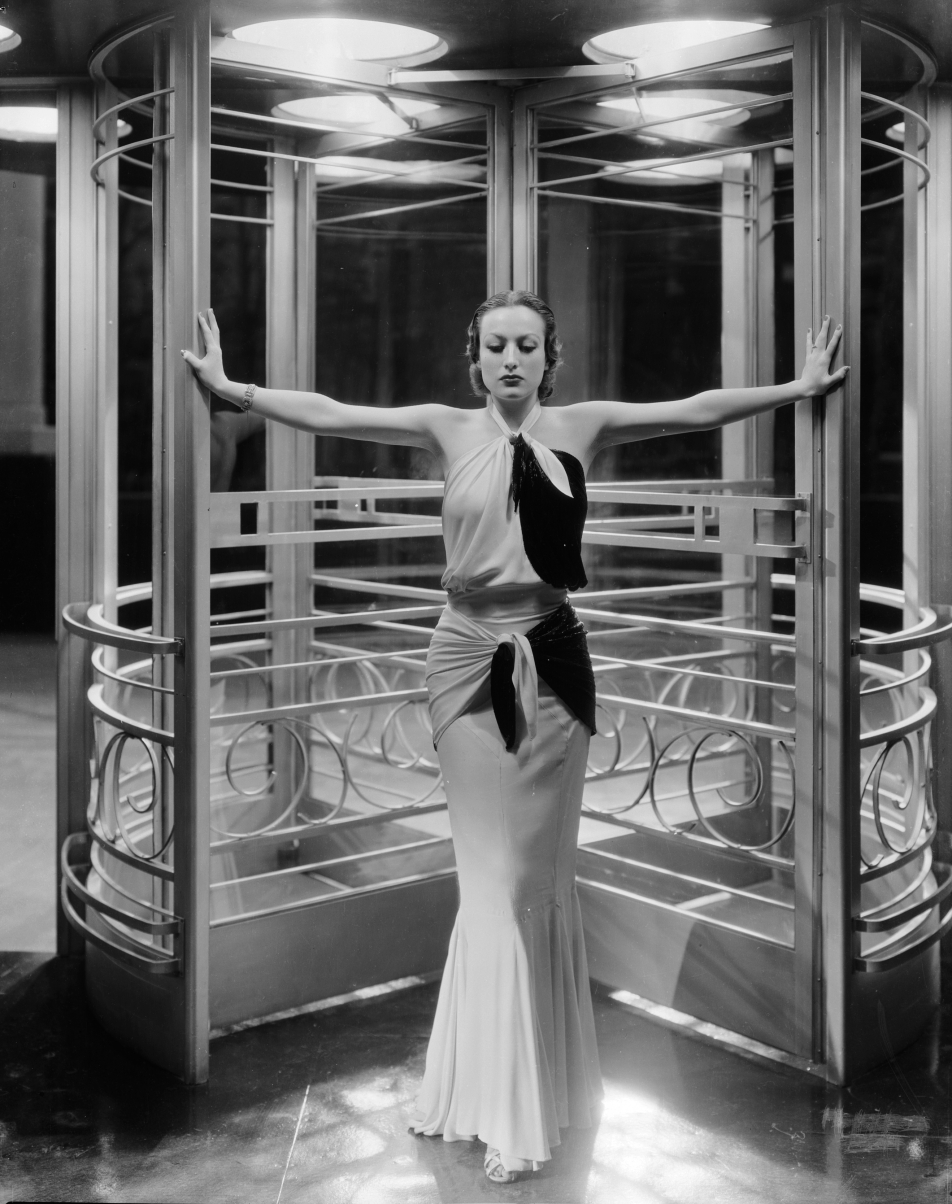 Have you looked in the mirror lately? I don’t mean the one hanging over your bathroom sink, the rearview in your car, or a department store trifold. I mean the mirror that throws back an image of more than just you—the one that reflects your culture, the values of your time, personifies your point in history, and projects an image of your society. I mean the biggest, boldest mirror of them all: the silver screen.

The films that resonate with us ultimately teach us about our own identity. Not only do they teach us about the norms and taboos of our culture, but they also cater to the likes and interests of specific audiences. Likewise, the costumes, actors, script, and scenery are tailored to what is typically relevant in the present. The motion picture industry very much wants to “give people what they want,” and strives to tell a story in an artful and appealing form. 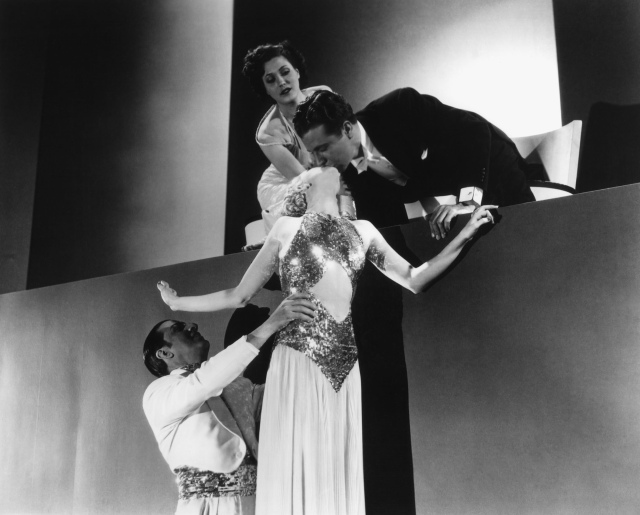 However, there are many factors to be considered when creating a worthwhile final product. It needs to be worth the price, worth the time, and, more importantly, worth the escape. Within this endeavor is a part of making any magical cinematic illusion believable, including where characters go, what they do, and what they wear. Perhaps one of the most interesting factors of “Screen Deco” is exploring the aspect of women’s fashion during the 1920s and its impact upon costume design for films being created in the same decade.

The Art Deco movement initiated in the 1920s, with major historical events revitalizing and energizing our nation. Within this time frame, women’s liberation was gaining strength and support, our economy was experiencing a wonderful boom, and technology continued to advance. The era was progression personified—highlighting all that was modern, embracing new and abstract ideas about the future, and mixing luxury with leisure.

The Art Deco period influenced fashion especially for women, allowing them to seamlessly shift personas by varying outfits. Women’s image can be characterized through three main stylistic icons: the Flapper, the Goddess, and the Athlete. 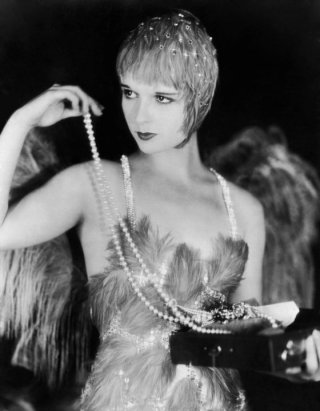 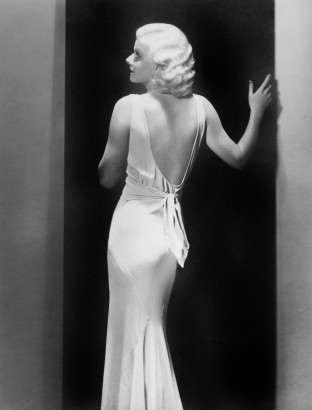 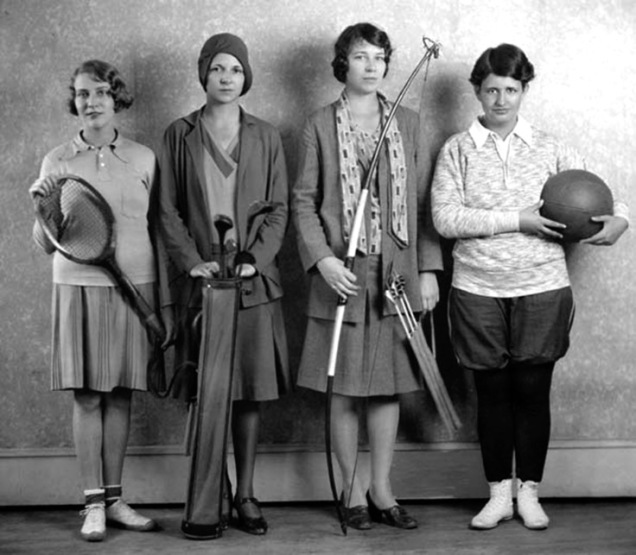 The Flapper’s image erupted from the repressed Victorian styles with boldness and fury. Women were seeking equality at the time in terms of suffrage and employment (due to the men mostly fighting in the War) and wanted to look and feel like their male counterparts. Rather than hide their figures in thick tufts of fabric and scrunch their forms into stiffening corsets, women rebelled against tradition and revamped the feminine image.

Long tresses were cut, skirts were shortened, and women sought a fashion that was closer to the characteristics of male clothing. Women were also no longer as sheltered, feeling that they should not be dependent upon men and should have similar freedoms. As a result, women drove, smoked, kissed, and danced in public.

Looking at flapper fashion, one can notice designs and patterns that are reflected in the characteristics of Screen Deco. While the clothes are boyish, they are noticeably streamlined and tubular. There are also often geometric, angular designs on the fabric, which were typically paired with a cloche hat and rolled stockings. 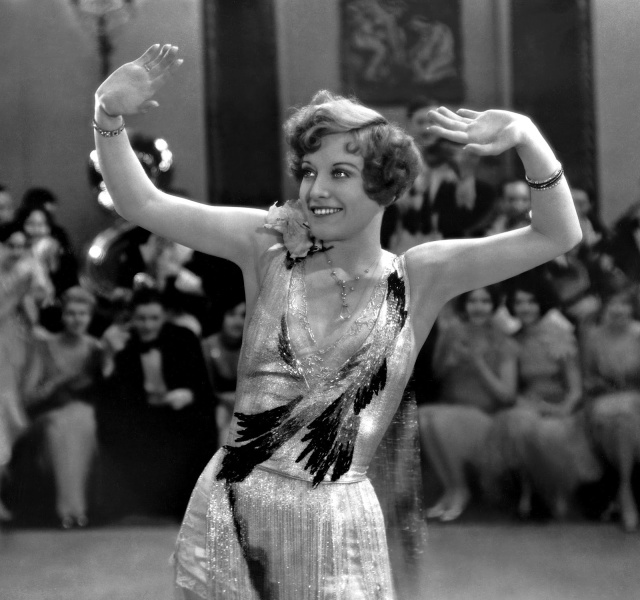 The actresses of Screen Deco boasted costumes that reflected this time period, particularly the feisty flappers in Our Dancing Daughters. Women like Marie Prevost, Marion Davies, Joan Crawford, Louise Brooks, Dorothy Sebastian, Clara Bow, Anita Page, Barbara Stanwyk, Norma Shearer, etc., were all portrayed as flappers at one point in their careers. Some of them remain iconic flappers of their era to this day.

Industry boomed between the two world wars, and so did nonessential luxuries (prior to the Depression, of course). Emphasizing the flashy and fancy, the image of the goddess was born. Women like Carole Lombard and Greta Garbo posed wearing expensive jewelry and gowns, while gorgeous mansions with elegant cars appeared across the nation. Moreover, people began to frequent the cinema once again, and obsessed over movie stars and their exquisite wardrobes. 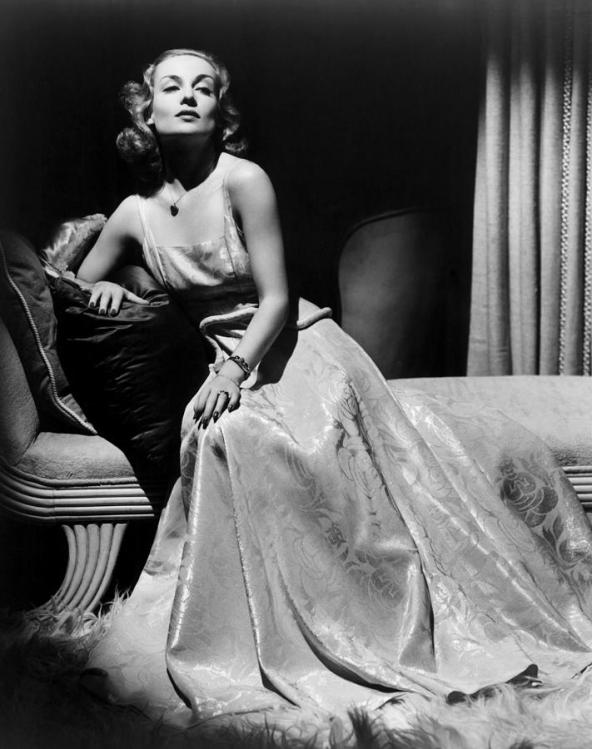 The Hollywood lifestyle also portrayed luxury and glamour during thriving economic times. Glamorous stars like Jean Harlow slipped out of long limousines, sporting sleek gowns of silk, satin, taffeta, and chiffon, while enveloped in soft furs. Dresses emphasized a mermaid silhouette, with lengthy, sweeping hemlines, often embellished with geometric designs. It was celebrities like Harlow who were the trendsetters of the time, especially in terms of the platinum blonde hairstyle.

However, in a world of financial stability, not everyone was limited to the image of being a goddess surrounded by luxury. As Coco Chanel said, “Fashion is not something that exists in dresses only. Fashion is in the sky, in the street—fashion has to do with ideas: the way we live, what is happening.” Truthfully, women were experiencing the world much more than they used to at this point, and many people engaged in exotic travels and outdoor activities. 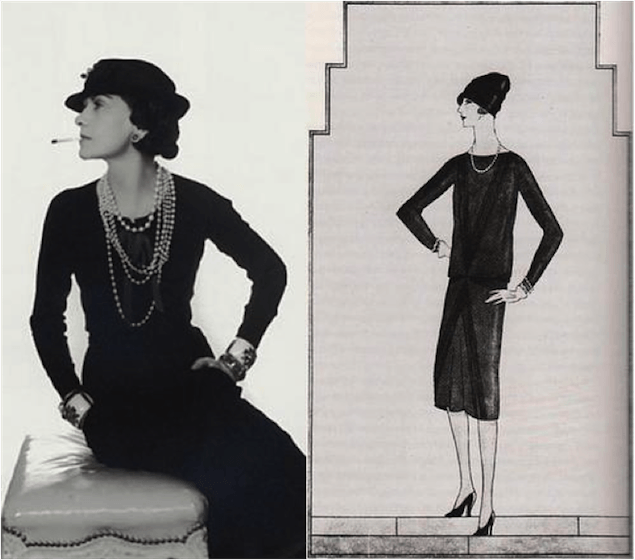 A growing interest in sports, leisure, and travel called for fashion to accommodate these activities. Leisure clothing still emphasized style and elegance, but it had to be comfortable and loose, rather than restricting. Just like all Deco costumes, clothing had to be both functional and aesthetically appealing.

Chanel, in particular, excelled in this category. She produced effortless, streamlined outfits with single color schemes and simple silhouettes. Her clothes sported dropped waists, pleated dresses and skirts, masculine jackets, and the then-shocking idea of women’s trousers. Marlene Dietrich was one of the first females to wear pants in film, while Katharine Hepburn went on to popularize them. 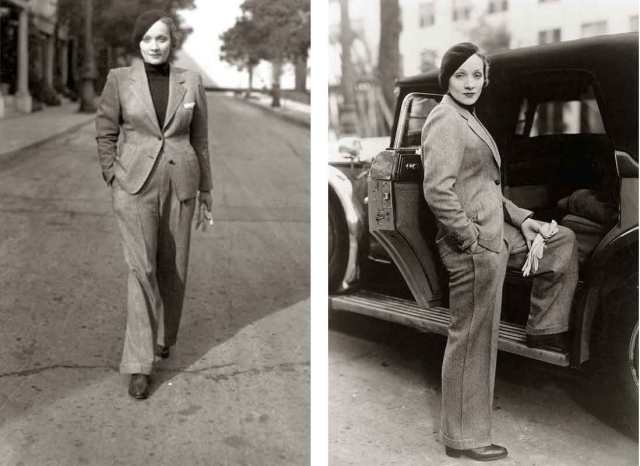 While fashion has certainly changed over the years, so has our society. The fluctuation of what is considered to be fashionable is a history of its own, as it parallels the popular values of society during a specific moment. Some outfits even reach the point of being historic and end up preserved in museums for guests to observe.

As far as Screen Deco, one beautiful gown was recently auctioned off from the Debbie Reynolds estate—Claudette Colbert’s Cleopatra gown.  Designed by the talented Travis Banton, the gown gave the heroine of the film a goddess-like image in her seduction of the leading man. The striking piece sold for $40,000 in June of 2011. 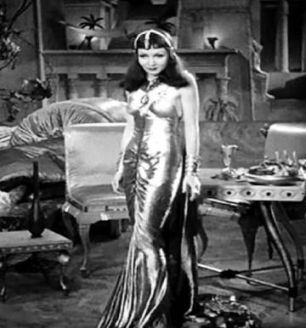 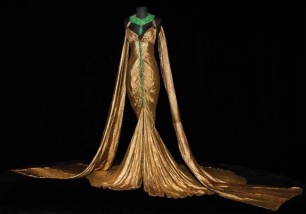 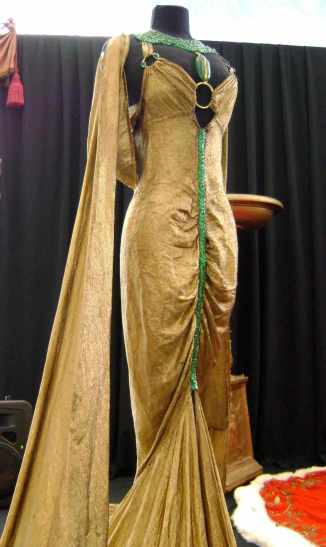 The fact that this gown survived for nearly 75 years in beautiful condition speaks to the loveliness of Screen Deco and its importance in movie history. The period truly paralleled a celebration of prosperity and affluence, while adapting functionality in a guise of splendor. When viewing Deco films, it is truly a delight to see the imagination involved in costume and design, in order to portray an assumed future of fortune.

Today’s less extravagant fashions add to the contrast between our world and the glitzy Deco fantasies that remain in some of the best films. Deco is dreamlike to most of us, and even a memory to some, but it is justly a style that has made its mark upon cinema, fashion, and architecture. Deco granted us a portrayal of optimistic style during a prosperous time, and its influence will no doubt continue to be studied and respected. As Yves Saint Laurent aptly put it, “Fashions fade, style is eternal.” 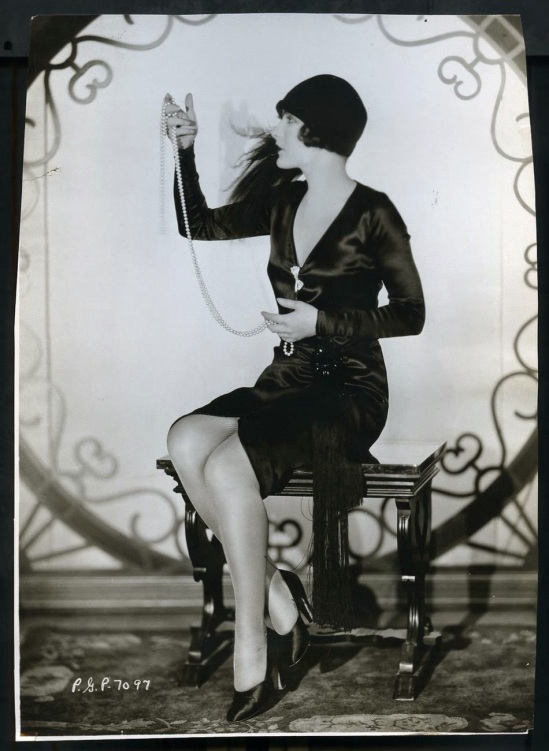