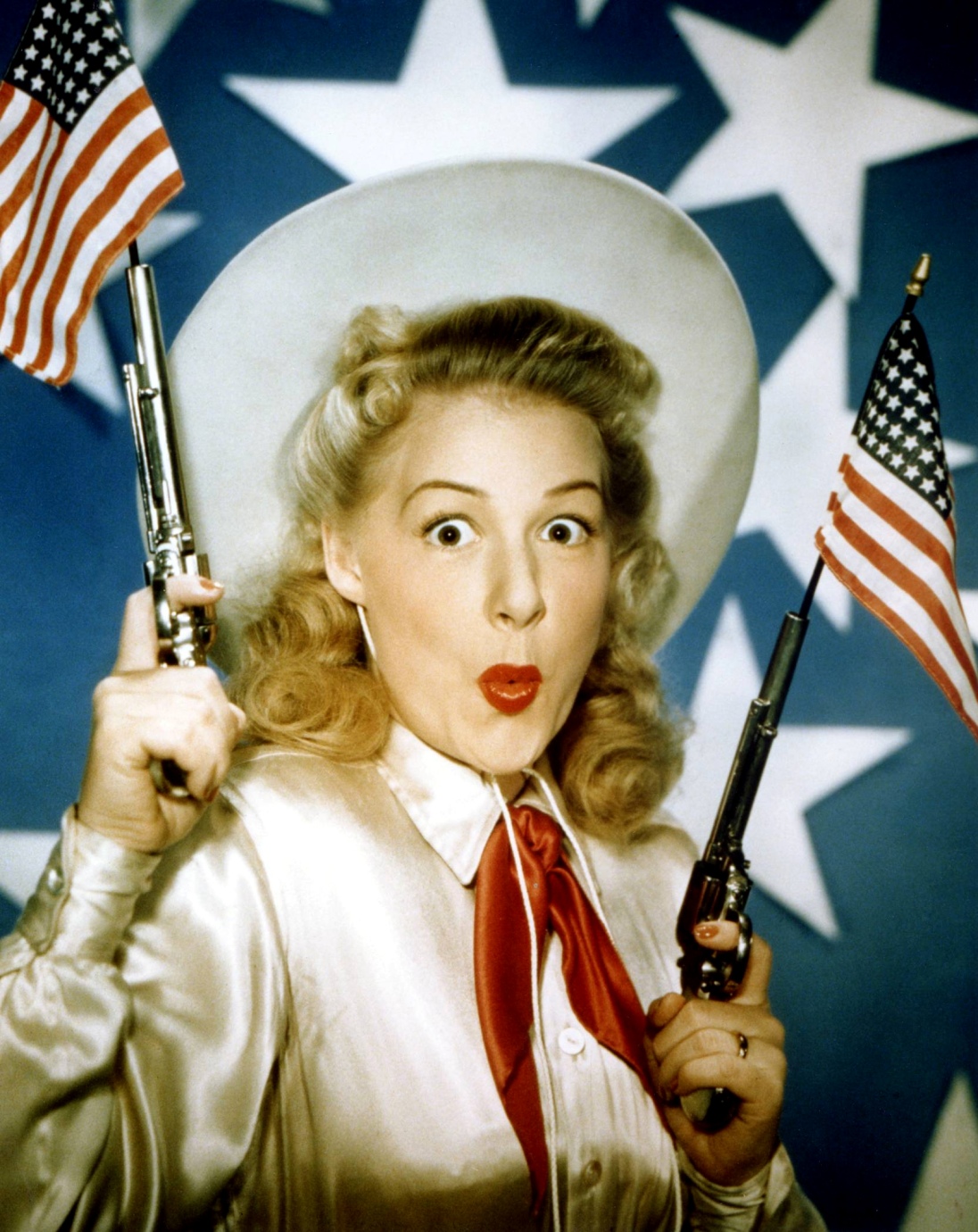 “I worked out of desperation. I used to hit fast and run in hopes that people wouldn’t realize that I really couldn’t do anything.” -Betty Hutton

My first introduction to Betty Hutton was while watching a command performance hosted by Bob Hope, thanks to the magic of YouTube. After her exuberant performance of “Murder, He Says,” Hope refers to her as a “vitamin pill with legs.” She was indeed the personification of boundless energy, but she also, according to a 2000 interview with Robert Osbourne, was a person who “wore her heart on her sleeve.” She would gradually retire from the movie industry and shift away from the public eye.

Elizabeth June Thornburg was born in Battle Creek, Michigan, as the daughter of a railroad foreman and his wife. Her father abandoned the family for another woman early on during Betty’s childhood. The family would not hear of him again until they received a telegram in 1939, informing them of his suicide. Along with her older sister Marion, Betty was raised by her alcoholic mother, who took the surname Hutton and was later billed as the actress Sissy Jones. 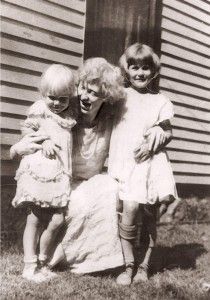 From Satins and Spurs

The three started singing in the family’s speakeasy when Betty was 3 years old, but trouble with the police kept the family on the move. They eventually landed in Detroit, where Betty would attend Foch Intermediate School and Southeastern High School.

Hutton sang in several local bands as a teenager, and at one point visited New York City hoping to perform on Broadway, where she was rejected. A few years later, she was scouted by orchestra leader Vincent Lopez, who is credited with giving Hutton her entry into the entertainment business.  Betty’s sister, Marion, also sang with Lopez and would go on to sing with the Glenn Miller Orchestra. In 1939, Betty appeared in several musical shorts for Warner Bros., and appeared in a supporting role on Broadway in Panama Hattie and Two for the Show. Both shows were produced by Buddy DeSylva. 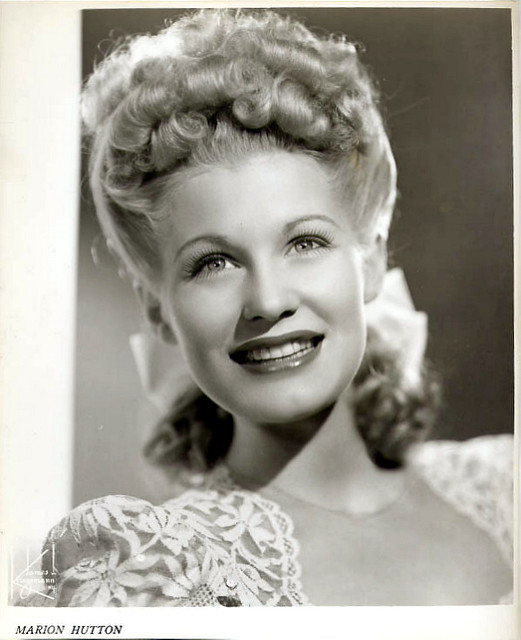 When DeSylva became a producer at Paramount Pictures, Hutton was signed to a featured role in The Fleet’s In (1942), starring Paramount’s number one female star, Dorothy Lamour. Hutton was an instant hit with the movie-going public. Paramount did not immediately promote her to major stardom, however, but did give her a second lead in Star Spangled Rhythm (1943) and another Lamour film and co-star billing with Bob Hope in Let’s Face It (1943).

In 1942, writer-director Preston Sturges cast Betty as the dopey but endearing small-town girl who gives local troops a happy send-off and wakes up married and pregnant but with no memory of who her husband is, except that there were a few “z’s” in his name. The film made Hutton a major star and Preston Sturges was nominated for a Best Writing Oscar. Although the Hays Office received many letters of protest because of the film’s subject matter, it was Paramount’s highest-grossing film of 1944, playing to standing-room-only audiences in some theaters. 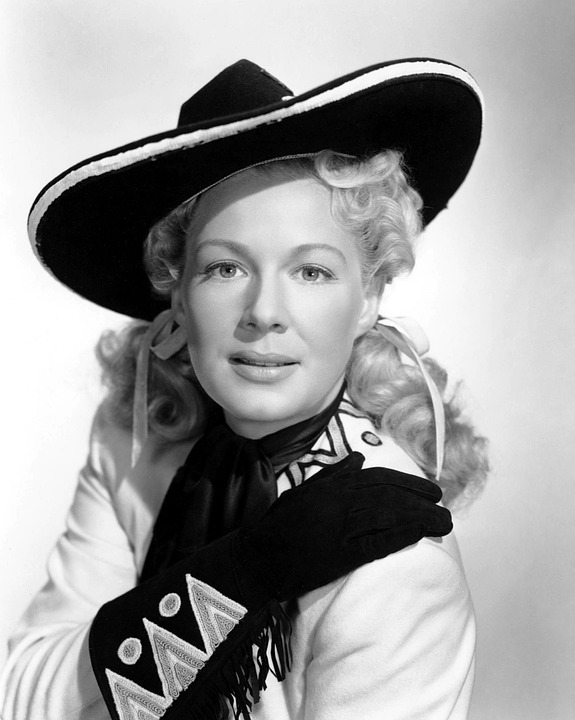 On the strength of her recent success, she was one of the earliest artists to sign a recording contract with the newly formed Capitol Records. Buddy DeSylva, one of Capitol’s founders, also co-produced her next hit, the musical Incendiary Blonde, directed by veteran comedy director George Marshall and released in 1945, by which time Hutton had replaced Lamour as Paramount’s top female box-office attraction. Marshall also directed Hutton in the hugely popular The Perils of Pauline in 1947, where she sang a Frank Loesser song that was nominated for an Oscar: “I Wish I Didn’t Love You So.” 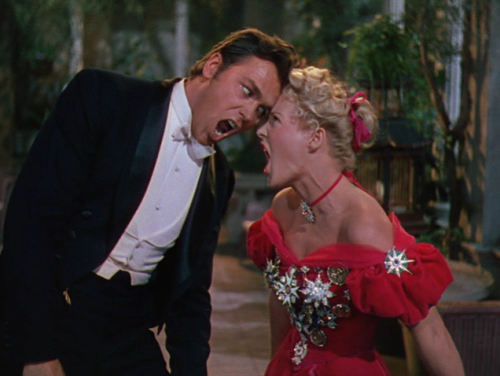 Betty would later encounter more success in the musical genre. She was also billed above Fred Astaire in the 1950 musical Let’s Dance, and her next screen triumph came in Annie Get Your Gun (1950) for Metro-Goldwyn-Mayer, which hired her to replace Judy Garland in the role of Annie Oakley. The film, with the leading role retooled for Hutton, was a smash hit, with the biggest critical praise going to Hutton. She also occasionally took on smaller roles such as an appearance in Sailor Beware (1952) with Dean Martin and Jerry Lewis, in which she portrayed Dean’s girlfriend, Hetty Button.

Altogether, Hutton made 19 films from 1942 to 1952. Her career as a Hollywood star ended due to a contract dispute with Paramount following the Oscar-winning The Greatest Show on Earth (1952) and Somebody Loves Me (1952). The New York Times reported that the dispute resulted from her insistence that her husband at the time, choreographer Charles O’Curran, direct her next film. 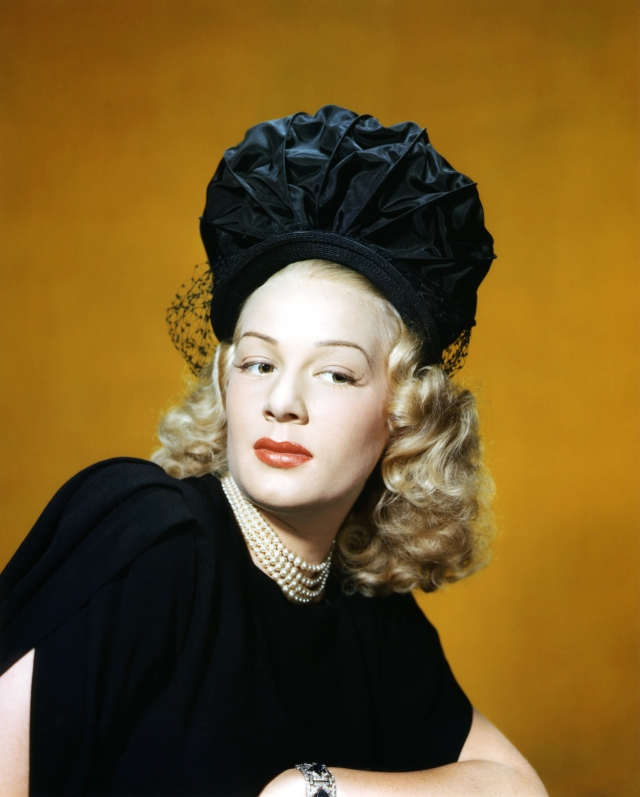 Hutton’s last completed film was a small one, Spring Reunion, released in 1957, a drama in which she gave an understated, sensitive performance. Unfortunately, box office receipts indicated the public did not want to see a subdued Hutton. Hutton later found work in radio, appeared in Las Vegas and in nightclubs, and also made several television appearances.

After the 1967 death of her mother in a house fire and the collapse of her last marriage, Hutton’s depression and pill addictions increased. She divorced her fourth husband, jazz trumpeter Pete Candoli, and declared bankruptcy. Hutton had a nervous breakdown and later attempted suicide after losing her singing voice in 1970.

After regaining control of her life through rehab, and the mentorship of a Roman Catholic priest, Father Peter Maguire, Hutton converted to Roman Catholicism and took a job as a cook at a rectory in Portsmouth, Rhode Island. She made national headlines when it was revealed she was working in a rectory. 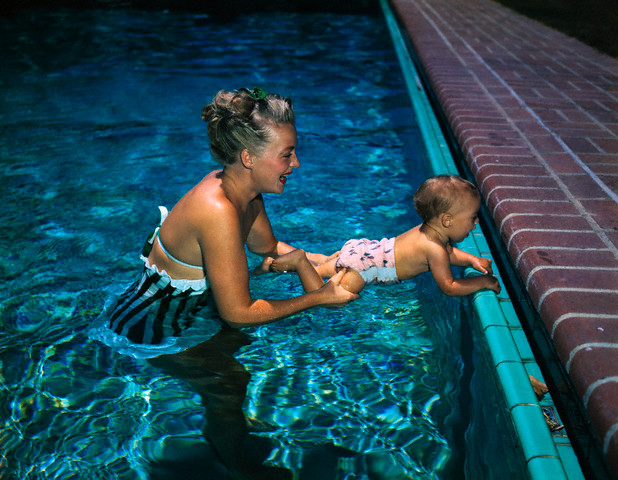 From Comet Over Hollywood

In 1974, a well-publicized “Love-In for Betty Hutton” was held at New York City’s Riverboat Restaurant, emceed by comedian Joey Adams, with several old Hollywood pals on hand. The event raised $10,000 (USD) for Hutton and gave her spirits a big boost, but steady work still eluded her. Hutton appeared in an interview with Mike Douglas and was featured on The Phil Donahue Show in 1977. Hutton was then happily employed as hostess at a Newport, Rhode Island jai alai arena. She also appeared on Good Morning America, which led to a 1978 televised reunion with her two daughters.

Hutton began living in a shared home with her divorced daughter and grandchildren in California, but returned to the East Coast for a three-week return to the stage. She followed Dorothy Loudon as  Miss Hannigan in Annie on Broadway in 1980. Hutton’s rehearsal of the song “Little Girls” was featured on Good Morning America. Hutton’s Broadway comeback was also included in a profile that was done about her life, her struggle with pills, and her recovery on CBS News Sunday Morning. 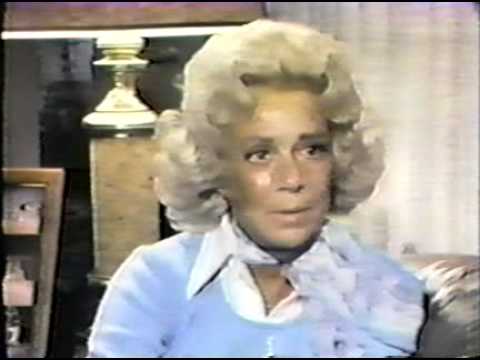 From Satins and Spurs

A ninth grade drop-out, Hutton went back to school and earned a master’s degree in psychology from Salve Regina University, where she would also receive an honorary doctorate. During her time at college, Hutton became friends with singer-songwriter Kristin Hersh. Hersh would later write the song “Elizabeth June” as a tribute to her friend. 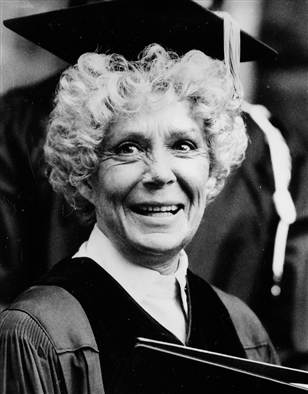 Her last known performance, in any medium, was on Jukebox Saturday Night, which aired on PBS in 1983. Hutton stayed in New England and began teaching comedic acting at Boston’s Emerson College. She became estranged again from her daughters.

After the death of her ally, Father Maguire, Hutton returned to California, moving to Palm Springs in 1999, after decades in New England. Hutton hoped to grow closer with her daughters and grandchildren, as she told Robert Osborne on TCM’s Private Screenings in April 2000, though her children remained distant.

Hutton lived in Palm Springs, California until her death, at 86, from colon cancer complications. Hutton is buried at Desert Memorial Park in Cathedral City, California. None of her three daughters attended the funeral.

Betty’s autobiography, Backstage You Can Have, provides great insight into her life and especially her early years. While not many tributes to Betty remain in her hometown, her link to Michigan was a very important part of her life and her achievements were certainly celebrated in her hometown during her heyday.

According to her autobiography, Betty’s family moved around. At one point they shifted between a home on 184 Lathrop Ave. in Battle Creek, an apartment in Lansing, and another apartment in Detroit. However, Betty was born at 12 Stone Ave at 1:30 a.m., February 26, 1921. This house still stands today and is privately owned. 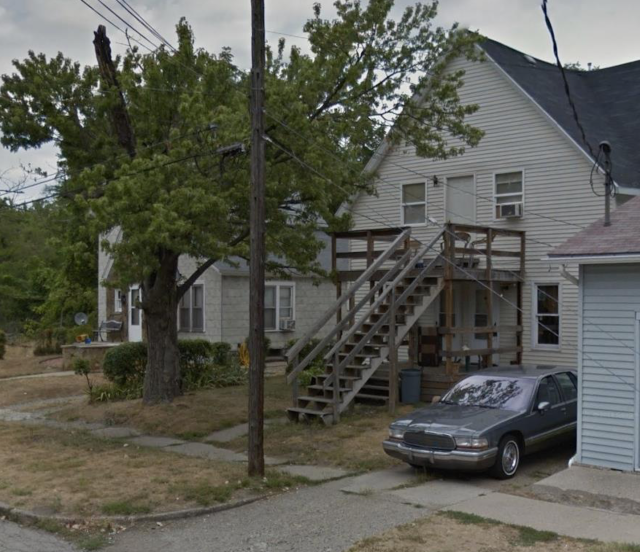 Her family later moved to Lansing. Years later, a plaque was affixed to the home in honor of Betty Hutton having lived there. 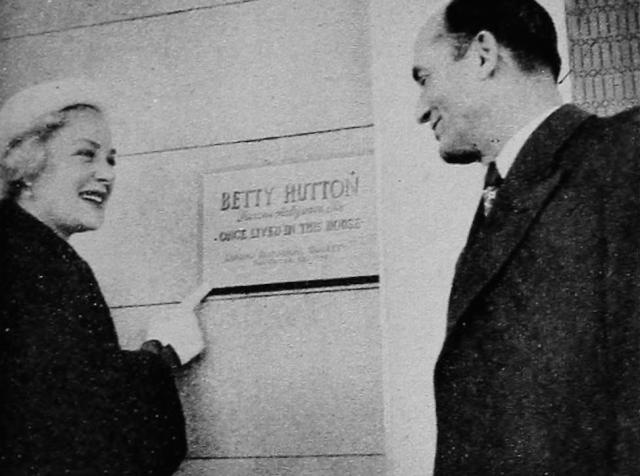 Betty’s visit to her hometown occurred in order to promote the release of the film Let’s Dance, which starred her and Fred Astaire. After an unfavorable childhood in Michigan, Betty and her mother were welcomed home as local celebrities. The mayor immediately greeted them with a kiss and keys to the city. Betty stopped off at Grand Rapids where she was guest of the mayor. She assured him that she’d be campaign manager if he needed one. 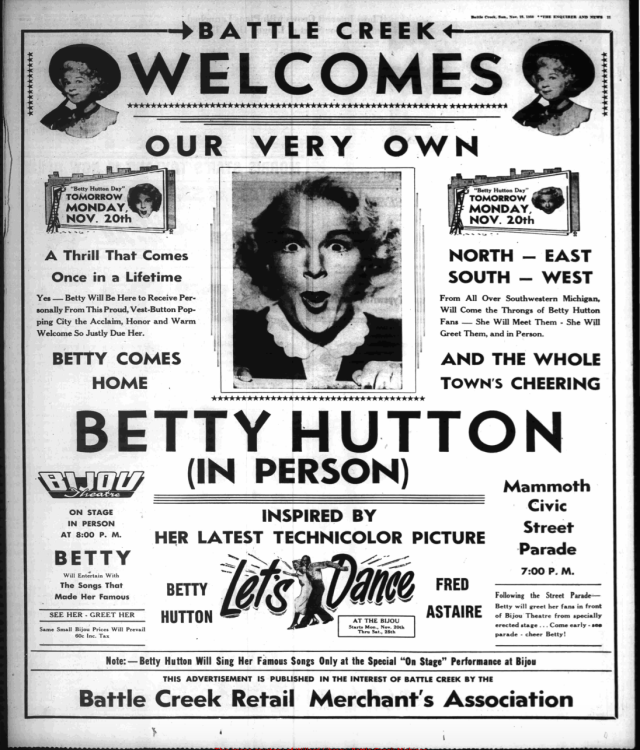 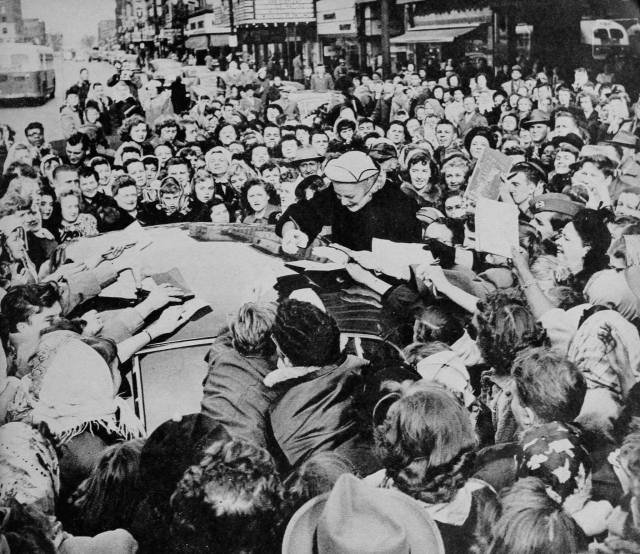 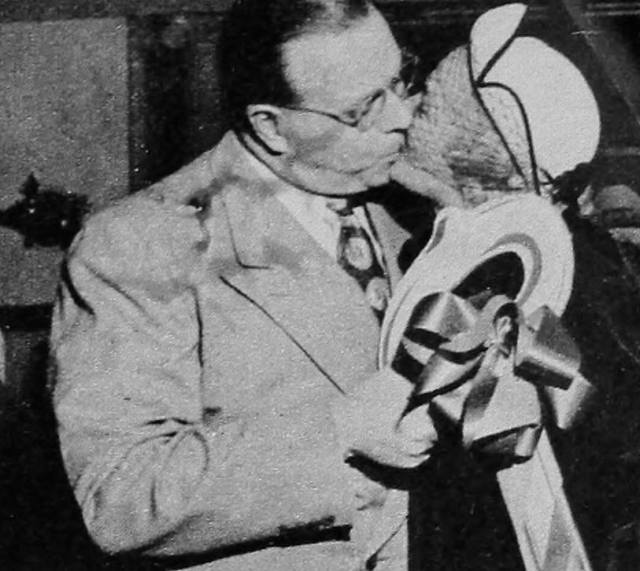 Betty’s “big break” came when she won a contest to play a full week at The Graystone Ballroom in Detroit. The Graystone was closed in 1972 and demolished in 1980. 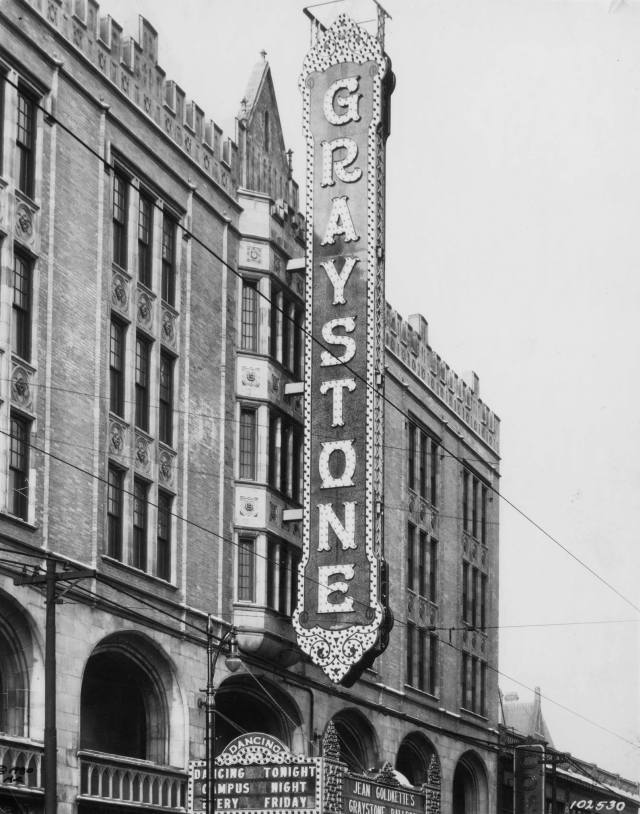 Later, Betty entertained her relatives during the visit home. 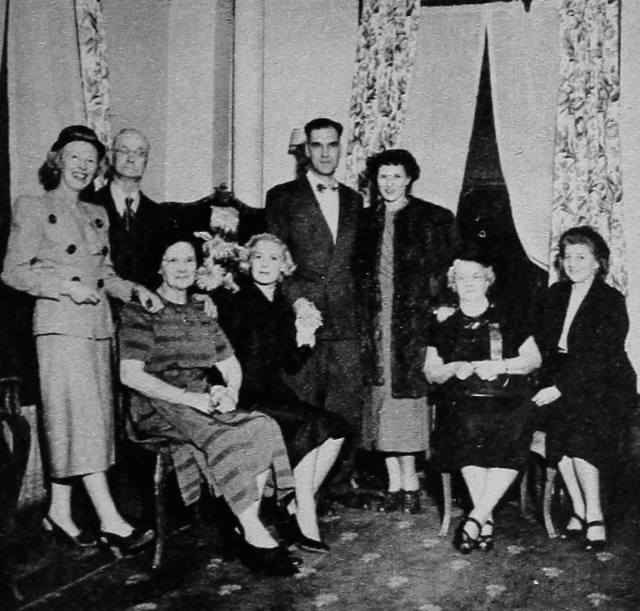 As soon as Betty arrived in Lansing, Governor Williams, his wife and three children called on her. Later, the governor introduced her at a luncheon sponsored by ‘The Red Stocking,’ a local charity organization. 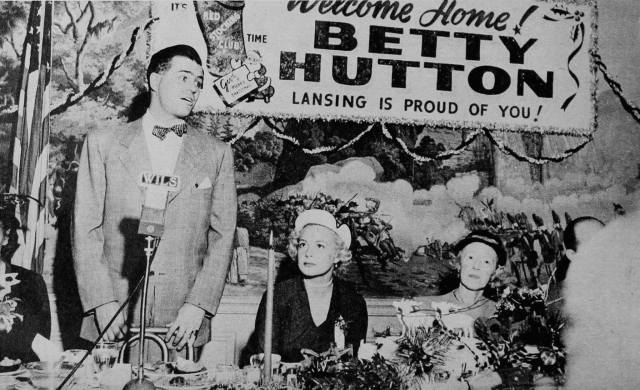 In Lansing, Betty looked up an old dancing friend, discovered that he owned this bar and grill. His wife served her. 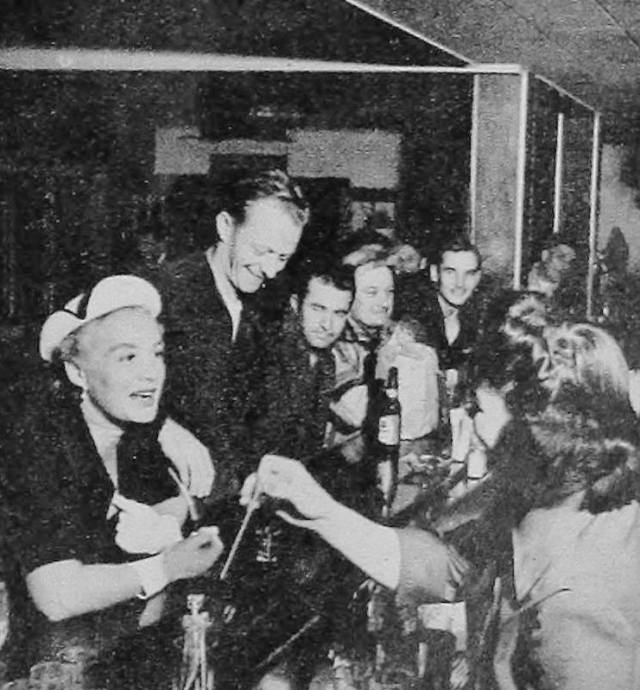 After touring the Chrysler plant with the president of the corporation, where her mother had once worked, Betty and her mother were lunch guests in the executive dining room. Betty sat between L. L. Colbert, the Corp. Pres. and D. A. Wallace, Pres. of the Chrysler Division.

During her hometown visit, Betty attended morning classes at her alma mater, the Foch Intermediate School. She embraced her teacher, and sat at her old desk. For more information about Betty’s hometown visit, go to the Betty Hutton Estate website and read their “Let’s Dance” article.

When Betty Hutton lived in Detroit, she lived across from Foch Intermediate School in a second story apartment. She lived with her mom and older sister, Marion, who was attending Southeastern High School on Vernon Highway.

Foch Intermediate School was at 2962 Fairview St., Detroit, MI, and closed in 2004. Southeastern was next door. 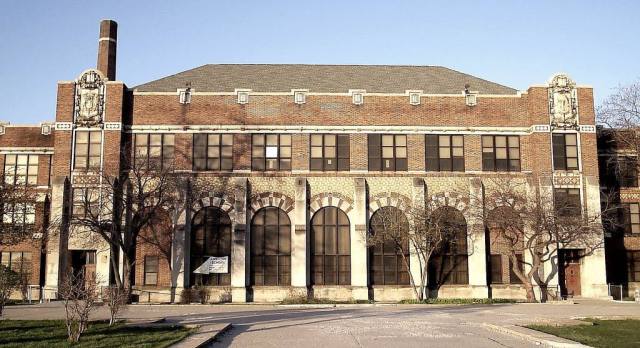 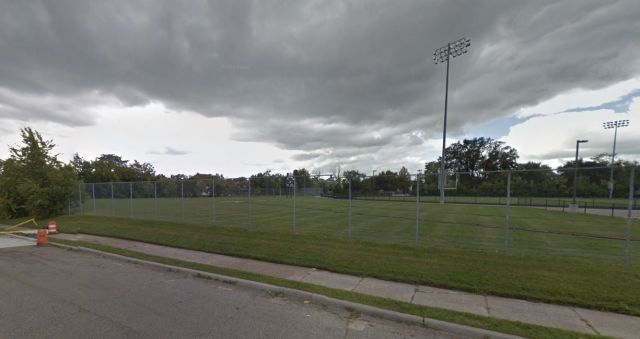 Field across from Foch building, where Betty’s home would have been.

Betty is best remembered for her role as Annie Oakley in Irving Berlin’s Annie Get Your Gun. Like Annie, Betty possessed a deep energy and passion for what she did, but there is a fragility to her life behind the scenes that is seldom seen. A true performer, she masked so much in her enthusiastic performances. Betty’s autobiography offers an excellent means of getting to know her off-screen life and to appreciate her approach to her craft all the more.