“Because I’m a vivid blonde and people think of me as a chorus girl they won’t believe I’m any more than just that.” –Toby Wing

When thinking of some of the top stars of the 30s, Toby Wing’s name does not immediately come to mind. A chorus girl that went unbilled often, Wing was never a big name in the business. However, Wing made her mark quietly in many films and has even warranted a star on Hollywood Boulevard.

Martha Virginia Wing was born in Amelia Court House, Virginia, to Paul Wing and Martha Thraves. She was named after her maternal grandmother and born at Eight Oaks, the plantation of her maternal grandfather, John T. Thraves. Her father was an Army officer, leading her to spend her childhood in Virginia and the Panama Canal’s American Zone. The 1920 census lists the Wings as living in Corozal, U.S. Military Forces, Panama Canal Zone, along with daughters Gertrude and Martha.  According to the 1930 census, he found work as a public school teacher in Virginia. By then, the family had grown, welcoming a son named Paul.

Wing began working onscreen by at age 9. She and her sister, Gertrude (nicknamed “Pat”), dreamed of one day becoming stars. Her father would become an assistant director and a Paramount Studios mid-level manager, prompting Wing to secure small juvenile roles in the Paramount silents that her father was working on. She took the stage name “Toby”, which was a nickname for the family horse, and appeared in uncredited child roles in several silent films. At her parents’ insistence, she left acting to finish her schooling.

There are varying stories regarding how Wing found herself back in the business; one source claims that Jack Oakie introduced her to Samuel Goldwyn at a part, while another claimed she was discovered by Mack Sennett while walking to the Santa Monica Pier with her sister. Nonetheless, she would work for both men and was the last graduate of the studio’s in-house high school in 1933.

By age 16, she became one of the original Goldwyn Girls, billed as “the girl with a face like the morning sun” in Eddie Cantor’s Palmy Days (1931). Busby Berkeley, choreographer for that film, would later hire her for a noticeable but unbilled role in 42nd Street (1933). Though a natural brunette, her hair was dyed platinum blonde. 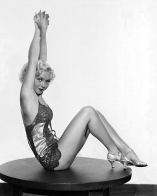 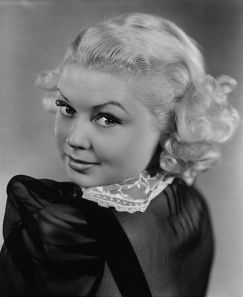 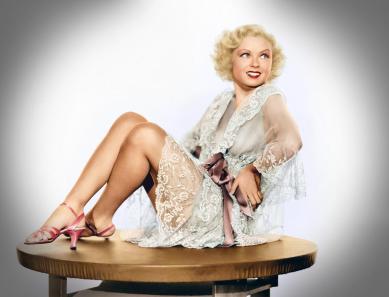 Off-screen, she dated the likes of Maurice Chevalier, Alfred Vanderbilt, Franklin Roosevelt Jr., Jackie Coogan, Pinky Tomlin, and playboy Erskine Eaton. In 1936, her army pilot suitor, John T. Helms, died. This caused her to swear off falling in love with men, vowing that her life would be her career. However, her many engagements would soon be a joke in Hollywood.

In terms of her career, one of her most visible roles was in 42nd Street, in which she was serenaded by Dick Powell during the “Young and Healthy” number. During her heyday she received more fan mail than fellow Paramount Stars Claudette Colbert and Marlene Dietrich. 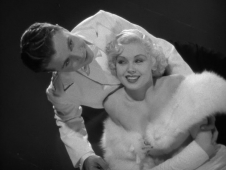 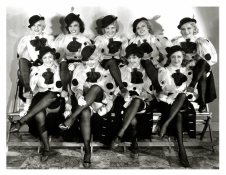 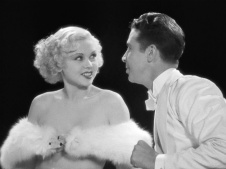 Unfortunately, Wing bounced from being uncredited to credited time and again and never achieved stardom as a lead actress. She can be spotted as a party guest in Torch Singer (1933) and as a girlfriend in Baby Face (1933). Interestingly, Wing had a heroic moment on the set of Come on Marines (1934). Cast member Mary Blackwood nearly did when filming a swimming sequence. Wing was swinging across a lake and accidentally struck Blackwell in the while surfacing from a dive. Spotting her floating in the water, Wing dove into the water and rescued the uncredited extra from drowning. A story and photo describing the event was circulated by the Associated Press. 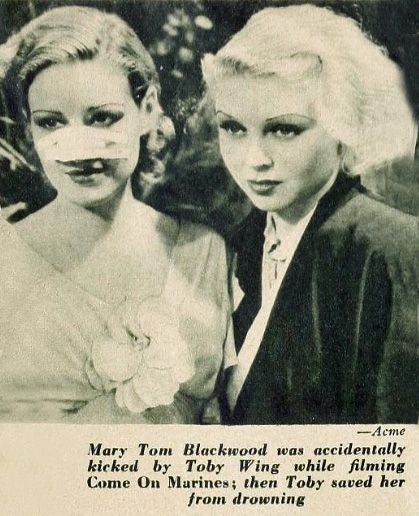 Wing also made a silent appearance in MGM’s promotional short for three-strip Technicolor, La Fiesta de Santa Barbara (1935), which is more famous for the Gumm Sisters’ rendition of “La Cucaracha,” sung by a young Judy Garland.

Wing secured larger parts in poverty row studios, only to find that she had a better press agent than talent agent. From 1933 to 1938, she was one of the most photographed starlets in Hollywood, scoring many endorsement contracts and appearing in many movie magazines. Her personal life also fueled the gossip columns, especially concerning the prominent men who were pursuing her.

Wing’s final leading role was in The Marines Come Thru (1938). Her film career ended where it began—with an uncredited bit role. She closed her film career with an appearance in Sweethearts (1938), starring Nelson Eddy and Jeannette MacDonald. She appeared as a telephone operator in the film. Her acting career as a whole ended on Broadway with Cole Porter’s musical, You Never Know. The musical flopped after 73 performances.

After a brief engagement to Tomlin, she met world-record-setting Eastern Airlines pilot, Dick Merrill, who was the first aviator to fly the Transatlantic route round-trip. After dating for six months, they married in 1938 and remained married for 44 years until his passing in 1982. The married once in Tijuana, Mexico, which upset Wing’s mother, so a second wedding was performed later that year in Virginia. She was happy to retire to their Miami home on Di Lido Island as her husband flew the Miami-NYC Eastern Airlines route. The couple had two sons, though Wing outlived them both. Her first child died of “crib death” in 1940, while their second child suffered a drug-related murder in their Miami home at age 42 in September 1982. Two granddaughters, however, have survived Wing.

Once World War II arrived, Wing’s husband was actively serving. Wing’s father was reactivated for service and captured by the Japanese in the Philippines in 1942. He survived the Bataan Death March and was rescued in the Raid at Cabanatuan by U.S. Army Rangers and Filipino guerillas.

Though Wing was considered retired she toured with Rita Rio’s All Girl Orchestra, along with Marie Wilson and Faith Bacon, across the United States. They made benefit appearances for the Infantile Paralysis Fund and Christmas Seals Tuberculosis campaign during the tour.

Additionally, Wing became involved in civic affairs, even dabbling in real estate in Florida and California. She and her husband were devoutly religions, so Wing taught Sunday school at Miami’s All Saints Episcopal Church well into her 80s. She would also occasionally make the national press when photographed with her husband, who was General Eisenhower’s pilot during his 1952 presidential campaign. The couple appeared frequently at various aviation events.

Upon her husband’s passing, she promoted his legacy as an aviation pioneer and was a devoted grandmother. In the 1980s, she was honored with a star on the Hollywood Walk of Fame. Later, she and her sister, Pat, were interviewed in TCM’s Busby Berkeley: Going Through the Roof (1998). Pat was also a chorus girl who largely worked for Warner Bros., while their brother, Paul, was a billionaire real estate mogul. Wing died from natural causes in her Virginia home in 2001 at age 85, with her sister passing the following year. Paul died in 1998.

Today, few places of relevance remain in relation to Wing’s legacy. In 1930, she was living at 475 Winona (Montana) Ave in Pasadena, California. Winona Avenue used to run all the way south to Orange Grove, but most of it was taken over the 210 Fwy. Here is the property today:

By 1938, she was married and living in Fredericksburg, Virginia. Wing and her husband are buried at Christ Church Kingston Parish Cemetery in Mathews, Virginia. 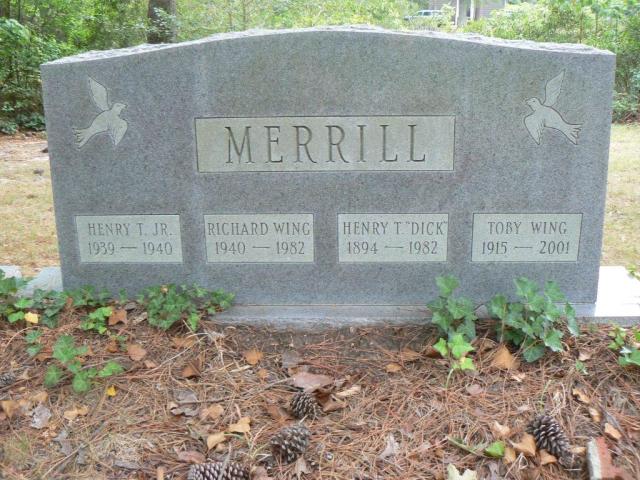