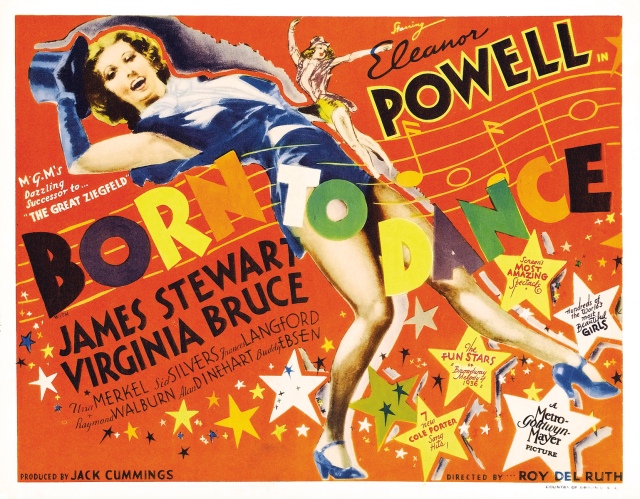 What would the Golden Age of Hollywood be without the musical? When one reflects upon classic cinema, one cannot deny that the movie musical was an especially beloved genre of the time. In their heyday, musicals received profound attention from audiences, who were captivated by a combination of fantastic sets, meticulously choreographed dance numbers, delightful talents of the day, and show-stopping musical numbers. The 1936 musical comedy, Born to Dance, is one such example. Following a lighthearted boy meets girl, boy loses girl, boy gets girl, girl gets show plot, this film is particularly notable for its casting choices and infectious Cole Porter score.

As with any Golden Age film studio, there were talents who solidified their careers by participating frequently in musical films. The mention of a certain actor or actress’ name is simply synonymous with the movie musical. Think of Fred Astaire and Ginger Rogers, or Mickey Rooney and Judy Garland, for example. Some actors appeared to be meant for the musical genre, and performed in film musicals with ease.

Born to Dance stars one of Metro-Goldwyn-Mayer’s most dedicated female dancers—Eleanor Powell. A gifted ballerina-turned-tap-dancer, Powell demonstrated immense potential for musicals, due to her impeccable and almost masculine dancing abilities. While her acting ability was limited, she possessed a commanding presence throughout her dance numbers, while consistently smiling through challenging routines. Prior to Born to Dance, Powell had just made her film debut in George White’s 1935 Scandals, which prompted her to sign a contract with MGM. As a result, her first MGM film was Broadway Melody of 1936, released in 1935. Echoing 1929’s The Broadway Melody, Broadway Melody of 1936 also possessed entertaining musical numbers, steady plot, and charming cast, consisting of Robert Taylor, Jack Benny, Buddy Ebsen, and Ebsen’s sister, Vilma. While Broadway Melody of 1936 possessed detailed Screen Deco sets, the film’s best numbers involve simple routines performed by Powell. 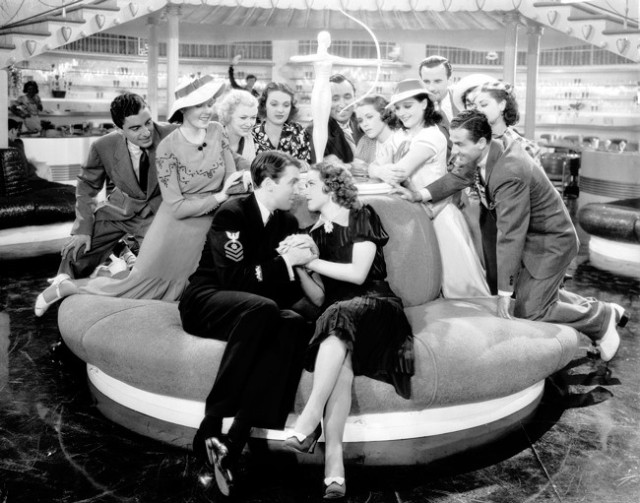 The next year, Powell worked with her Broadway Melody of 1936 director, Roy del Ruth, once more, in order to work on Born to Dance. At the time, the working title of the film was Great Guns. In Born to Dance, Powell stars as a young dancer, Nora, who moves to New York in order to seek fame and fortune on the stage. While she eventually succeeds, she also encounters a romance with a sailor named Ted, who is played by a youthful James Stewart.

While classic cinema has produced several musical stars, one can recall less successful attempts made by actors looking to cross into the musical genre. There are many moments, typically in the early years of an actor’s career, which serve as a type of experimental phase, in order for the film studio to learn how to best market their new talent. James Stewart’s film career was still in its infancy, so the studio tried to cast him in the best possible films for his style, delivery, and appeal. Allan Jones was initially intended for the role of Ted, however, the part went to Stewart. Though Stewart received a lead role in Born to Dance, the studio decided that he was not born to dance, resulting in this film being the only sampling of Stewart’s abilities to sing and dance. Though Stewart struggled with the dancing portions of the film, as well as with a real-life unrequited love for Powell, he was able to recall his days at the glee club in Princeton, and does sing in the film.

In one instance, Stewart serenades Powell with a rendition of “Easy to Love,” which eventually leads Powell into a lyrical dance to the Porter tune. Powell was dubbed by Marjorie Lane for her portion of the song. Porter himself picked Stewart for the male lead, and later said that he sang as well as any professional singer. Porter admitted, “Stewart sings far from well,” but that the actor had “some nice notes in his voice.” Though a dubbing track was prepared with baritone Jack Owens, Porter pushed for the studio to decide that Stewart’s own tenor voice was a perfect fit for the song. With film censorship in full swing, Stewart initially sang the then-controversial lyric of “So sweet to waken with/So nice to sit down to eggs and bacon with.” The lyric had to be replaced with, “So worth the yearning for/So swell to keep every home fire burning for.” In 1974’s That’s Entertainment!, Stewart reminisced, “The song had become a huge hit. Even my singing wouldn’t hurt it.”

As Stewart’s character romances Powell’s, trouble arrives in the form of the temperamental Broadway star named Lucy James, played by Virginia Bruce. Ted meets Lucy in the midst of her publicity tour atop a battleship. Unfortunately, her Pekingese falls overboard, and Ted saves him. Lucy falls in love with Ted, and Ted’s captain orders him to spend time with Lucy, even though he has a date with Nora. After spotting a picture of Ted and Lucy together, Nora distances herself from Ted. Unbeknownst to Nora, Ted has secured her the position of being Lucy’s understudy. A moody Lucy threatens to leave the show if one more piece of publicity is published regarding her and Ted, and Nora is eventually able to step in and open the show for her, similar to Sawyer saving the day in 42nd Street. 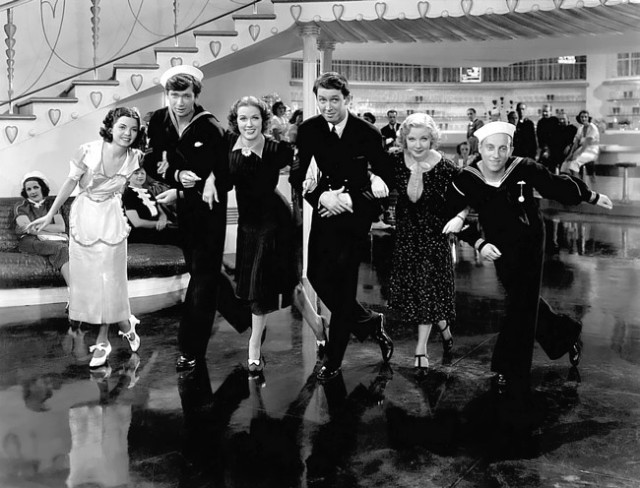 Though Stewart seemed to be an unlikely choice for a male lead in a musical, he and Powell were joined by a talented set of cast members who were not strangers to the movie musical. Frances Langford, Buddy Ebsen, Una Merkel, and Sid Silvers partake in a lively rendition of “Hey, Babe!”, with Langford and Ebsen later reprising “Easy to Love” as a song and dance number. A dreamy Virginia Bruce plays the part of a femme fatale and Powell’s rival, cheekily singing Porter’s double-entendre-filled “Love Me, Love my Pekingese,” and later introducing the song “I’ve Got You Under My Skin,” to an embarrassed Stewart upon an Art Deco rooftop.

The backbone of this film is, however, the dancing of Powell and Ebsen, as well as deliberate and unintended humor. Cowriters Sid Silvers and Buddy De Sylva draw from their vaudevillian backgrounds to provide quips for the films supporting cast. For example, Silvers is asked about his character’s hometown in the following exchange:

“I understand you were born in Brooklyn. Which part?”

Una Merkel plays the part of his quick-to-be bride, marrying Silvers after just meeting him in a marathon dance contest. Merkel retrospectively muses, “I thought I was in love. I was just tired.” After being deemed less than worldly, Silvers joins the Navy shortly after their marriage. In the film, his time in the Navy is coming to an end, and he has just come home to a less-than-thrilled wife. Unbeknownst to him, he also has a small daughter—a secret that is kept from him for the majority of the film.

The film also contains an occasional apathy in regards to reality—a characteristic that many early musicals admittedly exhibit. For one, poor Eleanor Powell is kept waiting in Central Park, alone, until the wee hours of the morning. In another instant, Merkel needs to have a private discussion with Powell, and tells her young daughter to “go along and play.” (Which she does. On the Washington Bridge!) Additionally, the finale provides us with a massive stage and set that could in no way exist and provide decent views for the entirety of its audience.

The finale of the film boasts the influential Screen Deco backdrops of Cedric Gibbons, with scores of dancers parading upon a battleship. Using a nautical motif, the song “Swingin’ the Jinx Away” is amplified in this massive finale number, with Powell confidently taking the stage and proving that her character has succeeded as a dancer in New York. Powell briskly descends upon a staircase, and dances across the Art Deco battle ship. She flips into a standing salute, as the ship’s guns fire directly into the camera. The finale number was created by Roger Edens, a composer and arranger who would later become a crucial member of the Arthur Freed Unit. Years later, he would refer to this number as an “embarrassment of bad taste.”

While Born to Dance possesses a light and sometime saccharine plot, its positive moments by far outweigh any negative critiques. Not yet boasting the full escapism of 1940s style film sets, Born to Dance offers the in-vogue numbers from the witty mind of Cole Porter, amidst full Screen Deco splendor. This film is an ideal example of buoyant and upbeat 1930s musicals, and the perfect teamwork of so many individuals involved in the final product. 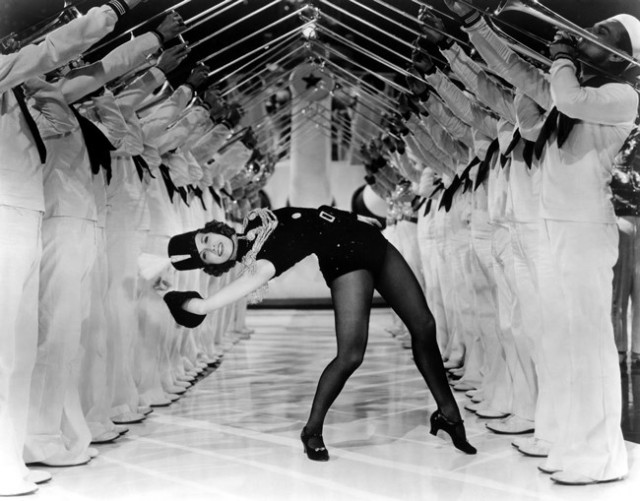 This post is part of the Classic Movie Blog Association’s Spring Blogathon, entitled, “The Fabulous Films of the 30s!” To access more information and read accompanying posts, please click on the following picture: 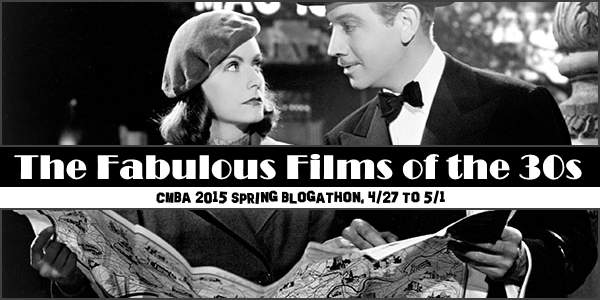 As part of this blogathon’s theme, I recently co-authored an e-book, entitled The Fabulous Films of the 30s. You may purchase your very own edition through Amazon. All proceeds are donated to film preservation. Check it out!