“There’s nothing wrong with Ellen. It’s just that she loves too much.” –Mary Philips as Mrs. Berent

In the striking and often bleak world of film noir, one will find many characteristics that repeat across the genre. While the protagonist–often a pessimistic loner–wrestles with internal and external conflicts during his quest, he is typically met with a femme fatale. Usually an antagonist, the femme fatale dangerously tempts the hero along his journey. She is glamorous and powerful in both her image and strategy. Though many actresses have carried out femme fatale roles, Gene Tierney’s appearance in Leave Her to Heaven (1945) is particularly potent.

Tierney herself was no stranger to the film noir genre. She appeared in such films as The Shanghai Gesture (1941), Laura (1944),  Whirlpool (1949), Night and the City (1950), Where the Sidewalk Ends (1950), and Black Widow (1954). Tierney was revered as a leading lady possessing great beauty and is best remembered for her portrayal as the title character in Laura. However, it would be her performance as Ellen Berent Harland in Leave Her to Heaven that would garner her a nomination for the Academy Award for Best Actress.

The story of Leave Her to Heaven was first told to audiences through a 1944 novel by the same name by Ben Ames Williams. The novel’s title originated from a line in Shakespeare’s Hamlet, in which the Ghost urges Hamlet not to seek revenge against Gertrude, suggesting instead that Hamlet “leave her to heaven, and to those thorns that in her bosom lodge to prick and sting her.”

The story was adapted for the screen by Jo Swerling for distribution by 20th Century-Fox Film Corporation, with John M. Stahl taking on the task of directing, and both William A. Bacher and Darryl F. Zanuck working as producers. The film was shot in Technicolor with cinematography by Leon Shamroy, editing by James B. Clark, and music by Alfred Newman. 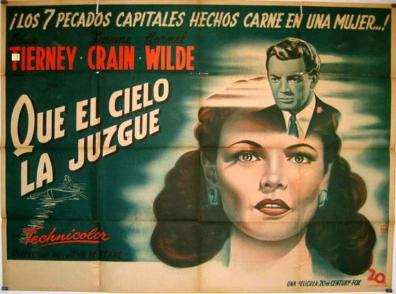 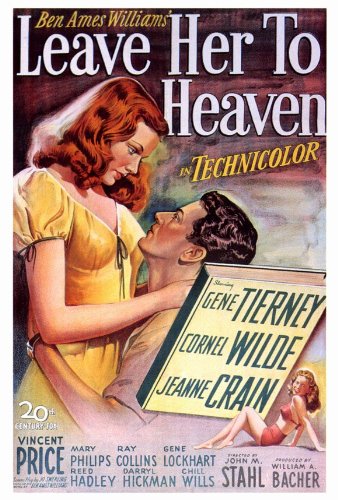 Initially, Rita Hayworth was to portray the role of Ellen but turned it down. Gossip columnists speculated that the studio would instead cast Tallulah Bankhead or Ida Lupino in the film, however it was Tierney who was ultimately placed in the role.

Leave Her to Heaven is depicted as an extended flashback revolving around femme fatale, Ellen. The film version tells the story of novelist Richard Harland coming back to his island home after a prison stay. On his way, he meets socialite Ellen Berent, who falls in love with him because he resembles her recently deceased father. In turn, Richard offers Ellen his sympathy and, later, love. The couple’s romance and relationship are off to a seemingly blissful start, though the relationship becomes increasingly strained as Ellen’s negative characteristics are revealed gradually.

Richard Harland: When I looked at you, exotic words drifted across the mirror of my mind like clouds across the summer sky. 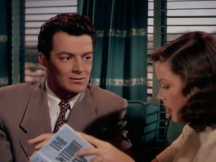 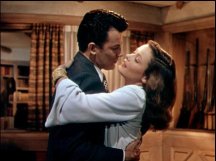 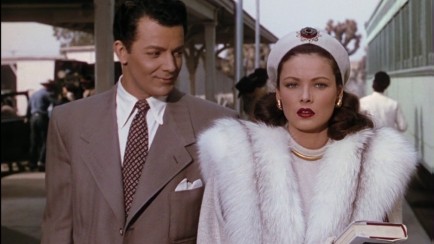 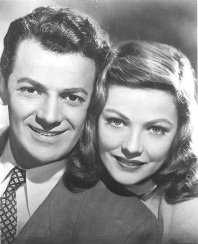 As Ellen was obsessively linked to her father, she similarly latches on to Richard as a replacement for a new source of affection. Previously engaged to Russell Quinton, Ellen is begged by Russell to avoid marring Richard. While Ellen and Richard do marry, Ellen’s flaws become clearer; she is pathologically jealous of anything that distracts her Richard from worshiping her.

Unfortunately for Danny, Richard’s younger disabled brother, Ellen is made aware of how much Richard cares for his sibling. As a result, Ellen views Danny as an obstacle, leading to one of the most jarring, albeit key, moments that reveals the true coldness of her character. Still, Danny is not the only potential diversion for Richard’s love. Frankly, any man, woman, or child capturing Richard’s interest is quickly perceived as a threat by Ellen.

As romance transitions into a nightmarish melodrama, another character is introduced who appears in stark contrast to Ellen’s neurotic possessiveness; joining Ellen and Rich is Ellen’s adoptive sister, Ruth, who serves as her foil. Unlike Ellen, Ruth acts as the wholesome and domestic depiction of a woman, as opposed to Tierney’s ever-calculating femme fatale role. 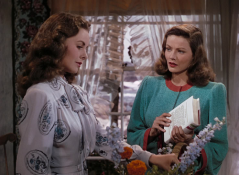 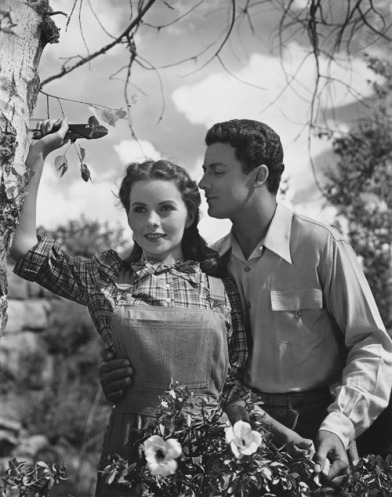 While different characters and events vie for Richard’s attention, Ellen stops at nothing to be at the center of his affection. Over the course of the film, Ellen becomes more conniving and selfish in order to be the constant object of Richard’s affection. Behind her beauty is a wickedness that Richard refuses to acknowledge, even as she commits several crimes that are motivated by her jealousy.

Overall, the film was notable for a number of reasons. In particular, it is an alarmingly subversive film in comparison to some of its peers at the time. While the post-World War II domestic life is typically portrayed happily in many films of the time, this is not the case for Leave Her to Heaven. Rather, the film tackles darker subject matter against the backdrop of domestic life, grappling with jealousy and murder. Instead of the Technicolor camera using vibrant colors to depict vivacity and blissful energy, the camera instead captures the frenzy of a murderous mind behind Ellen’s callous but alluring exterior.

Moreover, the film also portrays an induced miscarriage, offering the first portrayal of an on-screen abortion to be passed under the Production Code. Though other films of the time hinted at abortion, none were quite so blatant as the one executed during Tierney’s portrayal of Ellen. As a result, Tierney’s character delivered an additional shock to audiences of the period. 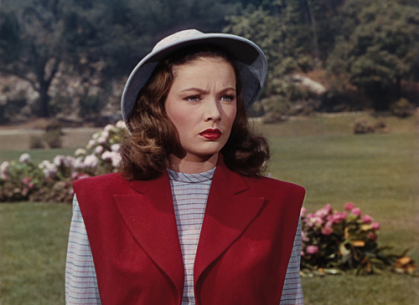 The complicated nature of Tierney’s character is frequently considered to be Tierney’s best performance. From tricking the viewer into accepting her as wholesome in the beginning to betraying the viewer time and again, Tierney masters the multifaceted characteristics of Ellen. In addition to harnessing the demands of the role, the film is also known for capturing Tierney’s beauty especially well in Technicolor, cementing her as a major Hollywood star of the decade. 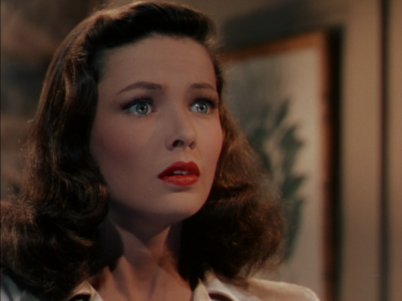 The film was ultimately a box office success, grossing over $5 million and becoming Fox’s highest-grossing film of the 1940s. In total, the film was nominated for four Academy Awards, including Best Actress, Best Cinematography, Best Art Direction, and Best Sound. Though Tierney was nominated for the Academy Award for Leave Her to Heaven, she lost to Joan Crawford and for Crawford’s work in Mildred Pierce (1945). The only category in which the film won was in cinematography, with Leon Shamroy accepting the award for his stunning Technicolor cinematography.

Today, the performances offered by Tierney and her peers hold up especially well. The story remains captivating and dark, with occasional glimmers of hope throughout. Moreover, it is easy to see why this film won an Academy Award in cinematography, as the entire work is photographed beautifully. Nonetheless, though the award-winning cinematography indulges viewers through the twists and turns of the plot, it is Tierney’s performance that leads the way.