“I prayed for an angel of the Lord and the Devil sent me you.” –Victor Mature as Samson

Samson and Delilah (1949) is among the many biblical epics released by Paramount Pictures. Produced and directed by Cecil B. DeMille, the film tells the story of the mighty Samson, who’s strength is connected to his uncut hair. Samson is able to escape many harrowing situations thanks to his strength, coupled by his unwavering faith. All seems to go well for Samson until he is seduced by Delilah, who discovers his secret and betrays him.

The cast of this film is as follows:

The screenplay was written by Jesse L. Lasky, Jr., Fredric M. Frank, and Harold Lamb, with music by Victor Young, and cinematography by George Barnes. Upon its release, the film received praise for its use of Technicolor cinematography, in addition to exceptional lead performances, costumes, sets, and special effects. Of five Academy Award nominations, the film won the awards for Best Art Direction and Best Costume Design. Delilah’s peacock gown and cape, for example, included 2,000 gilded peacock feathers and took 12 women three weeks to finish the costume. 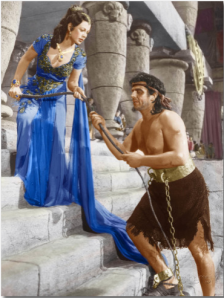 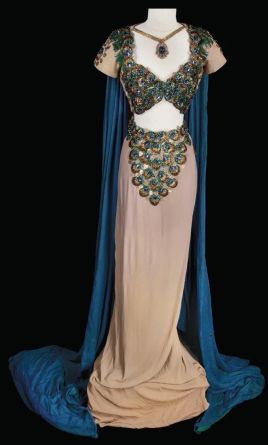 When casting the film, DeMille wanted his ideal Delilah to be a combination of Vivien Leigh, Jean Simmons, and Lana Turner.  His ideal Samson would be a blend of Tarzan, Robin Hood, and Superman. DeMille considered a wide range of actors and actresses for the lead roles, with the top choices being Miriam Hopkins and Henry Wilcoxon. He finally decided upon Lamarr and Mature for the lead roles, with Lamarr appearing in Technicolor for the first time and having 10 costume changes.

In addition to the performances offered by the leads, the film was lauded by special effects that were supervised by Gordon Jennings. His most noteworthy effect was the destruction of the Temple of Dagon, which cost $150,000, and took one year to shoot, as the bottom portion of the temple was constructed full-scale. A 37-foot tall model of Dagon was also necessary to destroy from different camera angles. In total, it took two tries to destroy the Temple of Dagon in a climactic sequence. During the first time, some of the dynamite charges in the miniature temple failed to go off on schedule. The temple had to be rebuilt, and the second attempt was more successful. The footage from both tries can be seen in the film.

Unfortunately, during the temple-destruction sequence, Wilcoxon was struck by a falling column and approached DeMille with blood streaming down his face. According to biographer Charles Higham, DeMille said, “Good God, Harry, you look terrible; you’re going to hold up production.” Wilcoxon replied, “Well, I wouldn’t be the first actor to be destroyed by a column.” 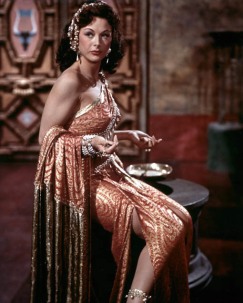 The film was in post-production when Sunset Blvd. (1950) was being shot at Paramount. In a scene where Gloria Swanson‘s character, Norma Desmond, visits a Paramount sound stage to see DeMille, the set of Delilah’s tent was reassembled to show the director working. Wilcoxon, Faye, and other actors in costumes are seen shaking hands with Desmond. 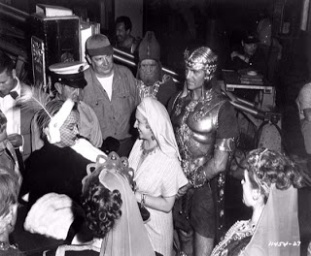 Overall, the film was a massive box office success and the top-grossing film of 1950. In terms of the highest-grossing films of the day, the film was in third place with Gone With the Wind (1939) in first and The Best Years of Our Lives (1946) in second. To this day, Samson and Delilah remains a visual delight.