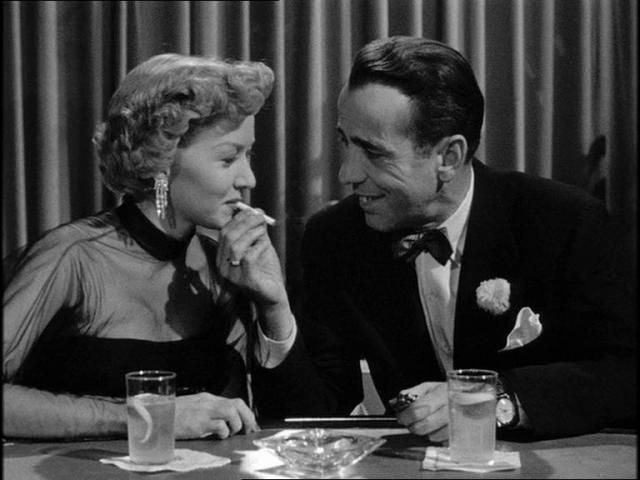 “I was born when I met you. I lived while I loved you. I died when you left me.” –Author Dorothy Hughes, In a Lonely Place

As I have become more acquainted with film noir over the past few years, I have willed myself to try and avoid trusting any of the characters. Though viewers follow the lead actors through the twists and turns of a kinetic plot, there are also high chances of unreliability or sudden revelations that can cause a sense of betrayal or disappointment among viewers. Just as the characters in the story are coping with a world of pessimism, viewers also respond to their world with a poetic blend of shock and dismay. In the case of Dorothy B. Hughes’s 1947 novel, In a Lonely Place, and the Nicholas Ray film adaptation in 1950, Dixon Steele and Laurel Gray experience their own taste of a bitter world.

In a Lonely Place (1950) tells the story of Steele, a screenwriter, who is at a low point in his career and has trouble controlling his temper. A hat check girl named Mildred Atkinson enthusiastically comes home with Steel to explain the plot of her story to him but is mysteriously murdered before she makes it back to her own home. As a result, Steele is a suspect, and his violent outbursts do not work in his favor. Laurel Gray, his neighbor, is brought in for questioning as a witness. Along the way, Steele and Gray fall in love. Even as things begin to look better for Steele, especially to the tune of Hadda Brooks performing “I Hadn’t Anyone Till You”, he continues to act violently and irrationally, causing Gray to lose trust in Steele. 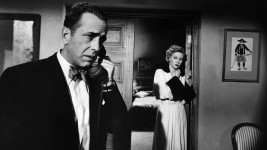 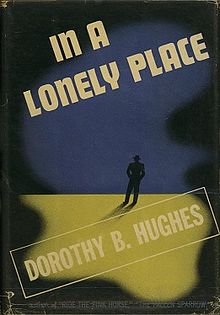 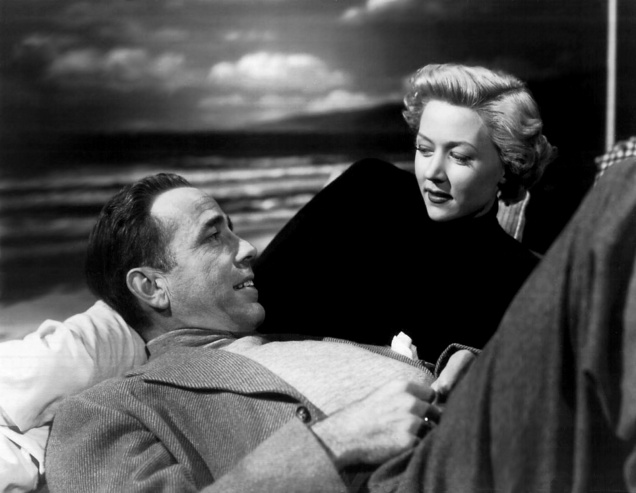 When actress Louise Brooks had transitioned to a career in writing, she discussed the topic of Bogart and his many roles. In her reflection, she felt that Steele was the character closest to Bogart in real life. Interestingly, she also recalled a voyage on Bogart’s Santana yacht during which Bogart executed an outburst that frightened his wife, Lauren Bacall.

While there are deviations from the original novel, particularly in terms of the ending, the film is otherwise quite true to Hughes’s tale. In fact, only four of the 140 pages of script for the film progressed through revisions. Produced by Bogart’s Santana Productions company, the film was scored by avant garde classical composer George Antheil.

Though Bogart was already envisioned in the lead role, the studio considered several actresses for the role of Gray. Among them were Bacall and Ginger Rogers. The latter was actually the producers’ first choice while Warner Bros. refused to loan out Bacall. In the meantime, Ray believed that his wife, Gloria Grahame, would be perfect for the role. Despite the fact that their marriage was already crumbling, her performance is considered exceptional.

In an effort to minimize any potential volatility during the workday, Grahame signed a contract that stipulated “my husband shall be entitled to direct, control, advise, instruct and even command my actions during the hours from 9 AM to 6 PM, every day except Sunday. […] I acknowledge that in every conceivable situation his will and judgment shall be considered superior to mine and shall prevail.” Moreover, she was not allowed to “nag, cajole, tease or in any other feminine fashion seek to distract or influence him.”

In addition, the two worried that they would be replaced from the project should they prevent the progression of filming, so they stayed separate. Ray slept in the dressing room and essentially lived at the studio, claiming he needed to stay late to work, while Grahame cooperated with the facade and went home. Though they reconciled briefly after this, the marriage ended in divorce due a scandalous romantic relationship Grahame had formed with Ray’s son. 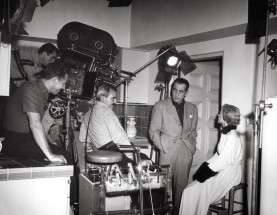 Overall, the film received largely positive reviews, with much credit being attributed to the performances given by Bogart and Grahame. Though the story is bleak in ways that differ from the novel, it is still an iteration of Hughes’s vision on a larger scale that deserves to be seen.