My Uncle, The Scarecrow ,,,
As a child, and to this day, my favorite film is easily The Wizard of Oz (1939). The film was and continues to be both innovative and inspiring, in addition to being packed with some of the finest talents that 1939 had to offer. One of the many talented individuals involved in the project was Ray Bolger, who was cast as the first comrade Dorothy encounters as she traverses the yellow brick road: the Scarecrow.
,,,
Though generations of audiences are introduced to his work time and again through his role as the Scarecrow, his professional career extended far beyond the iconic film. Bolger had strong roots performing on stage as a dancer and worked in a broad range of films that showcased his triple-threat talents.
,,,
When researching Bolger for an article I was writing, I became connected with Christianna Rickard, his niece. Rickard has many fond memories of her uncle and continues to honor his legacy today. Her memories of Bolger are well documented in the 2017 book she wrote, entitled, A Legend in the Straw: The Spirit of My Uncle, Ray Bolger.
,,,
Once in contact with Rickard, I wanted to take some time to learn more about her memories of her uncle and his personality off-camera. My interview with her is published below.
Annette: What inspired you to write A Legend in the Straw: The Spirit of My Uncle, Ray Bolger?
,,,
Christianna: When I got a diagnosis of cancer, I knew I wanted to write something that would give other people strength and courage. Right away, I knew that The Wizard of Oz had all the metaphors I needed–and that my Uncle Ray and his wife, Aunt Gwen, had both lived very successful and healthy lives. I wanted to tell their story, and mine woven into the imagery of Oz. My life was in suspended animation and writing gave me a path forward.
,,,
My aunt and uncle had a very long marriage and they were almost like a second set of parents to me. I knew what strong and disciplined people they had been–and how creative [they were]. They gave me tools–some practical and some internal–to get through cancer and I wanted to share those powerful tools with others.
,,,

Writing the book and telling the story of my family helped me weave things together at a time when they seemed to be unraveling. Writing has always served this function for me. Over the years, I always wrote letters to my aunt and uncle and Uncle Ray told me,  “You write like a son of a gun!” I took that as a great compliment. I wanted to capture their remarkable love story in my book and to show what can be accomplished when people work well together. 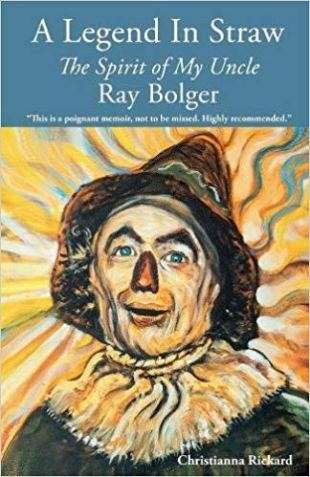 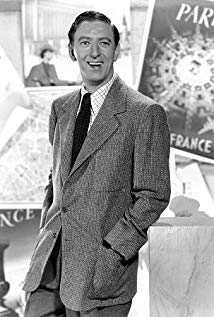 Annette: As you gathered information for your book, did anything surprise or shock you along the way as you were working on your book?

Christianna: Not really. I’d known my aunt and uncle all my life and my mother performed on Broadway with Uncle Ray in Where’s Charley?, so our family was show business-oriented. We were a close family and most of what I wanted to say came pretty easily.,,,
,,,
When my aunt and uncle died, we had to go through their home and remove everything. I was interested in old theater reviews and clippings of my uncle’s career, so I used those for background material. He was a big star on Broadway–much bigger than people may realize. I loved reading those papers and imagining the high times they had in New York. My uncle was just who he appeared to be.
,,,
Annette: What is your favorite memory of your uncle?
,,,
Christianna: There is no one memory. I remember all our family dinners, swimming at his house, Christmas dinners–the usual things you do with your uncle–except my uncle was always in motion and full of high energy! I remember the deli lunches he’d have delivered to his house when we were swimming, playing the piano in his studio out behind the tennis court, [and] going to see him when he did local shows like Johnny Carson and The Hollywood Palace. Thanksgivings were at Uncle Ray’s country club and the buffet was definitely memorable. I went to a formal celebrity tribute in Houston with him and that was a great experience. Afterward, in his hotel room, he jumped on the bed just for fun and to loosen up!
,,,
I remember everything–having lunch on Wednesdays with him and my aunt when they were older, seeing him when he got sick–he wasn’t ready to go; he wanted to live forever.  One thing I missed out on was that he did the eulogy at my Dad’s funeral and it was wonderful. My dad had two services and I could only attend the one in Texas. Uncle  Ray, my dad, and his two brothers were all great friends for many years. They were more like brothers than brothers in law. Uncle Ray was the head of our family, so he’s tied to my entire childhood.
,,,,,,
Annette: Aside from his iconic role in The Wizard of Oz (1939), what are some of your favorite roles or on-screen moments in which your uncle was featured?
,,,
Christianna: I recently watched the 1949 film, Sunny, and enjoyed it immensely. Every year, there are more YouTube clips of Uncle Ray dancing and this is great to see.
,,,
As kids, we saw him in Babes in Toyland. It wasn’t a great movie but we got to go to the wrap party at Walt Disney’s ranch in California. For us, that was exciting.
,,,
Uncle Ray won a Tony Award for Best Actor in a Musical Comedy for his work in Where’s Charley? on Broadway. It was a real family affair with my aunt producing the show and my mom singing in the chorus. His performance of “Once in Love with Amy” was the show-stopper and by all accounts it was a great moment in the theatre. I would love to have seen it. I’ve seen the film version but it can’t be compared with the stage show. Recently, I enjoyed watching his old Password shows just for the connection of seeing him as I knew him. He was so funny and expressive and actually a very good player. He made quite a few movies–I’m just now seeing them for the first time.
,,, 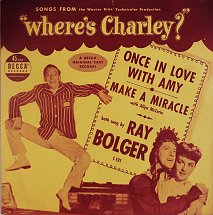 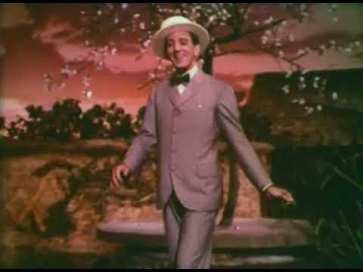 Annette: Did your uncle have any performers with whom he especially enjoyed working?
,,,
Christianna: I wouldn’t want to answer this because I know there were countless people he worked with over the years. He really enjoyed people, generally–his fellow vaudevillians, young people, talented directors and choreographers. He lived for entertaining people and knew many great people. He loved Judy Garland and they had a close bond.. All the Oz players were his contemporaries and, despite the hardship of making the film, they had good times together. He loved working with George Balanchine, the famous choreographer but he and my aunt traveled the world and knew so many people in so many aspects of show business. My mom always said Uncle Ray was amazing to work with on Broadway and that he treated the entire cast like family.
,,,
Annette: How would you describe your uncle’s legacy today?
,,,
Christianna: His legacy as the Scarecrow is clearly as a lovable, timeless friend. That role, that image of him, will always be the most significant in terms of public recognition–and I think he was happy with that. But, for me, his real legacy is his dancing, his movement and his great love for performing. He studied people and was a great mimic. He really wanted to give his all in every performance, and was very disciplined and dedicated to his craft. At the end of his life, he and my aunt funded a Musical Comedy program at UCLA. He wanted to see young people schooled in the great traditions he had learned. His heart and soul were in the theatre with a live audience, doing everything he could to entertain people and make them happy. He clowned around a lot but was also a serious man with a very clear intention for his life.
,,,
I hope his legacy will include the breadth of his abilities and his passion for work. He exercised and rehearsed until the day his hip gave out in his 70s. He was completely immersed in movement and dance.
,,\ 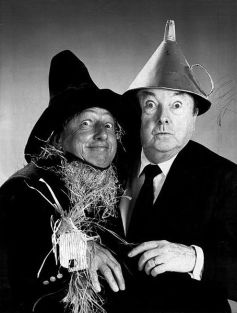 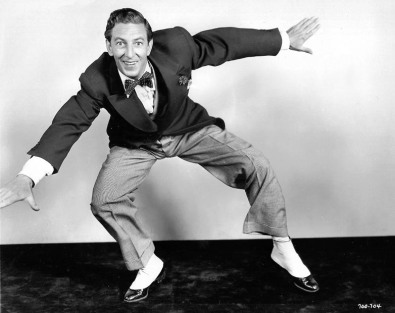 Annette: How can we best preserve the legacy of Ray Bolger today?
,,,
Christianna: As I said, I’m thrilled to see so many YouTube performances turning up on the internet. Watching his dancing tells you a lot about him. He was versatile, funny and subtle.
,,,
He has a big place in people’s hearts as the Scarecrow. He is loved for that role and I think that’s a great legacy–the kindness he portrayed, the cleverness, and loyalty. When asked if he got residuals for The Wizard of Oz, he replied, “No residuals–just immortality!” And I think that’s true. His costume is at the Smithsonian.
,,,
People can read my book for more insight into his personal thoughts and ideas. I wrote about the things he taught me and I hope those will be remembered.

Bolger’s Scarecrow costume resides at the Smithsonian Museum of American History, though the costume in full has seldom been removed from storage. Currently, there are efforts being made to help conserve the 80-year-old piece.

Presently, the hat from the costume is on display behind glass, along with Glinda’s wand. The hat and wand are located in the same room as one set of Dorothy’s ruby slippers. While the slippers exist in multiple pairs in various locations, the Scarecrow’s hat exists only at the Smithsonian. I was fortunate to visit these iconic pieces in July 2019. If you are a fan of Bolger, this iconic piece is not to be missed–as is the heartfelt book that Rickard has published in his honor. 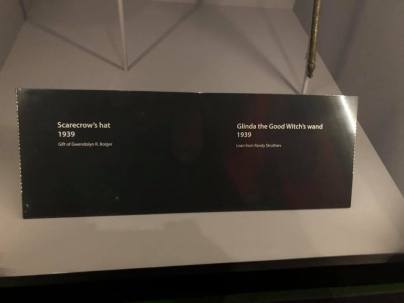 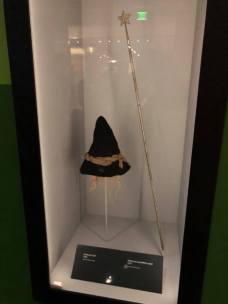 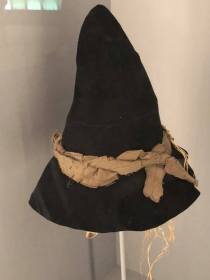 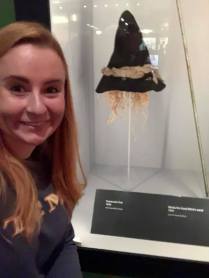 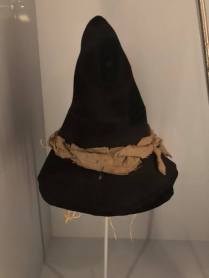 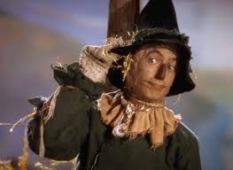 4 Responses to My Uncle, The Scarecrow