Posted on September 6, 2019 by Annette Bochenek

When I think of shorts that are classic comedy gold, The Music Box (1932) quickly comes to mind. A key work from the creative minds of Stan Laurel and Oliver Hardy, this Sisyphan tale of the duo trying to deliver a piano up a seemingly endless flight of stairs never fails to disappoint. As the two work to deliver the piano and overcome their own hilarious ineptitudes, they meet quite the humorous cast of characters on their frequent trips up and down–and up and down–the stairs.

The short stars Laurel and Hardy but also has a roster of uncredited characters, including:

The short was directed by James Parrot, produced by Hal Roach, and written by H.M. Walker. Gilbert claimed he was originally supposed to direct the short but was so convincing in demonstrating how The Professor should be played that he was reassigned to the role instead. Harry Graham, Marvin Hatley, and Leroy Shield, while the short was distributed by Metro-Goldwyn-Mayer.

The Music Box is partly a remake of an earlier silent short starring Laurel and Hardy called Hats Off (1927), which was filmed at in the same vicinity as The Music Box but is now considered to be a lost film. In Hats Off, Laurel and Hardy work to deliver a washing machine up a flight of stairs. For The Music Box, the object being carried was changed because a piano was both heavy and large but also delicate.

While shooting for the short took less than two weeks, it did pose some challenges and changes. Unlike the usual practice on most Laurel and Hardy films, this short was not shot in sequence, largely due to changing cloud conditions that made it necessary to wait for the right sun to match the lighting from one shot to the next. A special police squad was on duty at the Vendome Street staircase, where the short was being filmed, over the course of the four-day location shoot to keep more than 3,500 onlookers and fans from interfering with the production. During lunch breaks, Laurel and Hardy reportedly signed about 2,000 autographs.

The crate that Laurel and Hardy maneuver was empty, but the one shown sliding down the staircase really did have an upright piano in it. As it flies down the steps, chaotic and dissonant tones can be heard. During filming, Hatley was just off-camera playing the piano to simulate the player piano sounds in the scene when the duo is cleaning up the house and dancing. When Gilbert begins smashing the piano with an axe, Hatley played along off screen, matching the axe hits.

Overall, the short was well received by audiences and critics. The short won the Oscar as Best Short Subject of 1932, making it the only honor bestowed on a Laurel and Hardy film. It was also the first short to receive this honor. 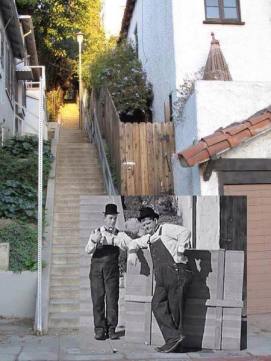 Today, the iconic staircase in the film still exists in the Silver Lake district of Los Angeles, between 923 and 935 Vendome Street. There are 131 steps and the area is marked by a plaque and honorary street sign. 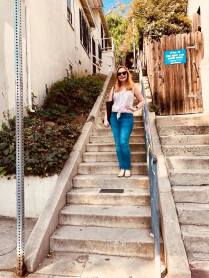 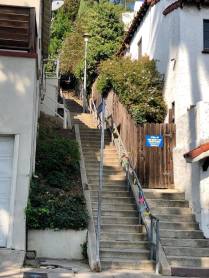 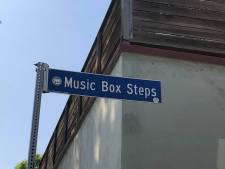 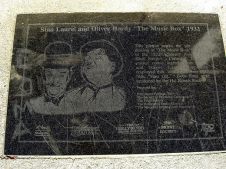 When I visited, I ran into a local photographer named Gary who offered to take my picture. What luck! I also learned that just a few days prior to my visit, the Silverlake Chamber of Commerce hosted its annual Music Box Day, which includes food, festivities, and even some fun with Laurel and Hardy impersonators. Gary was kind enough to share the photos from the 2018 Music Box Day celebration with me. 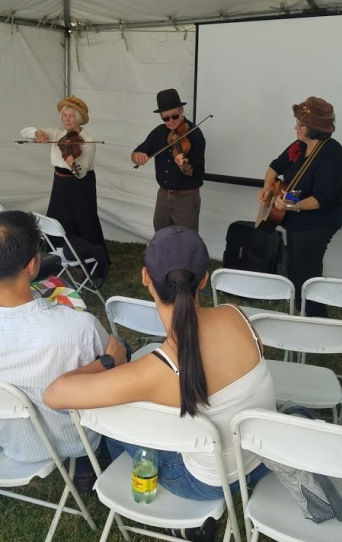 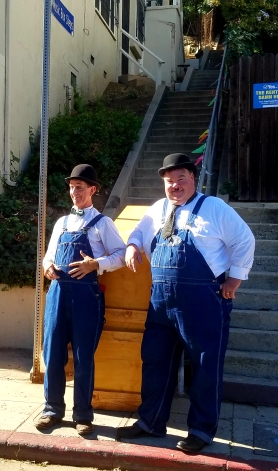 If you are a Laurel and Hardy fan, this is a crucial pilgrimage to make and one that is easy to manage. Plus, your visit will likely be a lot less stressful than Laurel and Hardy’s!