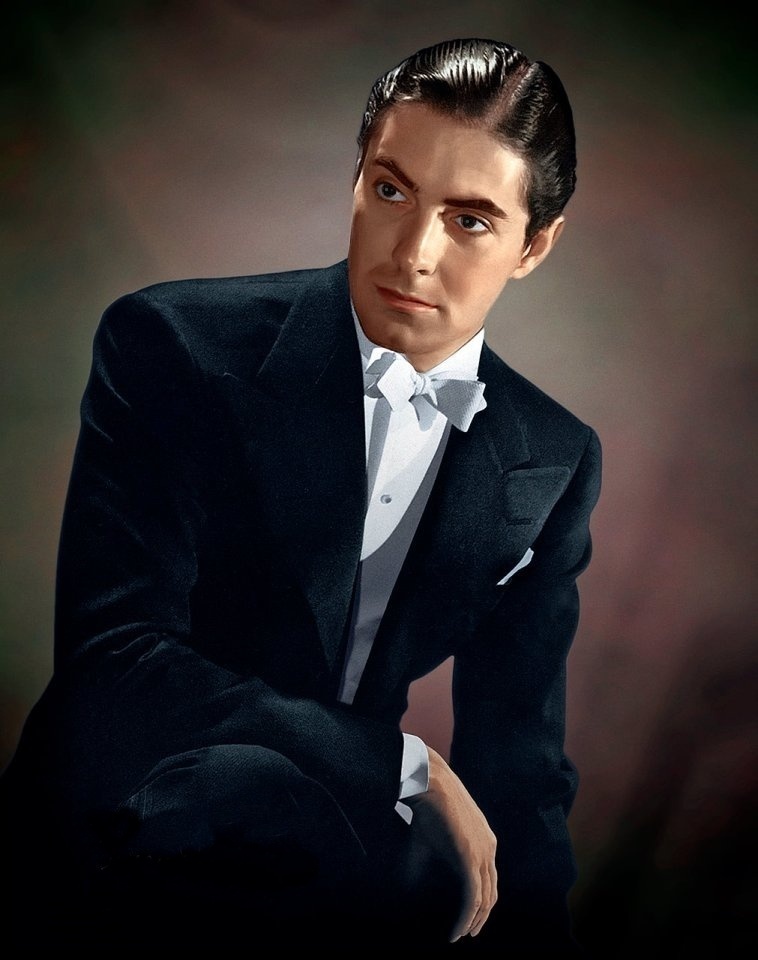 “The secret of charm is bullshit.” -Tyrone Power

For this particular entry, I’d like you to look back upon some of the most memorable romantic greats of classic film. Sure, there was Gable and his wry wit, Grant, the constant gentleman, and even Valentino’s passionate sheik, long before. Yet, as phenomenal as each of these actors were in their own right, there is something about the vivacious mystique of Tyrone Power that is just not emulated elsewhere. His screen persona possesses a charisma that stands apart from the other classic idols. While Power may fondly refer to this charm as “bullshit,” I think his ability to call Hollywood out on its superficiality is all the more reason to celebrate him as his own brand of acting genius. There is more than meets the eye in terms of Power’s passion and talent.

Known worldwide as a romantic icon, Power hailed from the midwest and paved his own way into Hollywood. Though he descended from a long line of actors, dating all the way back to his great-grandfather, he took on a series of odd jobs before achieving his own fame. This particular exploration of Power’s roots involved more sleuthing than usual, as Cincinnati is essentially a town Power left behind. In advance, I’d like to thank Colleen Phillips of the Cincinnati Public Library for her assistance in my research. 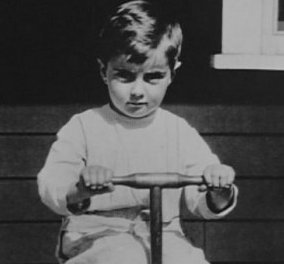 Power was born in Cincinnati on May 5, 1914. Tyrone, his mother, and sister, returned to Cincinnati and were living at 2536 Kemper Lane in the Walnut Hills neighborhood, according to the 1930 census and city directory. This was the location of the Schuster-Martin School of Drama, which was run by Tyrone’s great uncle, William Martin. The school used to be situated across the street from where the Cincinnati LIbrary’s Walnut Hills Branch is located. Interestingly, Cincinnati is also the hometown of Doris Day, who took voice lessons at the Schuster-Martin School.

Unfortunately, the Schuster-Martin School no longer exists. A parking lot is now in its place. 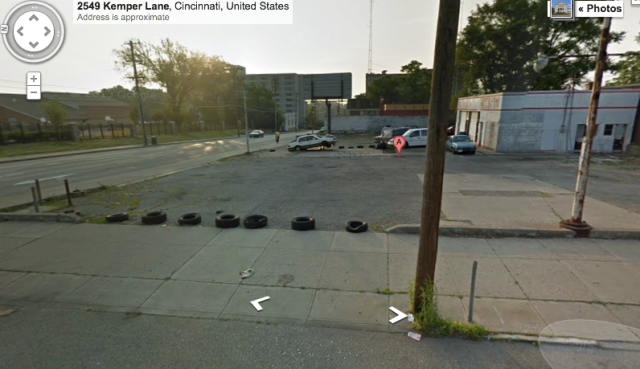 A few blocks away, however, you can visit the former location of The Paramount Theater, in which Power worked as an usher on evenings and weekends as a teenager.

Though the building still stands, the venue is no longer operating as a theater. The theater section has since been demolished, and the building is largely used as a space for offices.

Tyrone spent his initial high school year in a Jesuit school in downtown Cincinnati, forever remembering a Father Flynn as a positive influence on his life. Tyrone later went to school at St. Mary’s, a Jesuit institution which would later become part of the University of Dayton. While at home for the summer, Power worked at the Walnut Hills Orpheum as an usher once more.

By this time, Power’s mother had instilled a great love for Shakespeare, classic literature, and the performing arts in her son. While working as an usher, Power’s interest in films and acting grew. According to author Fred Lawrence Guiles, Power maintained a notebook, in which he reviewed each film he encountered while working. Since he was faced with seeing films repeatedly, he would write about the plot structure and carefully critique the performances he saw.

Eventually, Power grew tired of the boarding school experience, noting that his family was not well-off and that he wasn’t as appropriately dressed for school as his classmates. Instead, Power opted for a high school education at Purcell High School for boys, where Tyrone developed a deeper interest in drama–almost to the exclusion of everything else. His friends at Purcell were the first to support him in his career choice of becoming an actor, believing that he would be able to survive easily as an entertainer. His yearbook caption addresses him by his nickname, “Ty,” and lists him as a participant in Dramatics, Senior Treasurer, German Club Member, and Basketball Player. His description reads the following:

“Ty” came to Purcell from Dayton Prep, and in a short time became a favorite with the students and teachers alike. “Ty” is a good student, but his acting makes him the logical successor of John Barrymore.

Power graduated in 1931, and never lost touch with his Purcell friends. 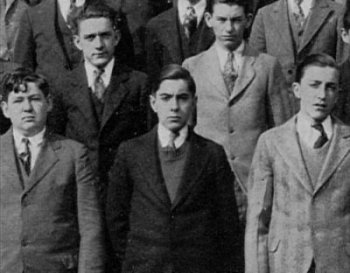 Purcell Marian High School is still in operation today. However, it has since gone co-ed in its educational approach.

After graduation, Power left home for Chicago, eventually landing a job reading comic broadcasts on the radio on Sunday mornings. Here, he depended upon his voice in order to sustain himself, and not just his looks. He still sought supplementary jobs, even working the 1933 Chicago World’s Fair with the task of pushing people around in rolling wicker chairs.

Luckily, these jobs were short-lived, and Power finally made his way to Hollywood, eventually partaking in a wide range of film genres. Power appeared in lighthearted musicals and grew to be a major romantic lead, but always fought for stronger roles with more substance than just looks alone.

I have been fortunate enough to chat with Power’s daughter, Taryn Power-Greendeer, from his marriage to actress Linda Christian. A wealth of information about her father’s legacy, and an overall class-act, Taryn spoke to me regarding her father’s greatest interests in life.

“Aside from women,” she mused, “my father’s greatest interests were acting, flying, and books.” Power held a deep reverence for the art of acting, but of course maintained interests beyond his choice of career. Due to the war, Power enlisted in the Marine Corps as a pilot, eventually being promoted to first lieutenant. Additionally, Power was an avid reader, collecting a vast amount of first edition texts.

The acting legacy continues in Power’s family, as Taryn worked as an actress for some time. Taryn’s daughter, Valentina, also continues to act, largely in musical theater. Power’s descendants do a wonderful job of preserving his legacy, and I applaud them for it.

Valentina, Taryn, and myself

Even if you are not expressly a Power fan, Cincinnati is a beautiful town. When I drove there with one of my Butler University friends, Maddie, (rather, she drove me!) I couldn’t help but notice how lush and green everything was. That, and the fact that there were hills! We were pretty used to the flat land all around us in Indianapolis. But Cincinnati itself is extremely picturesque. 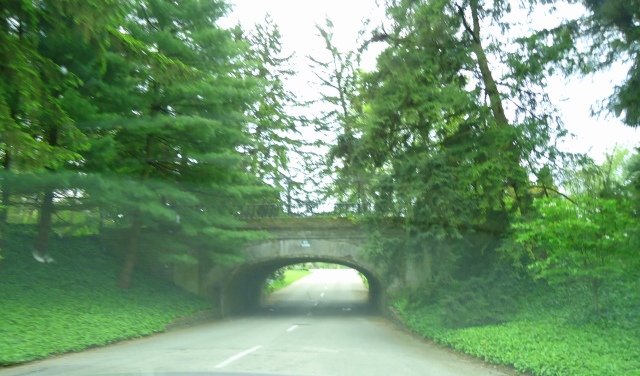 If you have time to spare, I highly recommend a stop to Spring Grove Cemetery in Cincinnati. It’s huge, historic, and full of captivating art and scenery. If you check their calendar, you may even be able to catch a guided tour, complete with actors in period costume.

Also, if you’re as much of a film buff as I am, Peg Entwistle (the actress who jumped off the Hollywood sign) is buried in nearby Oak Hill Cemetery, which is part of the Spring Grove family. 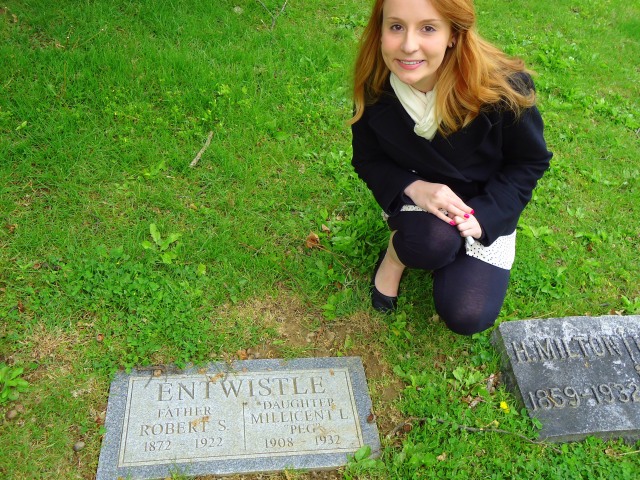 Be sure to stroll down Ludlow Avenue and catch a great Indie flick at the Esquire Theatre!

To learn more about Tyrone Power and access some amazing archives, please visit the Cincinnati Public Library. They’re genealogical department is superb! And since it was so tricky to find places in Cincinnati that were pertinent to Power’s life, I invite you to share any information you’d like to share, especially if you’re a Cincinnati local. 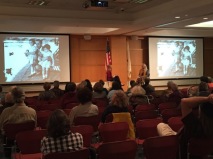 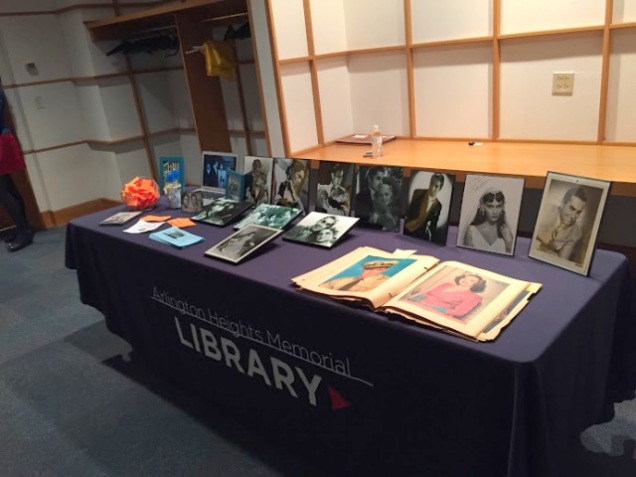