Posted on September 1, 2019 by Annette Bochenek

During my first trip to Los Angeles, I made it a priority to visit Westwood Village Memorial Park. This small location tucked away behind several buildings is the resting place of some of the entertainment industry’s greatest names. Moreover, it has a high amount of celebrity burials and interments in the small space it occupies, making it a place that is fairy easy for respectful fans to visit and to take some time to remember their favorite stars. Today, the cemetery is still active and hosts many high-profile services in addition to anniversary memorial services in honor of the individuals at rest there.

Rodney Dangerfield
(November 22, 1921 – October 5, 2004)
Born Jacob Rodney Cohen, popularly known by the stage name Rodney Dangerfield, was an American stand-up comedian, actor, voice artist, producer, screenwriter, musician and author. He was known for his self-deprecating one-liners humor, his catchphrase “I get no respect!” and his monologues on that theme.

Merv Griffin
(July 6, 1925 – August 12, 2007)
Born Mervyn Edward Griffin Jr. An American television host and media mogul. He began his career as a radio and big band singer who went on to appear in film and on Broadway. From 1965 to 1986, Griffin hosted his own talk show, The Merv Griffin Show. He also created the internationally popular game shows Jeopardy! and Wheel of Fortune through his television production companies, Merv Griffin Enterprises and Merv Griffin Entertainment. 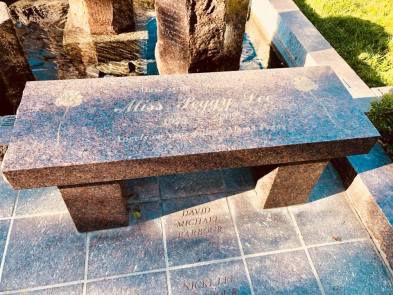 Peggy Lee
(May 26, 1920 – January 21, 2002)
Born Norma Deloris Egstrom, known professionally as Peggy Lee. An American jazz and popular music singer, songwriter, composer, and actress, in a career spanning six decades. From her beginning as a vocalist on local radio to singing with Benny Goodman’s big band, she forged a sophisticated persona, evolving into a multi-faceted artist and performer. During her career, she wrote music for films, acted, and recorded conceptual record albums that combined poetry and music.

Fanny Brice
(October 29, 1891 – May 29, 1951)
Born Fania Borach, known professionally as Fanny Brice or Fannie Brice. An American illustrated song model, comedienne, singer, theater, and film actress who made many stage, radio, and film appearances. She is known as the creator and star of the top-rated radio comedy series The Baby Snooks Show. Thirteen years after her death, Brice was portrayed on the Broadway stage by Barbra Streisand in the 1964 musical Funny Girl; Streisand also starred in its 1968 film adaptation, for which she won an Oscar. 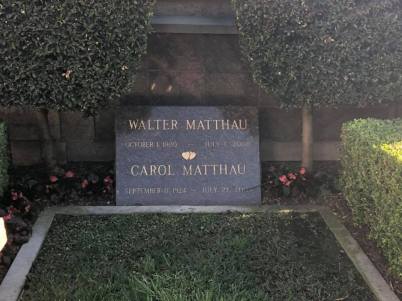 Walter Matthau
(October 1, 1920 – July 1, 2000)
Born Walter John Matthow. An American actor and comedian. He is best known for his film roles opposite Jack Lemmon, playing Oscar Madison in The Odd Couple, (1968) and its 1998 sequel, The Odd Couple II, and Max Goldman in Grumpy Old Men (1993) and its sequel, Grumpier Old Men (1995). Matthau also appeared opposite Audrey Hepburn in Charade (1963), and won the Academy Award for Best Supporting Actor for his performance in the 1966 Billy Wilder film The Fortune Cookie. Besides the Oscar, he was the winner of BAFTA, Golden Globe and Tony awards. On Broadway, Matthau further portrayed Oscar Madison in The Odd Couple play by playwright Neil Simon. 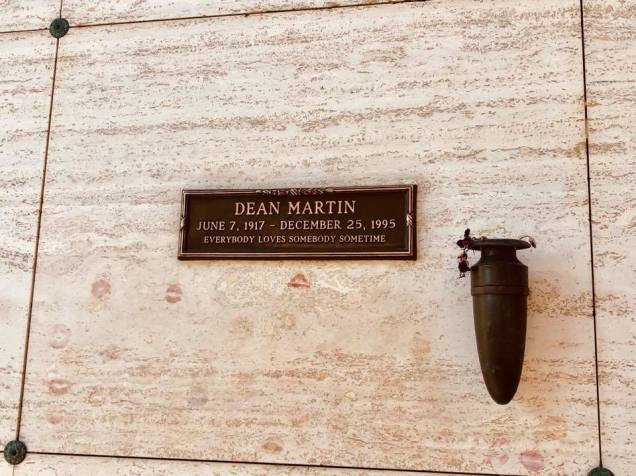 Dean Martin
(June 7, 1917 – December 25, 1995)
Born Dino Paul Crocetti, known famously as Dean Martin. An American singer, actor and comedian. One of the most popular and enduring American entertainers of the mid-20th century, Martin was nicknamed “The King of Cool” for his seemingly effortless charisma and self-assurance. 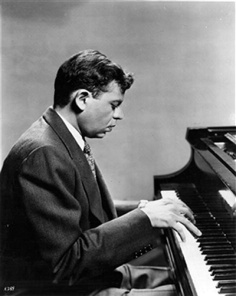 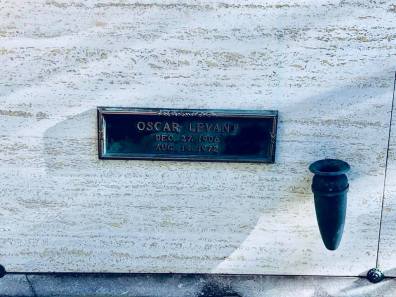 Oscar Levant
(December 27, 1906 – August 14, 1972)
An American concert pianist, composer, music conductor, bestselling author, radio game show panelist and personality, television talk show host, and actor. He was as famous for his mordant character and witticisms, on the radio and in movies and television, as for his music. 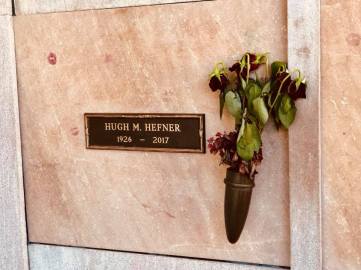 Hugh Hefner
(April 9, 1926 – September 27, 2017)
Born Hugh Marston Hefner. An American magazine publisher, the founder and editor-in-chief of Playboy magazine, a publication with revealing photographs and articles which provoked charges of obscenity. The first issue of Playboy was published in 1953 featuring Marilyn Monroe in a nude calendar shoot; it sold over 50,000 copies. 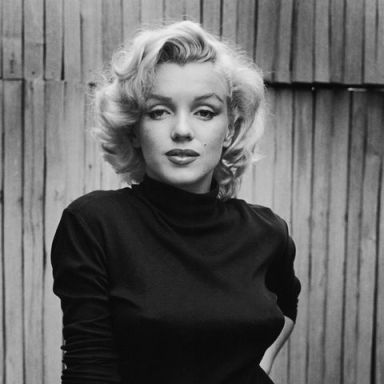 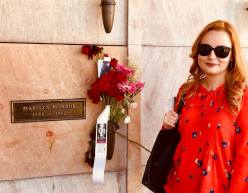 Marilyn Monroe
(June 1, 1926 – August 4, 1962)
Born Norma Jeane Mortenson. An American actress, model, and singer. Famous for playing comic “blonde bombshell” characters, she became one of the most popular sex symbols of the 1950s and early 1960s and was emblematic of the era’s changing attitudes towards sexuality. Although she was a top-billed actress for only a decade, her films grossed $200 million (equivalent to $2 billion in 2018) by the time of her unexpected death in 1962. More than half a century later, she continues to be a major popular culture icon.

Mel Tormé
(September 13, 1925–June 5, 1999)
Born Melvin Howard Tormé , known professionally as Mel Tormé, and nicknamed “The Velvet Fog”. An American musician, a singer of jazz standards, a jazz composer and arranger, drummer, an actor in radio, film, and television, and the author of five books. He composed the music for “The Christmas Song” (“Chestnuts Roasting on an Open Fire”) and co-wrote the lyrics with Bob Wells. 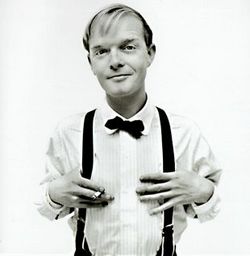 Truman Capote
(September 30, 1924 – August 25, 1984)
Born Truman Streckfus Persons. An American novelist, short story writer, screenwriter, playwright, and actor. Several of his short stories, novels, and plays have been praised as literary classics, including the novella Breakfast at Tiffany’s (1958) and the true crime novel In Cold Blood (1966), which he labeled a “nonfiction novel.” At least 20 films and television dramas have been produced from his work.

Don Knotts
(July 21, 1924 – February 24, 2006)
Born Jesse Donald Knotts. An American actor and comedian, best known for his role as Deputy Sheriff Barney Fife on The Andy Griffith Show, a 1960s sitcom for which he earned five Emmy Awards, and for his role as Ralph Furley on the highly rated sitcom Three’s Company from 1979 to 1984. He also starred in multiple comedic films, including playing Luther Heggs in The Ghost and Mr. Chicken(1966) and Henry Limpet in The Incredible Mr. Limpet (1964). In 1979 TV Guide ranked him #27 on its 50 Greatest TV Stars of All Time list.

Harry Warren
(December 24, 1893 – September 22, 1981)
Born Salvatore Antonio Guaragna. was An American composer and lyricist. Warren was the first major American songwriter to write primarily for film. He was nominated for the Academy Award for Best Song eleven times and won three Oscars for composing “Lullaby of Broadway”, “You’ll Never Know” and “On the Atchison, Topeka and the Santa Fe”. He wrote the music for the first blockbuster film musical, 42nd Street, choreographed by Busby Berkeley, with whom he would collaborate on many musical films. 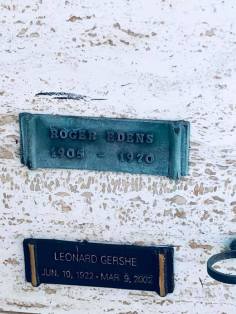 Roger Edens
(November 9, 1905 – July 13, 1970)
A Hollywood composer, arranger and associate producer, and is considered one of the major creative figures in Arthur Freed’s musical film production unit at Metro-Goldwyn-Mayer during the “golden era of Hollywood”. 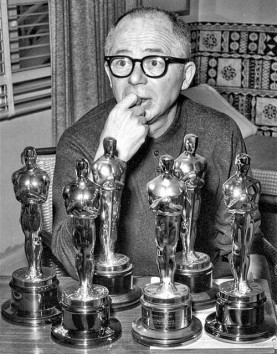 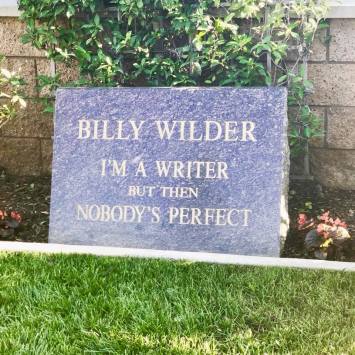 Billy Wilder
(June 22, 1906 – March 27, 2002)
Born Samuel Wilder. An Austrian-born American filmmaker, screenwriter, producer, artist, and journalist whose career spanned more than five decades. He is regarded as one of the most brilliant and versatile filmmakers of the Hollywood Golden Age of cinema. With The Apartment, Wilder became the first person to win Academy Awards as producer, director, and screenwriter for the same film. 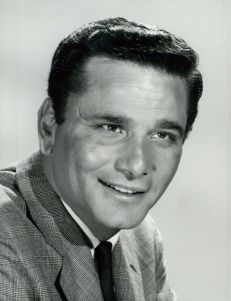 Carroll O’Connor
(August 2, 1924 – June 21, 2001)
Born John Carroll O’Connor. An American actor, producer, and director whose television career spanned four decades. A lifelong member of the Actors Studio, in 1970 O’Connor found widespread fame as bigoted working man Archie Bunker, the main character in the CBS television sitcoms All in the Family (1971-79) and its spinoff, Archie Bunker’s Place (1979-83). O’Connor later starred in the NBC/CBS television crime drama In the Heat of the Night (1988-95), where he played the role of Sparta, Mississippi police chief William (Bill) Gillespie. At the end of his career in the late 1990s, he played the father of Jamie Buchman (Helen Hunt) on Mad About You.

Jim Backus
(February 25, 1913 – July 3, 1989)
Born James Gilmore Backus. An American radio, television, film, and voice actor. Among his most famous roles were the voice of nearsighted cartoon character Mr. Magoo, the rich Hubert Updike III on the radio version of The Alan Young Show, Joan Davis’ character’s husband (a domestic court judge) on TV’s I Married Joan, James Dean’s character’s father in Rebel Without a Cause, and Thurston Howell III, on the 1960s sitcom Gilligan’s Island. He also starred in his own show of one season, The Jim Backus Show, also known as Hot Off the Wire.

Henny Backus
(March 21, 1911 – December 9, 2004)
A Broadway showgirl in the 1930s whose stage credits include Orson Welles‘s Horse Eats Hat. She was the wife of actor and comedian Jim Backus. 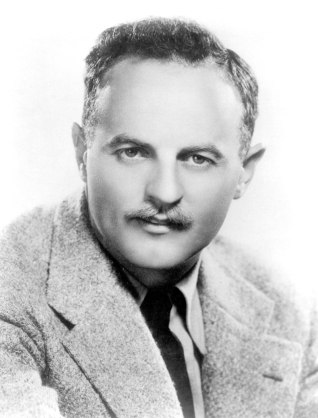 Darryl F. Zanuck
(September 5, 1902 – December 22, 1979)
Born Darryl Francis Zanuck. An American film producer and studio executive; he earlier contributed stories for films starting in the silent era. He played a major part in the Hollywood studio system as one of its longest survivors (the length of his career was rivaled only by that of Adolph Zukor). He earned three Academy Awards as producer for Best Picture during his tenure, but was responsible for many more. 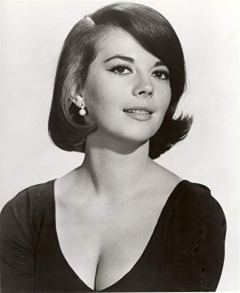 Natalie Wood
(July 20, 1938 – November 29, 1981)
Born Natalia Nikolaevna Zakharenko.  An American actress who began her career in film as a child and became a Hollywood star as a young adult. Wood received three Academy Award nominations before she was 25. She began acting in films at age 4 and was given a co-starring role at age 8 in Miracle on 34th Street (1947). As a teenager, she earned a nomination for the Academy Award for Best Supporting Actress for her performance in Rebel Without a Cause (1955), followed by a role in John Ford’s The Searchers(1956). She starred in the musical films West Side Story (1961) and Gypsy (1962), and she received nominations for the Academy Award for Best Actress for her performances in Splendor in the Grass (1961) and Love with the Proper Stranger (1963). Her career continued with films such as Sex and the Single Girl (1964), Inside Daisy Clover (1964), and Bob & Carol & Ted & Alice (1969). 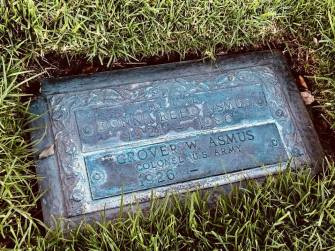 Donna Reed
(January 27, 1921 – January 14, 1986)
Born Donna Belle Mullenger. An American film, television actress and producer. Her career spanned more than 40 years, with performances in more than 40 films. She is well known for her role as Mary Hatch Bailey in Frank Capra’s 1946 film It’s a Wonderful Life. In 1953, she received the Academy Award for Best Supporting Actress for her performance as Lorene Burke in the war drama From Here to Eternity.

Eddie Albert
(April 22, 1906 – May 26, 2005)
Born Edward Albert Heimberger, known professionally as Eddie Albert. An American actor and activist. He was nominated for the Academy Award for Best Supporting Actor in 1954 for his performance in Roman Holiday, and in 1973 for The Heartbreak Kid.

circa 1955: Headshot portrait of actor Eve Arden resting her hand on her face. She wears a double strand of pearls and a blouse with ruffled sleeves and a plunging neckline. (Photo by Hulton Archive/Getty Images) 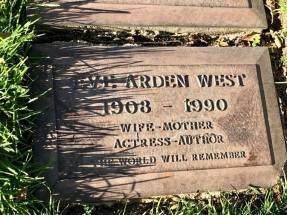 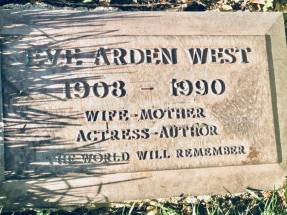 If you are visiting the Los Angeles area for the first time and want to pay your respects to some of these stars, Westwood Village Memorial Park is not to be missed.