Posted on February 19, 2020 by Annette Bochenek

As I had been doing for the previous days of the the festival, I got an early start and started attending screenings during the first batch of morning time slots. Among the many fine films being shown was Mad Love (1935), which I had been awaiting with enthusiasm.

The film was introduced by actor, writer, director, and producer Bill Hader. As part of his introduction to the film, he highlighted the cinematography of Karl Freund, who shot esteemed films such as Metropolis (1927), The Mummy (1932), and several others before transitioning to work on television programs. He would go on to shoot I Love Lucy and was one of the creators of the three-camera recording process. 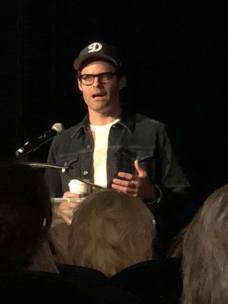 Among the many fine performers in the film was a child star by the name of Cora Sue Collins, who portrays a girl who is ill. She appeared in numerous films from an early age and worked with many other acting legends besides Peter Lorre in Mad Love. While discussing her achievements, Hader also noted, “She’s here!” The crowd vigorously applauded her as she stood in the dimly-lit Egyptian Theater and waved to the audience.

Hader also shared his description of the trailer for this film, which depicts Lorre at home and answering a telephone call to discuss his upcoming film, Mad Love. He addresses information about the story and his complicated character in a way that whets the appetite of the viewers. This film trailer style is definitely one that modern audiences do not encounter. Though it seems humorous to think of one of today’s stars partaking in a trailer of a similar fashion, it is difficult to argue against this intriguing approach to marketing a film and its lead.

The Complicated Legacy of Gone With the Wind (1939):

After delighting in Lorre’s brilliantly bizarre portrayal of the doctor in Mad Love, I decided to attend a discussion being held at the Hollywood Roosevelt Hotel regarding the complicated legacy of Gone With the Wind (1939). I have encountered both positive and negative criticism of the film for its depictions of the American South during the Civil War Era and have always been intrigued by the opposing viewpoints. More than anything, I think it is deeply important to study and examine these portrayals as part of film history and culture. I certainly do not see value in dismissing the opportunity for discussion or negating any given film that is subject to a multitude of opinions. Films are a powerful time capsule that allows us to examine society from the lenses of many different time periods and perspectives.

In the past, I visited several points of interest in relation to the film while in Georgia. Though I am aware of how the film is celebrated in the South, I had never attended a panel on the subject and was eager to consider the thoughts of the panelists. The event was held at Club TCM at the Hollywood Roosevelt Hotel. Panelists included producer Stephanie Allain; author and film critic Molly Haskell; University of Chicago Professor of Cinema and Media Studies Jacqueline Stewart; and film historian and author Donald Bogle. *Note: Several months after the festival, TCM announced that Stewart would be a new host, manning the Silent Sundays programming for the channel.

Haskell addressed the fact that modern audiences are sometimes uncomfortable with the film and its depictions of slavery. At times, they may be so uneasy that they decide to avoid the film. Haskell responded by saying, “It’s part of us. Those instincts are part of us. The need to be pure and righteous all the time is causing us to eliminate parts of our culture. What we need to do is have something like this and talk about it.”

The multiplicity of opinions about the film is also something that is acceptable, as individuals may find parts of the film that are laudable or others that they might not support. As an example, “You can say, from a female gaze, that character is so interesting at that point in time,” said Allain. “Most of our movies are created at the moment in which the artist is living and this was a specific gaze that has over the years been proven problematic for so many reasons.”

As several opinions were shared and questions were posed, one of the key points of the conversation was to discuss the films–not dismiss them. To sum up the session, Haskell aptly stated, “I think we are too afraid of being uncomfortable. Why shouldn’t we watch movies that make us uncomfortable? This is part of us.”

After attending the panel discussion, I could not believe that it was already time for me to choose my final film of the festival. I wound up selecting a favorite that I had seen many times before–Buck Privates (1941)–but in the newest venue to be added to the festival. This one took place at the Legion Theater at Post 43–a short Lyft drive away from Hollywood Blvd. The film was preceded with an introduction by TCM host Eddie Muller. In addition, there was a discussion between comedian Dennis Miller as well as writer and author Alan Zweibel. As a sidenote, I was excited to see Zweibel since I have admired his book, Bunny, Bunny: Gilda Radner, a Sort of Romantic Comedy for quite some time. 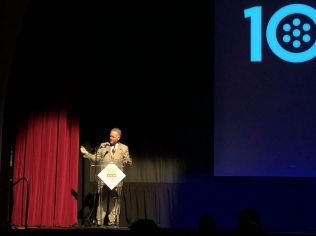 The film was only the second feature film in which Bud Abbott and Lou Costello appeared. Nonetheless, the film became Universal’s highest grossing feature that year, cementing Abbott and Costello in star billing for years to come.

While the film itself certainly did not disappoint, my decision to enjoy the film here was all the more excited, since I knew that one of the film’s stars had actually been to the Legion. In 1948, Costello himself graced the very stage at which the audience gazed.

Though the screenings and panels were through for this year’s fabulous festival, there was still much merriment to be had! TCMFF is like one big family reunion of film fans and friendships are made so easily. Before attendees’ travel plans scatter them all over the map once again, it is a delight to be able to share in some delightful classic film camaraderie to officially close the festival. I certainly did not waste time in milling about and saying goodbye (for now!) to the many wonderful friends I made or revisited during the course of the festival.

Being the 25th anniversary of TCM, the evening was made all the more special with a lovely toast to TCM’s future and some celebratory cupcakes. Though the festival came to a close all too soon, each day was a day well spent with many delightful people and, certainly, a fantastic array of classic cinema. This was the first TCMFF for me and as it came to a close, I was already dreaming of the next one. See you in 2020, TCM!