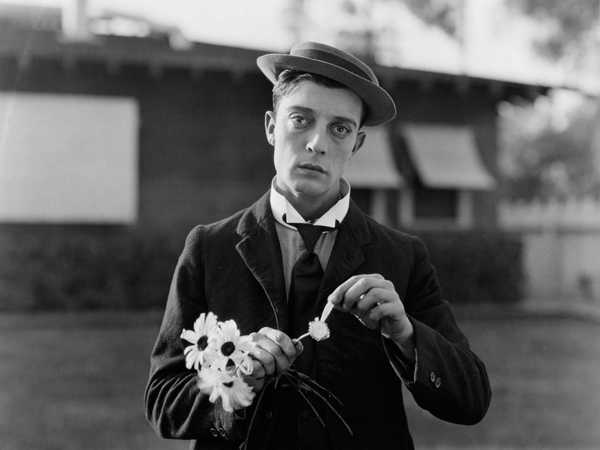 Each year, close to Buster Keaton‘s birthday in October, the International Buster Keaton Society (IBKS) holds a convention to honor its beloved star. While Keaton was born in Kansas, the small town of Muskegon, Michigan, is the locale that he called home. Since he traveled all over the country with his family of vaudeville performers, one place of semi-permanence, relaxation, and adventure was his family’s cottage at the Bluffton Actors’ Colony. As a result, the IBKS or “Damfinos,” as they call themselves, host the convention in Muskegon. A mannequin of Keaton stands at Muskegon’s welcome center, ready to greet a new crop of convention attendees. 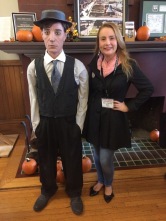 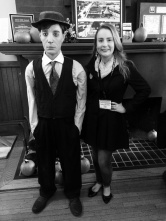 I first attended the IBKS convention in 2017 after a few years following posts about the fun that festival attendees had. There are certainly regulars who attend each year and look forward to the happy reunion but there are also many new faces–of which I was one. Nonetheless, all are welcome and I found that attendees were so delighted to see first-time attendees. Though I was flying solo on this trip, I made some friendships as a result of this celebration and appreciated many invitations to enjoy a meal or socialize between convention presentations.

Today, Muskegon is a town that, while existing in the present, continues to nod to a storied past. The original streetcar rails are still visible and the scenery while Keaton enjoyed and arguably drew much nautical inspiration continue to remain. 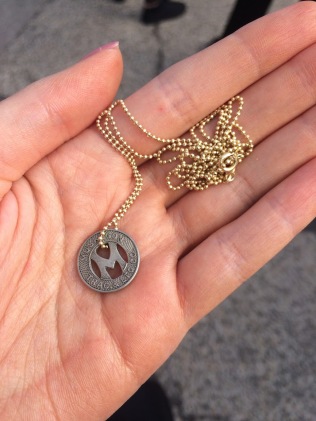 Once I checked in to the historic Shoreline Inn and raided the IBKS gift shop the night before, I was eager to begin my convention adventures and immerse myself in all things Keaton. At the very top of my list was Ron Pesch’s walking tour of the Bluffton Actors’ Colony, which was saturated with fascinating information about Keaton’s ties to the area and the many other vaudeville performers who came here to rest and prepare for another season on the road. 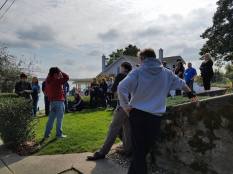 Both the colony and Keaton are remembered with a historic marker, which was highlighted on the tour. 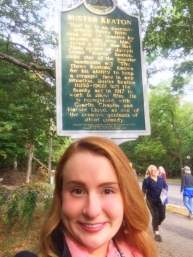 One of the most moving moments for me was standing on the site of the Keaton cottage, Jingle’s Jungle. On the property, visitors can still find the handwriting of Keaton’s parents, Joe and Myra, etched into the cement wall.

As part of the walking tour, visitors stood on many sites that were of relevance to Keaton’s early years and later visits to Muskegon. One location was notable because it is the site at which an older Keaton was photographed on a return trip to Muskegon. While the location has changed, a red fire hydrant still marks the spot. 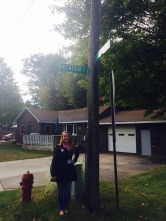 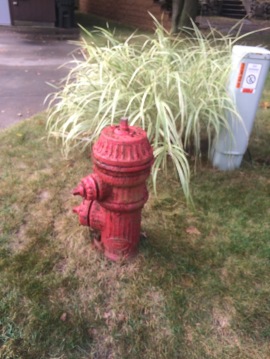 During the same return trip, Keaton was also photographed visiting a beloved site from his childhood–an empty field that functioned as a baseball diamond. It is on this same location that the walking tour comes to a close and the wonderful chance to play a game of baseball exactly where Keaton used to play. Unfortunately, when I attended this convention, it was made clear that this space was precious but threatened with plans of being repurposed. As of 2019, plans to transform this site into a housing development are underway. 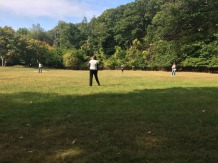 The walking tour was followed by the opportunity to enjoy various panels and presentations about Keaton’s life. In particular, logger Lea Stans offered a wonderful presentation about the Minnesota State Fair and Keaton’s connections to various state fairs, while David Pearson discussed the career of Lupino Lane in relation to Keaton’s own career in comedy. For me, one of the highlights was attending James Dangerfield’s one-man musical show about the life of Keaton, entitled, When You Fall Down. 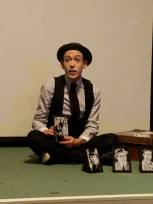 Overall, it is refreshing to see Keaton’s life continuing to inspire discussion, creativity, and scholarship to this day. The convention in Muskegon continues to attract Keaton fans from all over the world to partake in this array of presentations and the opportunity to spend some time in Keaton’s footsteps. 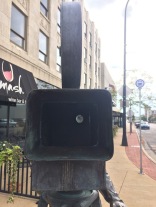 The convention culminated at the Frauental Center with a screening of one of Keaton’s films, followed by a 1920s-themed gala and auction. Furthermore, a statue of Keaton and a camera continues to greet convention attendees and relatives of Keaton outside of the Frauenthal Center to this day. Of course, this annual celebration of a comedic giant is well worth attending.