Herbie Brown: What time is it?

Slicker Smith: None of your business!

Out of the many Abbott and Costello films that the famous comedic duo of Bud Abbott and Lou Costello made, Buck Privates (1941) is easily my favorite. A humorous story set against a more serious contextual backdrop, the film is loaded with iconic moments, including Bud and Lou’s antics, rousing musical numbers by the Andrews Sisters, and a strong supporting cast of characters.

In this musical military comedy, Abbott and Costello appear as two sidewalk salesmen who sell neckties until a policeman tries to put a stop to it. While they are chased by him, they run into a movie theater and are unaware that it is being used as an Army enlistment venue. Abbott and Costello assume they are entering into a contest to win prizes at the theater but end up enlisting in the Army. Facing either arrest or the Army, they head for training. 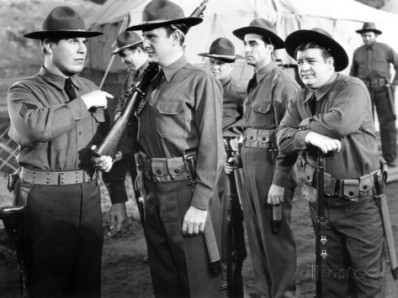 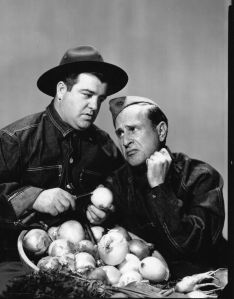 Along the way, viewers are introduced to other characters. Randolph Parker, a spoiled, wealthy playboy and his valet, Bob Martin, are on their way to enlist. Martin is ready to fight, whereas Parker is ready for his father to use social status in a way that allows him to avoid service. The entrance of camp hostess Judy Gray, Martin’s friend, complicates matters, as Parker soon vies for her attention.

To Abbott and Costello’s surprise, the policeman who chased the is now their drill instructor. Each of these characters build relationships with one another during training, to the tune of the Andrews Sisters’ patriotic and sentimental renditions peppered throughout this fun story. As is typical of Abbott and Costello films, Costello finds himself getting into noticeably deeper trouble than the smooth-talking Abbott, even to the point of causing chaos for the camp chef, played by another comedic talent–Shemp Howard. 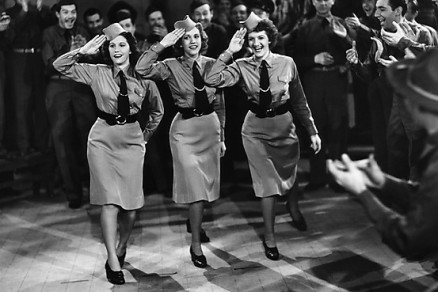 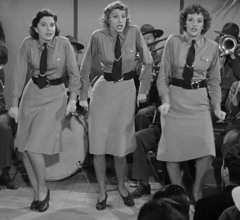 Buck Privates is the film that would cement Abbott and Costello as comedy stars. Moreover, the film was the first service comedy based upon the peacetime draft in 1940, followed by two additional films in which the duo would appear–In the Navy (1941) and Keep ‘Em Flying (1941). Buck Privates would merit a sequel in 1947 with Buck Privates Come Home.

Directed by Arthur Lubin and produced by Alex Gottlieb, the film shows off the talents of Abbott and Costello alongside a fine roster of other talents. The cast list for this film is as follows:

Written by Arthur T. Horman and distributed by Universal Pictures, this film also placed a special emphasis on highlighting the Andrews Sisters. The trio of singing sisters were also under contract for the studio. As a result, Buck Privates was actually one of three Abbott and Costello films in which their act was featured.

The Andrews Sisters perform four numbers in the film, including “You’re a Lucky Fellow, Mr. Smith,” “Boogie Woogie Bugle Boy,” “Bounce Me, Brother, With a Solid Four,” and the dreamy “(I’ll Be With You) In Apple Blossom Time.” The studio was opposed to using “(I’ll Be With You) In Apple Blossom Time” because of fees required by the publisher. Not wanting to miss the opportunity to bring the song to the screen in their own vibrant way, the Andrews Sisters paid the fee on their own and the song would become one of their most requested numbers throughout the duration of their act. The two composers of the first three aforementioned songs do appear in the film as recruits alongside Abbott and Costello.

Despite the film running over budget and over schedule, it received praise from critics. The film even received Academy Award nominations for Best Original Song, thanks to Hughie Prince and Don Raye’s “Boogie Woogie Bugle Boy”, in addition to Charles Previn being nominated in the category of Original Music Score. The film was Universal’s top-grossing film of the year.

On the opposite side of the War, Japan actually used this film as propaganda. They screened the film to their troops to display the “incompetence” of the U.S. Army. The U.S. troops also happened to see the film in each theater of war to boost morale and delight in the antics and entertainment offered by the film. The film would see a morale-boosting re-release in 1948 and again in 1953 during the Korean War.

Today, the film remains as entertaining as it did upon its release. Abbott and Costello’s routines continue to amuse and the sub-plots in the film are enjoyable. For me, however, the songs truly steal the show and make this particular installment in the Abbott and Costello repertoire all the more special.