Posted on February 25, 2019 by Annette Bochenek 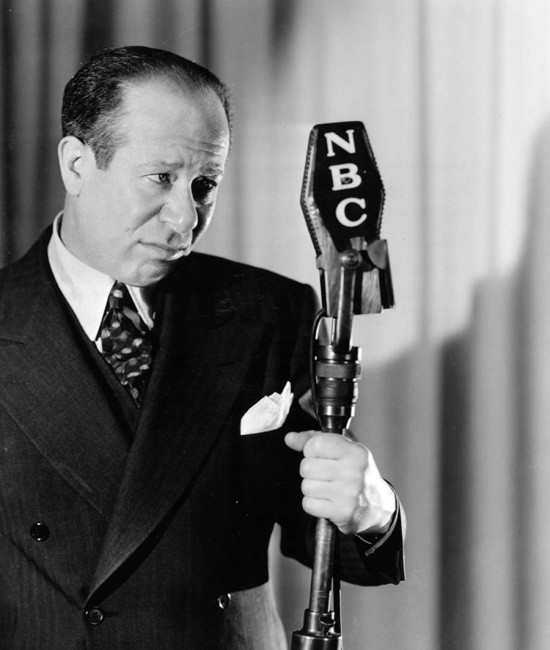 “If you want to be a success in Hollywood, be sure and go to New York.” –Bert Lahr

Bert Lahr was lucky enough to have an iconic role in one of the most beloved films of all time. While many will recall his performance as the Cowardly Lion in The Wizard of Oz (1939), his experience as an energetic performer extended beyond this critical role.

Irving Lahrheim was born in New York City on August 13, 1895, to German Jewish immigrants Jacob and Augusta Lahrheim. Jacob worked in upholstery. Irving was the oldest of three children, including two sisters named Cecelia and Babe.

Irving grew up in the Yorkville section of Manhattan, dropping out of school during his first year of high school to join a juvenile vaudeville act. He took on the stage name of Bert Lahr and gradually worked his way up to top billing while working for the Columbia Amusement Company. His Broadway debut came in 1927 in Delmar’s Revels, which had Lahr playing to full houses. During the show’s run, he performed the classic “Song of the Woodman” routine, which he carried out in the 1938 film, Merry-Go-Round. 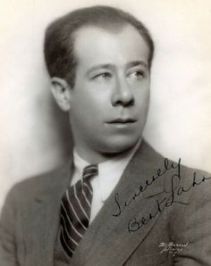 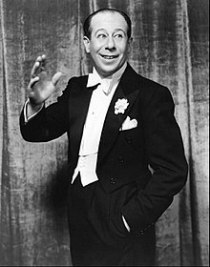 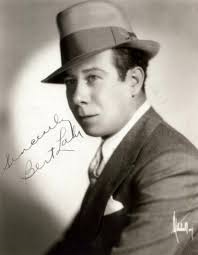 Lahr’s first big success was in the stage musical Hold Everything!, which ran from 1928-9.  In the show, he played a prizefighter. This performance was followed by roles in other stage musicals, including Flying High (1930), Florenz Ziegfeld’s Hot-Cha! (1932), and The Show is On (1936). In 1939, he worked alongside Ethel Merman as part of the Broadway production of DuBarry Was a Lady. 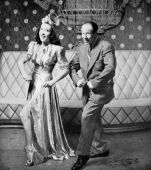 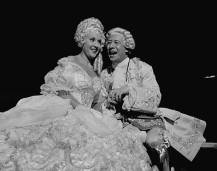 Actor Bert Lahr as Louix XV, moving in on actress Ethel Merman, as Madame Du Barry, his mistress who is bent on rebuffing his advances in the Broadway production of Cole Porter’s new musical Du Barry Was a Lady. (Photo by George Karger/Pix Inc./The LIFE Images Collection/Getty Images)

Lahr’s film debut came in Flying High (1931), in which he reprised his stage portrayal of the show’s aviator character. He then signed with Educational Pictures in New York, which led him to work in a series of two-reel comedies. Once the series ended, Lahr headed to Hollywood to work in feature films. Beyond his role in The Wizard of Oz (1939), he appeared in numerous shorts and typically appeared in musical comedy films. However, none of these films offered him roles that were quite as memorable as the one he executed in The Wizard of Oz. Moreover, his acting style—typically full of broad gestures and overstated reactions—was better suited for the stage.

The Wizard of Oz would be Lahr’s 17th film and called for him to wear a costume composed of lion fur. Under the high-intensity studio lights required of Technicolor, the costume was unbearably hot. Despite this, Lahr crafted many ad-lib lines for his character. In some cases, several takes were required, as other cast members—especially Judy Garland—could not complete the scenes without laughing. Additionally, the Cowardly Lion is the only character in the film to sing two solo numbers—“If I Only Had the Nerve” and “If I Were King of the Forest”. 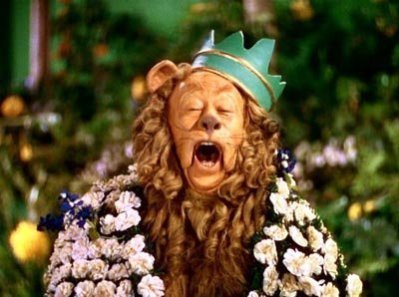 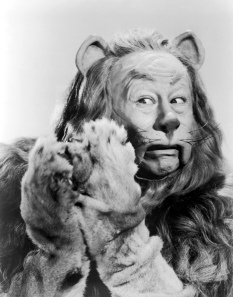 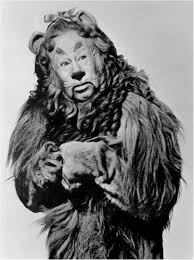 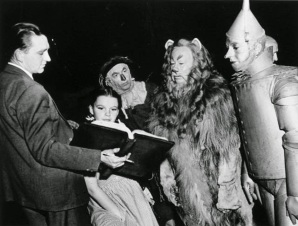 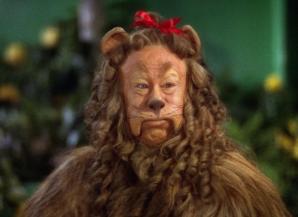 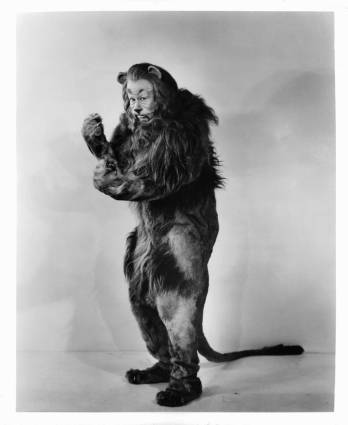 Bert Lahr as the Cowardly Lion in a scene from the film ‘The Wizard Of Oz’, 1939. (Photo by Metro-Goldwyn-Mayer/Getty Images)

During this time, Lahr wed his second wife, Mildred Schroeder. Lahr’s first wife, Mercedes Delpino, developed mental health problems that led to institutionalization. However, in the early 1930s, Lahr started seeing Schroeder while Delpino was institutionalized. Nonetheless, Lahr still loved Delpino and was reluctant to divorce her. Schroeder left Lahr in 1936 to marry another man but eventually returned to Lahr, who obtained a divorce from Delpino a year later. Lahr and Schroeder would have three children: Herbert, John, and Jane. Though Lahr divorced Delpino, he still loved her and divorced her because her severe mental state made it impossible for her to function in a marriage. When she died in 1965, Lahr did not speak for three days. Schroeder and Lahr remained married until Lahr’s death in 1967.

Lahr soon returned to theater, co-starring in the U.S. premiere of Waiting for Godot in 1956 at the Coconut Grove Playhouse in Miami, Florida. According to John Lahr, Bert’s son, the performance was a flop largely because of the director’s choices, including the decision to limit Lahr’s movements on stage. When Lahr reprised his role with a new director on Broadway, Lahr was offered more freedom in his performance. The short-lived Broadway run was more successful than the performances in Miami. In 1960, Lahr won the Best Shakespearean Actor of the Year Award at the American Shakespeare Festival for his appearance as Bottom in A Midsummer Night’s Dream. Later, in 1964, he won the Tony Award for Best Leading Actor in a Musical for his role in Foxy. 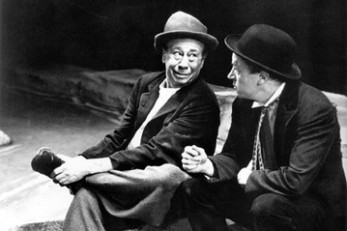 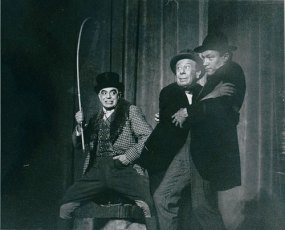 In addition to working in films and on stage, Lahr also appeared on television. He introduced several productions on the air, performed in commercials, in addition to acting in different featurettes.

Lahr was filming The Night They Raided Minsky’s when he died on December 4, 1967. While the newspapers reported that he died of pneumonia due to the damp studio where the film was shot, but he passed away from a hemorrhage and undiagnosed complications from cancer. His completed scenes were left in the film. When Garland heard of his passing, she was about to go on stage in Las Vegas, Nevada. At her performance, she dedicated “Over the Rainbow” to Lahr, referring to him as “my beloved Cowardly Lion.” 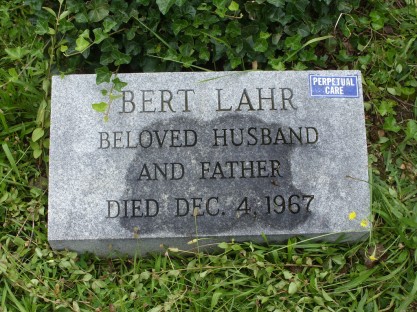 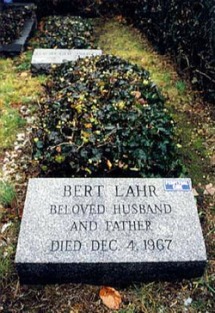 Today, there are few places in existence that would have been of relevance to Lahr during his lifetime. According to the 1920 census, the Lahrheim family resided at 1454 Wilkins Ave. in New York City, New York. Here is a shot of the property today: 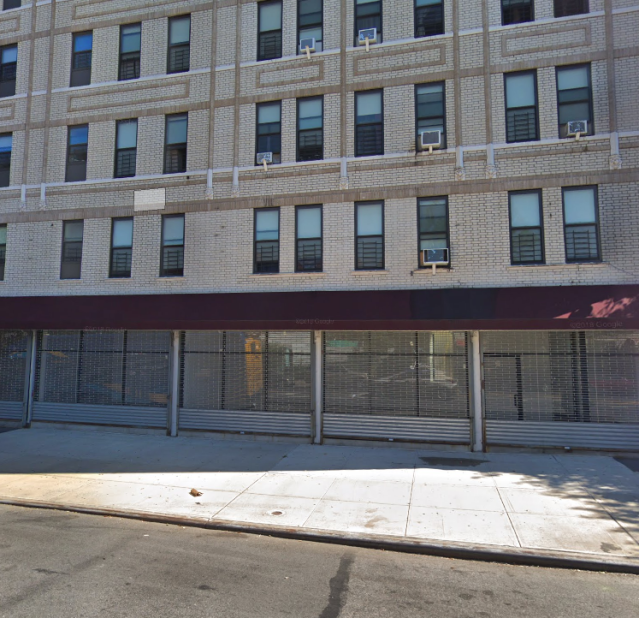 By 1940, Lahr was living at the Waldorf Astoria. Among his fellow residents were Cole and Linda Porter. In 2016, the hotel announced plans for refurbishment and to convert some of the rooms to condominiums. Several rooms would be turned into apartments, while other would remain as hotel suites. The hotel plans to reopen in 2020. In 2017, the New York City Landmarks Preservation Commission voted unanimously to list the interiors of the hotels notable public spaces as landmarks, protecting them from any alteration. The hotel is located at 301 Park Avenue, Manhattan, New York City. 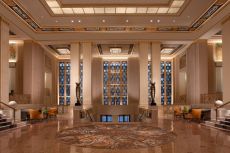 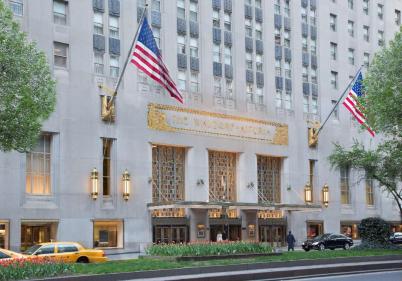 Perhaps the best tribute to Lahr is the Cowardly Lion costume itself. In 2014, the costume sold for over $3 million at the Bonham’s Turner Classic Movies auction. Today, the costume is on display at the Museum of Pop Culture in Seattle, Washington, located at 324 5th Ave N. 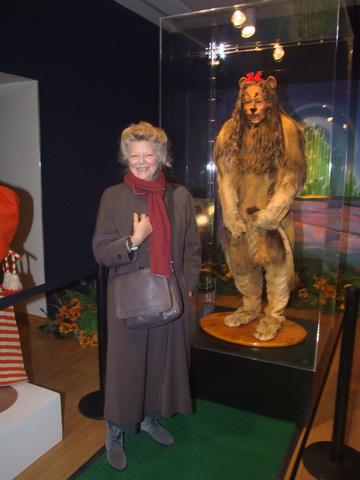 Jane Lahr posing with her father’s costume in 2014. 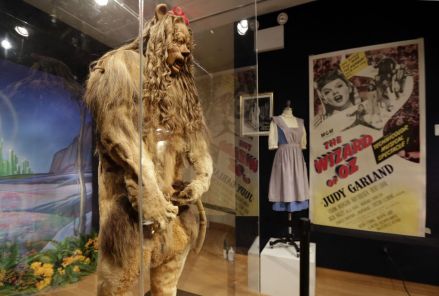 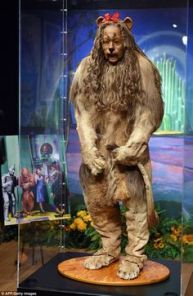 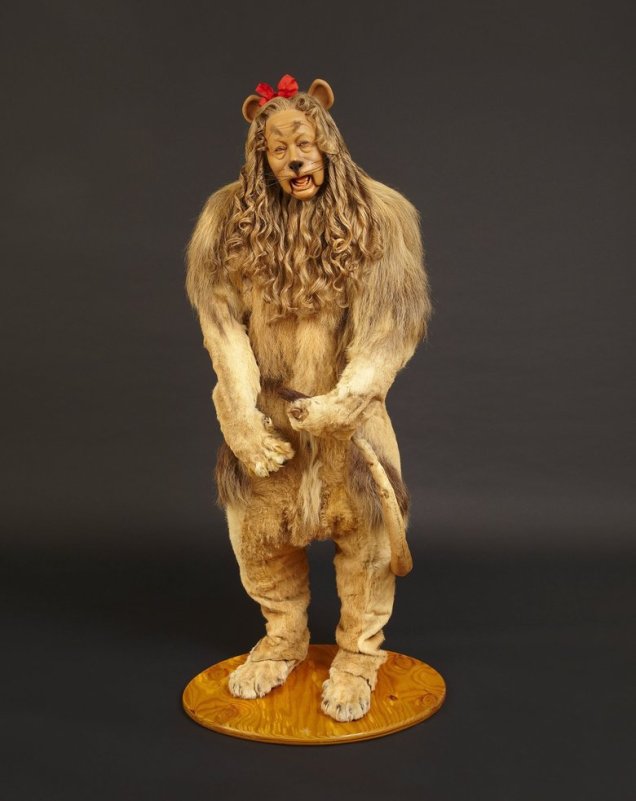 Whether you are in New York or in Seattle, you can easily pay tribute to Lahr and one of classic cinema’s most beloved characters.