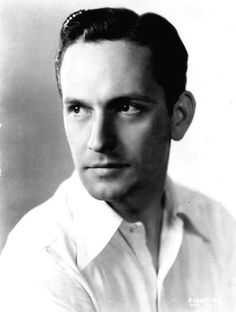 “I liked the name Frederick Bickel and I wish now I had left it as it was. After all, Theodore Bikel, whose name was similar though spelled differently, didn’t change his, and he did alright.” -Fredric March

Fredric March was one of the most gifted performers of his day. Carrying himself in dignity and poise, he took on a variety of roles and fully devoted himself to his many portrayals. Though often overshadowed by some of his peers, his films and legacy are well worth exploring.

March was born Ernest Frederick McIntyre Bickel on August 31, 1897. His mother, Cora Brown Marcher, was a schoolteacher, and his father, John F. Bickel, was a Presbyterian Church elder who worked in the hardware business. The family resided in Racine, Wisconsin, where young Frederick spent the majority of his early years. He attended Winslow Elementary School and Racine High School.

Upon his graduation with honors, Frederick served as an artillery lieutenant in World War I and entered the working world as a banker for First National City Bank, but an emergency appendectomy caused him to reconsider his career path. While recovering, his property owner, who happened to be a former actress, shared anecdotes about her days in the theater. Frederick was mesmerized.

Rather than pursuing the life of a banker, Frederick rerouted to a career in show business, working as an extra in films made in New York City. Interestingly, Frederick is credited as saying, “I have earnestly endeavored to perform my own share without fuss or temperament. An actor has no more right to be temperamental than a bank clerk. Possibly, a very sane bringing up as a child has helped me to retain my sense of proportion in these matters.”

It was around this time that Frederick adopted a shortened form of his mother’s maiden name, and began appearing as Fredric March. Since he considered 12 his lucky number, he shortened Frederick to “Fredric” and Marcher to “March.” As of New Year’s Day, 1924, Fredric March was born, and actively seeking employment as an actor. He modeled Arrow shirts, cravats, shoes, and shaving creams, in order to earn extra money while auditioning for various performances. In 1926, he found employment on Broadway, and signed a film contract with Paramount Pictures by the end of the decade. 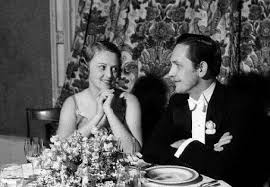 Once March arrived in Hollywood, it did not take long for him to emerge as a key player. He received an Oscar nomination in 1930 for a role based upon John Barrymore in the film The Royal Family of Broadway (1930). He won the Academy Award in 1932 for Dr. Jekyll and Mr. Hyde (1931). He tied with Wallace Beery, who was nominated for The Champ (1931), though he won by one vote. Afterwards, he starred in a series of several films, which were based upon classic texts.

March was a moderate smoker and mild drinker. He loved to write letters, and kept up a massive correspondence. Enjoying his celebrity, he never allowed publicity men to ghostwrite articles for him, as he preferred to write and respond to newspapers and magazines on his own.

Somewhere along the way, March found the time to sign some autographs. Here is my Fredric March signature from my personal collection:

Overall, March was also extremely active. He would keep in shape by swimming, playing tennis, horseback riding, playing golf, and traveling. Incidentally, he made tours for the USO that covered roughly 40,000 miles, while also volunteering at the Stage Door Canteen and participating in other fundraising activities. Additionally, he enjoyed reading and photography. 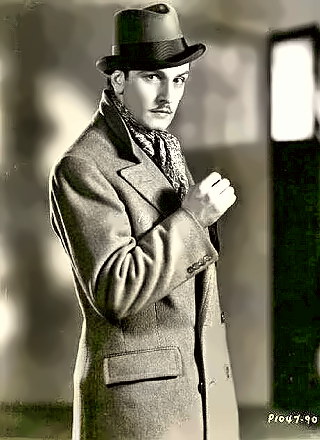 March strategically avoided signing any long-term contracts with studios, which allowed him to appear in films produced by several different film studios. In fact, he came in second in an audience poll for the role of Rhett Butler in 1939’s Gone with the Wind. After a ten-year absence from the stage, March returned to Broadway, but starred in a flop. Nonetheless, he devoted himself to the stage as much as he had to films, and would go on to earn two Best Actor Tony Awards. He won his second Oscar for his favorite movie role in The Best Years of Our Lives (1946). 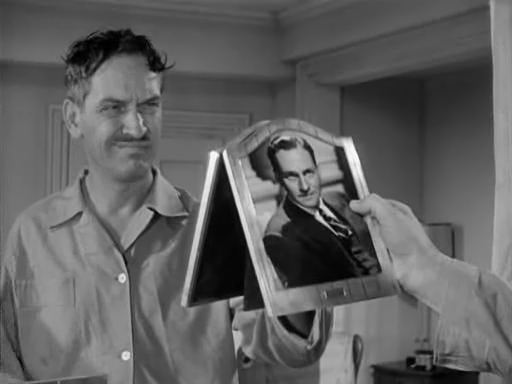 In between this balancing act of stage and film roles, Producer Jesse L. Lasky fought to convince Warner Brothers to produce a screen biography about American author Mark Twain. March had been suggested by Twain’s only living daughter, Clara Clemens Gabrilowitsch, who informed Lasky that she would not help with the film unless March starred in it as her father. Nonetheless, March was doubtful about taking on the role of Twain. He finally accepted the role after shooting a test scene of himself made up to be a 65-year-old Mark Twain. When a picture from this screen test surfaced, Twain’s daughter thought that someone had discovered a new archival photo of her father. 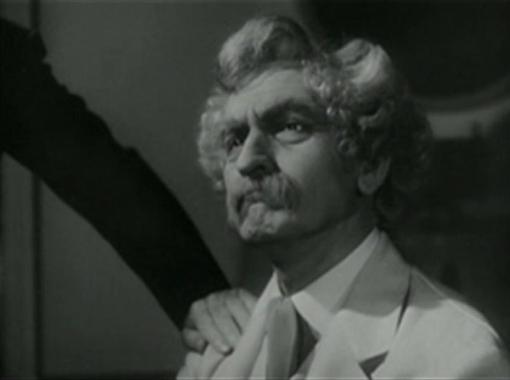 While most of March’s work after 1950 was on the stage, he did appear on television. In fact, he co-hosted the Academy Awards ceremony from New York City with co-host Donald O’Connor in Los Angeles in 1954.

With his career shifting back to the stage, March moved East to a Connecticut farm and happened to be neighbors with playwright Arthur Miller. In fact, March was offered the role of Willy Loman in Death of a Salesman (1949), but regrettably turned it down. 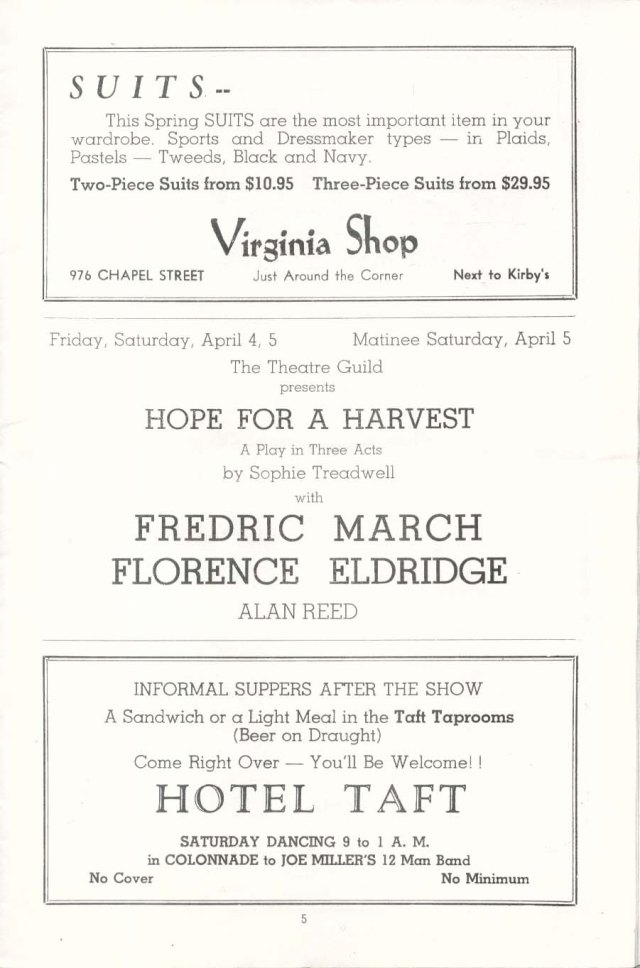 Though March focused more upon the stage, he did not completely abandon the film industry. He appeared in The Desperate Hours (1955) with Humphrey Bogart and Spencer Tracy (a fellow Wisconsin native), as well as in the 1960 film Inherit the Wind.

On February 12, 1959, March appeared before Congress to perform a reading of the Gettysburg Address, in order to commemorate the anniversary of Abraham Lincoln’s birth. This was not the only time that March performed in Washington. Apparently, in 1963, President John F. Kennedy called upon him to perform a dramatic reading at a White House dinner. 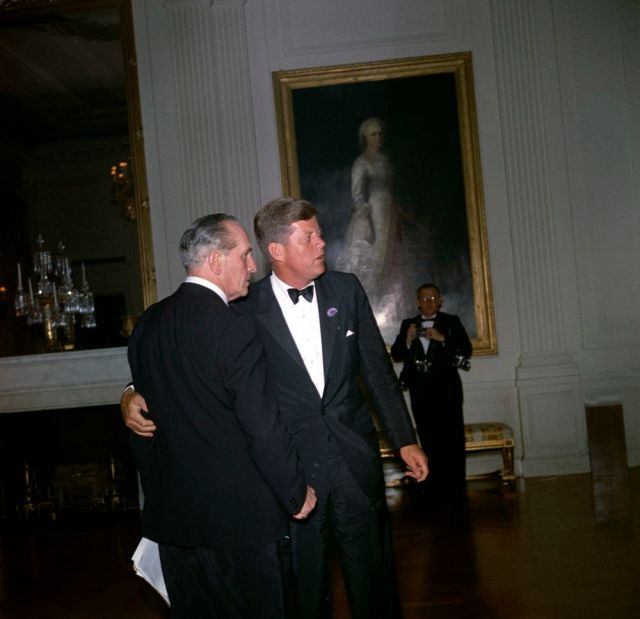 March was diagnosed with prostate cancer and had to undergo surgery in 1970. Nonetheless, he still gave one last performance in 1973 for The Iceman Cometh. March passed away on April 14, 1975, in Los Angeles, and was cremated and buried under a favorite tree on his farm in Connecticut. The New Milford, Connecticut, property was later leased to playwright Lillian Hellman, as well as Henry Kissinger. 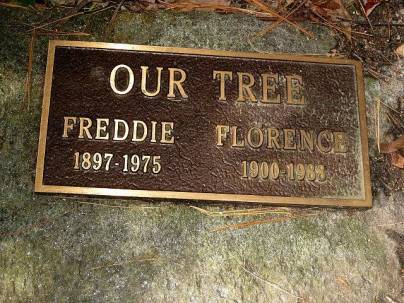 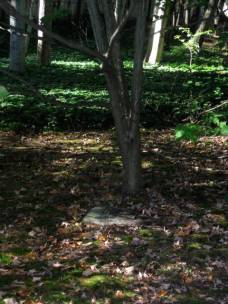 Today, March’s Racine homes have not changed much on the outside. They remain on a street that is paved with the same brick paths that he would have remembered, just blocks away from breathtaking views of Lake Michigan. The residential area is quiet and charming, boasting quaint homes and tree-lined streets.

Winslow School, which was March’s elementary school, still stands, but has closed as a freestanding elementary school as of 2006. At present, it is an alternative school. It is located 1325 Park Ave in Racine. 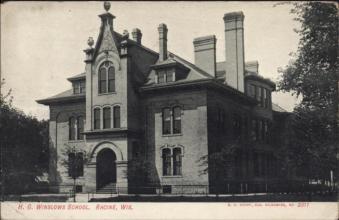 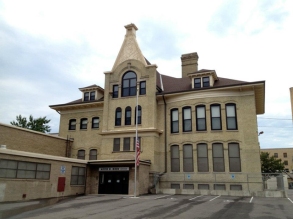 Racine High School, the first public high school in Wisconsin, was demolished in 1929. 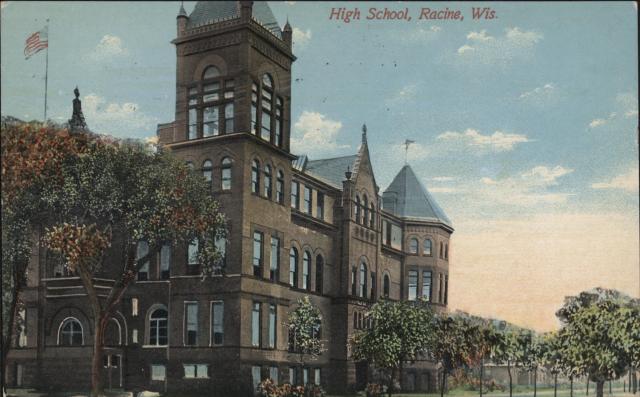 While Racine High School no longer stands, I was lucky enough to access their yearbooks, courtesy of the Racine Public Library. They handed me a stack of yearbooks from the early 1900s, and somehow I managed a victory with the first one! 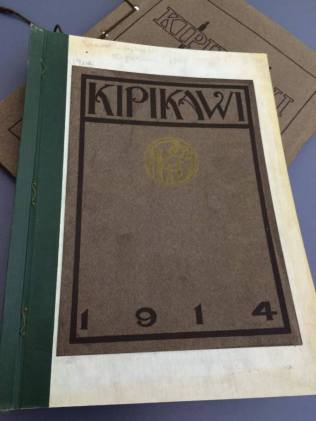 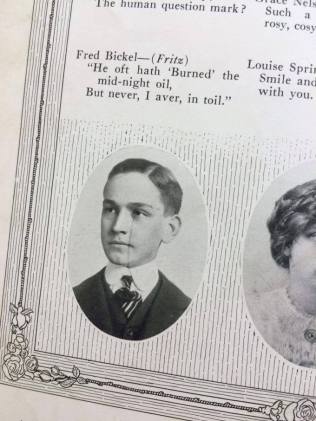 Upon paging through this yearbook, I was stunned to see how involved Fredric was in his school community. At the time, of course, he is still going by his given name of Frederick Bickel.

The yearbooks were fascinating to page through. I thought that the quotes were especially fun, so I thought I’d share a few more highlights, although they are not related to Fred. If you’re curious, please click on the photos to enlarge them.

The University of Wisconsin-Oshkosh memorialized Fredric March with the 500-seat Fredric March Theater. March attended its dedication in 1971. 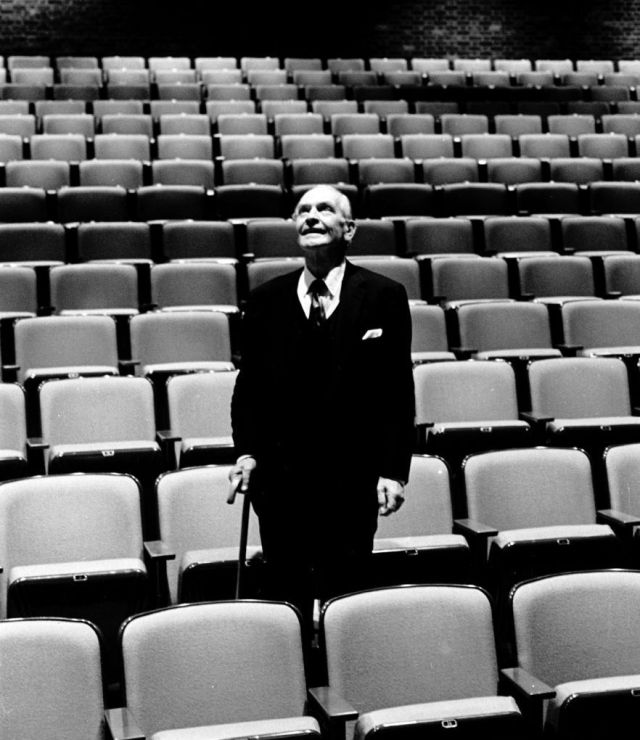 The University of Wisconsin-Madison, March’s alma mater, holds the Fredric March Play Circle Theater, which is located on the second floor of Memorial Union. 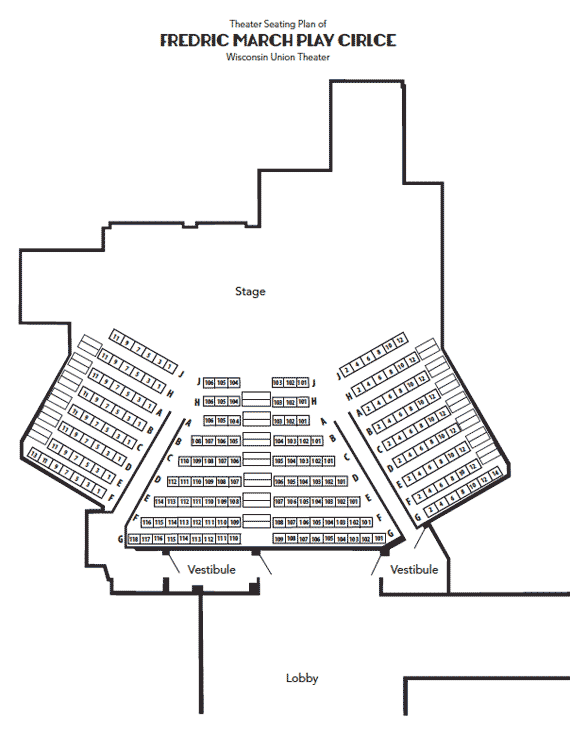 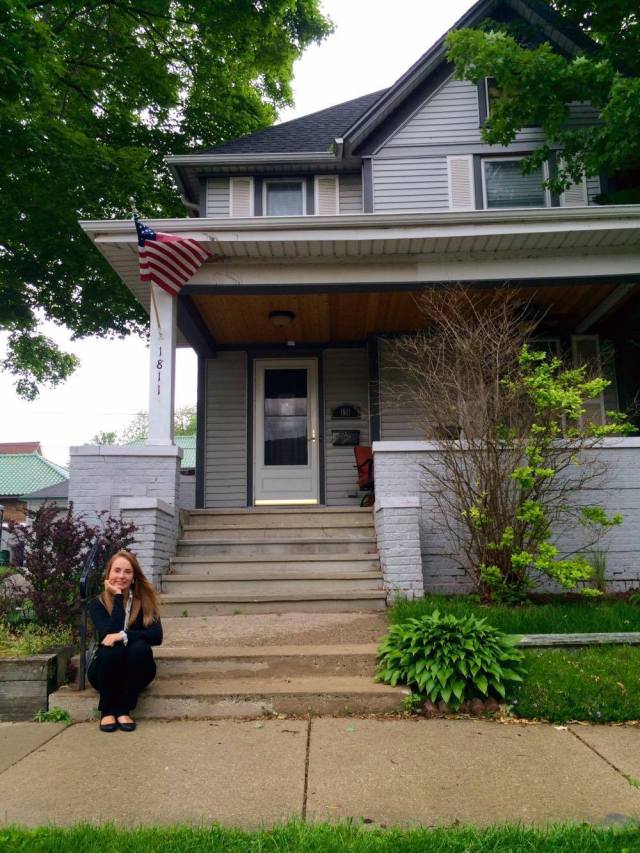 I mentioned the old tree-lined streets and brick paving. Here are some shots of the street: 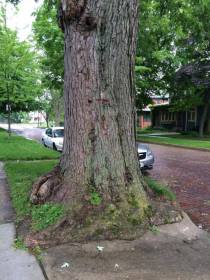 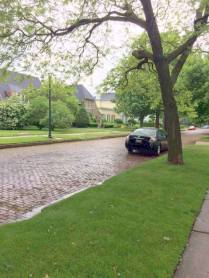 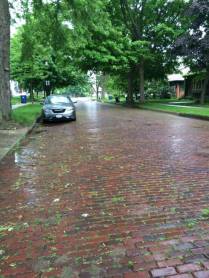 Another one of March’s childhood homes also stands just a few blocks away from his initial home. The address is 1635 College Ave. and it is also privately owned. Here it is today: 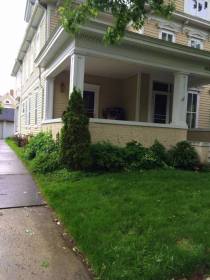 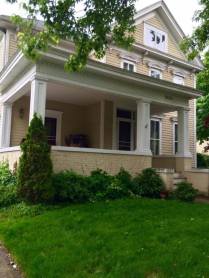 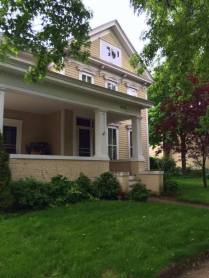 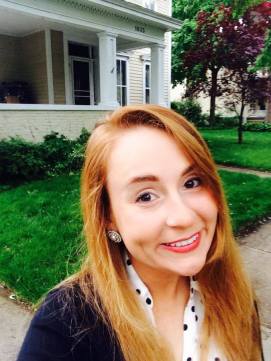 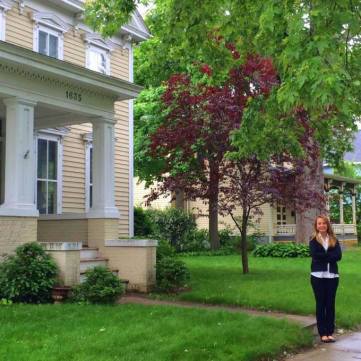 While there are no plaques or obvious dedications to March in Racine, the places he called home exist today and are well-maintained. Whether or not the owners are aware of the historic significance behind these buildings and their ties to someone who would become a Hollywood leading man during the Golden Age, it is heartening to see them in excellent condition. Should you find yourself in Racine, a stroll through March’s childhood neighborhood is highly recommended.