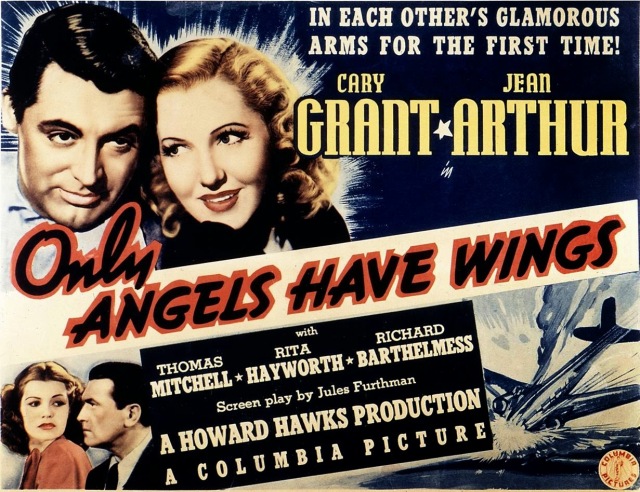 “Tell you what—I’ll toss a coin. Heads: you stay; tails: you go.” –Geoff Carter, portrayed by Cary Grant in Only Angels Have Wings (1939)

In 1903, two brothers proved that a mere rickety contraption could propel them towards realizing one of the deepest dreams of mankind. As the North Carolina sun graced Kill Devil Hills and the rigid wings of the Wright Flyer, so, too, did man soar into a novel and romanticized mode of transportation: flight.

Howard Hawks’s 1939 film, Only Angels Have Wings, functions as a salute to the wonders and risks of aviation, as well as the professionalism of pilots. Moreover, the tale is based largely upon experiences that Hawks himself had encountered, paying tribute to pilots both loved and lost. 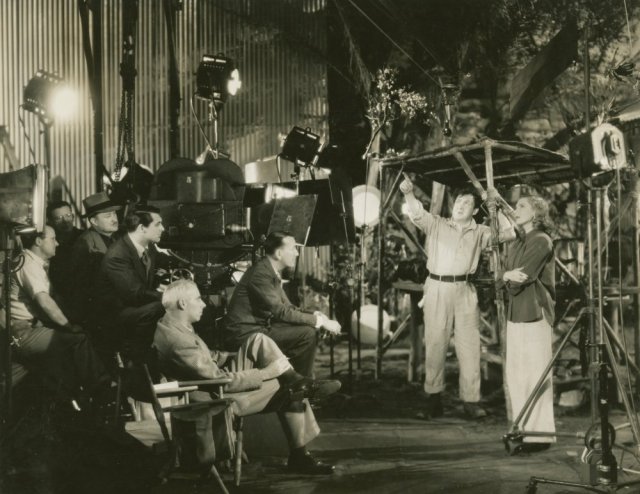 Hawks’s film possesses a distinct no-nonsense realism. Inspired by a somber flight crew he had encountered in Mexico, Hawks’s characters are stoic in the face of death, enjoy a deep camaraderie between their specific community of aviators, and carry out tasks assigned to them—even if they may lead to their demise. Amidst the brooding backdrop of the isolated fictional town of Barranca, South America, the sense of brotherhood between the aviators is especially strong. In short, all they have is each other.

Cary Grant portrays Geoff Carter, a pilot working for Barranca Airways. “Dutchy” Van Ruyter, who is played by Sig Ruman, owns the airline, while Carter and fellow pilots carry airmail from Barranca to a high pass in the Andes Mountains. Jean Arthur enters as Bonnie Lee, a piano-playing entertainer, who develops a sincere affection for Carter, and fascination with aviation. The following exchange occurs in front of Carter’s plane:

Bonnie: Oh, it’s the most wonderful thing I’ve ever seen.
Geoff: Yes. Reminded you of a great big beautiful bird, didn’t it?
Bonnie: No, it didn’t at all. That’s why it’s so wonderful. It’s really a flying human being.
Geoff: Well, you’re right about one thing. A bird would have too much sense to fly in that kind of muck.

Lee’s pursuit of Carter is interrupted as she gradually becomes aware of the dark realities which constantly face the community of aviators. One pilot named Joe, for example, dies due to flying irresponsibly. Bonnie is extremely shaken by the matter-of-fact way in which the pilots treat the death of one of their comrades.

The other aviators mock her, while Geoff coldly offers her to reflect upon the following reality: “All the weeping and wailing in the world won’t make him any deader 20 years from now. If you feel like bawling, how do you think we feel?”

Bonnie processes the loss, unable to comprehend how Joe’s fellow aviators were able to accept the loss so nonchalantly. However, she has an epiphany while conversing with a non-flying radio-operator named Sparks, portrayed by Victor Kilian.

Bonnie: All my life, I’ve hated funerals. The fuss and bother never brings anybody back. It just spoils remembering them as they really are. And when I see people actually facing it that way, I have to act like a sap. This flying business is new to me.
Sparks: You have to have some crazy way of looking at it to go on.
Bonnie: Does this sort of thing happen very often?
Sparks: Well, that depends on weather and luck.

Feeling that she has grown up as a result of accepting this reality, she leads the aviators in a rousing sing-along to “The Peanut Vendor,” much to Carter’s disbelief and amusement.

Later, Bat MacPherson, portrayed by famed silent film actor Richard Barthelmess, enters the community with his wife, Judy, igniting both memories of a past romance between Carter and Judy, as well as the painful recollection of yet another casualty. MacPherson has an infamous reputation amidst the aviation community because he bailed out of a plane, leaving his mechanic to perish. The mechanic happened to be the brother of pilot “Kid” Dabb, played by character actor Thomas Mitchell, who is Carter’s best friend. Carter is forced to ground Kid due to failing eyesight, and reluctantly hires MacPherson in his stead, but only when MacPherson agrees to fly the most dangerous missions.

Incidentally, Hawks had a pilot friend who once parachuted from a burning plane. His co-pilot died in the crash, and fellow pilots shunned the pilot throughout the remainder of his life. Unlike the fate of Hawks’s friend, Hawks offers the character of MacPherson the possibility of redemption among other fliers.

Dutchy arrives with the news of potentially securing a lucrative government mail contract if his airline can provide reliable service during a trial period. Unfortunately, the last day of the trial is riddled with bad weather, which closes the mountain pass. While Carter grapples with the reality of taking a Ford Trimotor on a dangerous mission, Bonnie must accept uncertainty as an ever-present actuality, should they continue their romance.

Cary Grant was no stranger to working with Howard Hawks, as Hawks had already directed him in Bringing Up Baby the year before. Hawks cast Jean Arthur in the role of Bonnie after being pleased with her appearances in several Frank Capra films, although the relationship between Arthur and Hawks was largely strained. 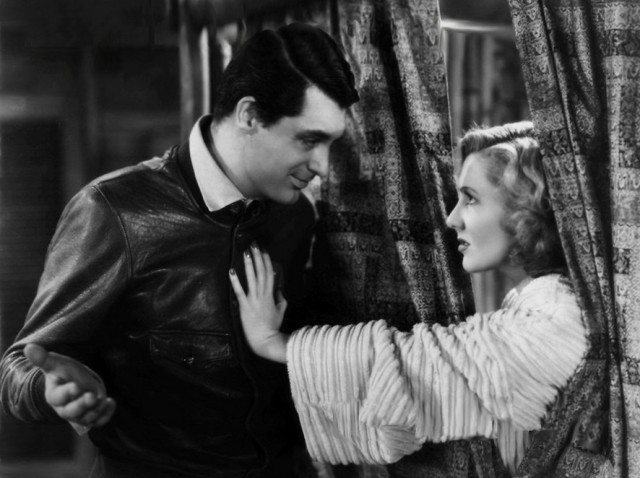 Hawks favored an improvisational style, and wanted Bonnie to be played in a subtly sexy way. Arthur refused, saying, “I can’t do that kind of stuff.” At the end of the shoot, Hawks offered the following statement to Arthur: “You are one of the few people I’ve worked with that I don’t think I’ve helped at all. Someday you can go see what I wanted to do because I’m going to do this character all over again.”

Five years later, Hawks returned home to find Arthur in his driveway, after she had seen To Have and Have Not. She confessed: “I wish I’d done what you’d asked me to do. If you ever make another picture with me, I’ll promise to do any goddamn thing you want to do. If a kid can come in and do that kind of stuff, I certainly could do it.” The kid to whom Arthur referred was none other than Lauren Bacall. Unfortunately, Hawks and Arthur would never collaborate again.

Arthur’s experience along Grant was far more enjoyable. “I loved sinking my head into Cary Grant’s chest,” she mused in a 1972 interview.

Interestingly, Judy, MacPherson’s wife, is portrayed by star-to-be Rita Hayworth, in her first major screen appearance. Hawks had initially cast Dorothy Comingore in the role of Judy, but studio head Harry Cohn had been grooming a young starlet for the role. With support from Cohn, Hawks granted Hayworth the screen test and ultimately chose her for the role, stating that she had “a face that the camera likes.” This would be a breakthrough role for Hayworth, who would appear on the cover of Look magazine after the film’s success. Comingore would later portray the role of Susan Alexander in Orson Welles’s Citizen Kane.

Finally, Hawks’s decision to cast Richard Barthelmess in the role of MacPherson was somewhat controversial. Barthelmess’s career had declined since the days of silent cinema, and he had also suffered a botched plastic surgery operation on the skin under his eyes. The failed procedure resulted in him having permanent X-shaped scars under both of his eyes. While Barthelmess wanted to wear heavy make-up to cover the scars, Hawks wanted to use them for his character. Hawks explained: “Those scars tell the story and are important to your character.” 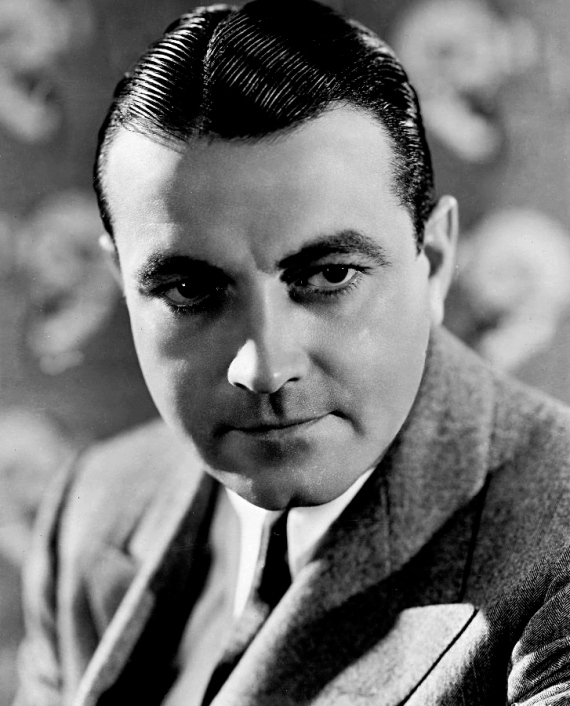 Only Angels Have Wings was the third-highest grossing film of 1939, which is no easy feat considering the worthy competition of other films in what was arguably the best year for Golden Age cinema. Hawks’s film goes on to be extremely popular with the aircraft enthusiasts of the golden age of aviation, while celebrating the rich legacy and sacrifices of fliers both past, present, and future.

“No looking ahead, no tomorrows, just today.” –Bonnie Lee, portrayed by Jean Arthur

As part of this blogathon’s theme, I recently co-authored an e-book, entitled Planes, Trains, and Automobiles. You may purchase your very own edition through Amazon. All proceeds are donated to film preservation. Check it out!