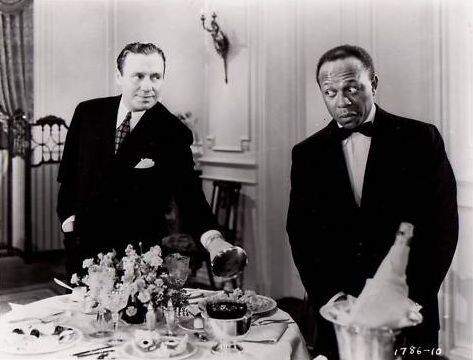 Jack Benny is remembered as one of the leading entertainers of the 20th century. His regular radio and television programs had an incredible influence on the sitcom genre.

Yet, if Benny’s program was important to comedy, it was significant in another major respect: this funnyman with the captivating and comical persona became an impactful catalyst for improving the treatment of African Americans during the Jim Crow era. In particular, Benny’s relationship with fellow cast member Eddie “Rochester” Anderson is both legendary and, for its time, revolutionary.

For most of his time on the air, Benny portrayed a miserly would-be musician surrounded by a vibrant cast of characters, including his real-life wife Mary Livingstone, rotund announcer Don Wilson, philandering bandleader Phil Harris, naive tenor Dennis Day, the ridiculously talented Mel Blanc (playing everything from Jack’s wheezing Maxwell automobile to the long-suffering violin teacher, Professor LeBlanc), and Rochester, his wisecracking chauffeur/valet/cleaning staff/everything else that Benny’s character could get him to do. 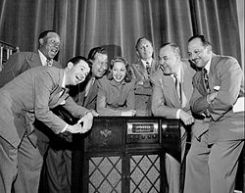 In reality, Benny was a humble man with a keen eye for talent. He possessed a love for both laughter and performing, coupled with a profound respect for music. Benny was actually an accomplished violinist (capable of playing far beyond the first position) but he held back his musical skills masterfully for the sake of good comedy. This decision allowed him to play with some of the most celebrated musicians of his day, including Isaac Stern, Liberace, and Gisele MacKenzie, to name a few, while providing some comedic flair.

Most importantly, Benny respectfully sought out real talent, while subtly fighting the racial prejudice of the time. The fact that Benny actually hired an African American performer to play the part of Rochester was groundbreaking in and of itself. Popular shows of the day (most notably Amos ‘n’ Andy) often featured white performers impersonating African Americans. A Black performer working alongside whites was shocking enough to audiences of the day, but even more surreal was the fact that Rochester invariably got the last word–and could always poke fun at the shortcomings or miserly persona of his boss.

According to veteran Benny writer Milt Josefsberg, Rochester’s appearances on The Jack Benny Program were enjoyed by a great majority of his own race and resented by Southerners who somehow never got around to reading the Emancipation Proclamation. Over the years, Benny and Anderson strayed further away from stereotypes and molded a character that would change the way people thought about that race.

Anderson was born on September 18th, 1905, in Oakland, California, into a show business family. His father was a minstrel performer, while his mother was a circus tightrope walker.

Anderson earned his trademark “foghorn” voice while selling newspapers as a young boy. It was a distinctive sound that was well-suited to a career in entertainment. He entered show business at the age of fourteen, primarily singing and dancing with his brother, Cornelius. 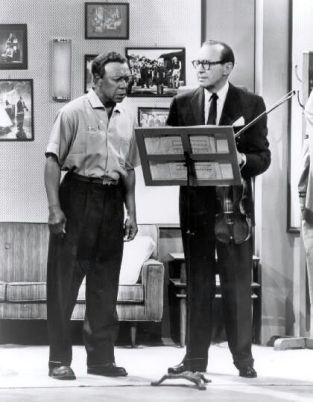 As the Great Depression gave way to economic recovery, Anderson relocated to Hollywood, juggling some bit movie parts with theater, nightclub, and radio work. Anderson’s first notable films were Three Men on a Horse (1935) and Show Boat (1936). He was a firmly established stage and movie performer by 1937 when he first appeared on The Jack Benny Program as a Pullman car porter.

Perhaps no American has been closely associated with a role over a longer period of time than Anderson was with Rochester. Though it was only intended to be a one-show deal, Anderson struck such a chord with audiences that he was offered the permanent role of Benny’s valet, Rochester Van Jones.

In the early days of The Jack Benny Program, Rochester did say many stereotypical jokes that probably offended his own people. In later episodes, Anderson’s quips against his boss became a focal point within the show, with the other characters also chiding Benny in the wake of Rochester’s witty remarks. One night on the show, Rochester was going to a party. As he left, Benny said, “Rochester, be sure to come home at a reasonable hour.” Rochester then politely responded by saying, “Yes, sir. Your reasonable or my reasonable?”

With Benny’s enthusiastic support, Rochester became a crafty character who could be brutally blunt with his boss without repercussion. In fact, all of the characters on the show mocked Benny on the show, and Rochester was granted the same privilege. He had even more of a right to mock his boss because, as a domestic servant, the character of Rochester had first-hand knowledge of his boss’ personal habits, especially Benny’s image as a cheapskate.

The writers seized every opportunity for a jibe or fast quip about Benny’s stingy ways, but the laughs in these exchanges were always at Benny’s expense; Rochester might have bemoaned the poverty-level wages he received, but he was never criticized or diminished because of his race; rather, he was on a level playing field with the other actors. Stepping away from racial stereotypes allowed Rochester to become one of the most beloved characters in the show.

The Anderson-Benny team was so popular that they also appeared together in multiple films, most famously in 1940’s Buck Benny Rides Again. By then, Anderson was so closely identified with the character of Rochester that he changed his name to Eddie Rochester Anderson. Anderson began building up major film credits, appearing in over sixty motion pictures, including Gone with the Wind (1939), in which he appeared as Scarlett’s coachman, Uncle Peter.

Anderson had become an established part of The Jack Benny Program when the U.S. entered World War II in 1941. By then, much of Benny’s audience was cast overseas or away from home. Hollywood packed its bags to entertain troops all over the world with live performances and USO shows. Radio performers also boosted soldiers’ morale by staging their broadcasts in front of gathered troops, allowing soldiers could watch their favorite players perform live while everyone back home could tune in to the usual broadcast. Radio, in this case, was a great equalizer, and unified families that had been scattered during the war by providing them with entertainment.

The radio may have been an equalizer in one respect, but true equality was still in the distance — and a white performer traveling with an African American co-star posed a challenge for both Anderson and Benny. Even as the U.S. fought fascism, segregation was still the law in parts of the country. Benny was often faced with the prospect of performing without Rochester in the South. To Benny’s surprise, however, people would complain about Rochester’s absence, proving that Anderson was an integral part of the show and a favorite character for many people.

Yet when the show was over, racist audience members saw him as nothing more than his race, and undeserving of equal rights. Years after the War, Benny remembered playing at a camp in Abadan, Iran, when he encountered a white sergeant. Disheartened that Anderson was not in the show, the sergeant proclaimed, “Why, sir, ah tell you ah’d walk ten miles to see that Rochester.”

Benny asked if the sergeant would ever want to sit at the same table as Anderson. “His expression got nasty,” Benny recalled, as the sergeant explained, “Well, sir, ah come from a part of the country where we don’t sit down with nigras.”

“I thought so, young man,” Benny replied, “and that’s why I didn’t bring Rochester on this trip. I didn’t want him to be embarrassed and humiliated by ignorant folks like you. You say you love Rochester. You’ll walk ten miles to see him perform. But you won’t sit down at the same table and drink a glass of Coca-Cola with him. You make me sick.”

As civil rights became a more prominent issue, many less-enlightened listeners begun to take umbrage over the positive portrayal of Rochester. In fact, Anderson and Benny had become a comedy team; on the air, Rochester was treated as Benny’s equal — sometimes Rochester sounded like the boss and Benny the employee. In one episode, Benny asked Rochester to answer the door; Rochester replied, “Boss, you’re nearer to it than I am.”

During a time when almost all other African Americans appearing in any of the media were caricatures rather than characters, this relationship was the cause of complaints from less enlightened listeners.

Benny had no interest in getting laughs that hurt an individual or an ethnic group. He wanted to focus on humor at his own expense and certainly did not want to belittle Anderson or African Americans overall.

“I never felt and I do not feel today that Rochester was socially harmful,” Benny said at one point. “You don’t hate a race when you’re laughing at it. You couldn’t hate Rochester. You loved Rochester.”

Columnist Walter Winchell often slammed comics who got laughs at the expense of minority groups; however, he heaped praise upon Benny and his beloved Rochester, noting that “[a]lthough Benny used Rochester and members of almost all racial extractions, he treated them with dignity, love, and affection.”

Benny was very protective of Anderson, refusing to play in theaters or stay in hotels that discriminated against his co-star. It was a profound message, coming from a top comedian who had high regard for his friend. 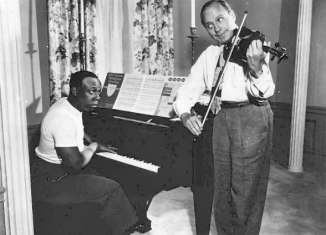 Benny claimed he often received letters from racists who felt the Benny-Rochester relationship was “too close.” Benny finally drafted a form letter that read in part, “Why are you threatened by two men who have real regard and affection for one another? It is a shame that some people are still fighting the Civil War after nearly one hundred years.”

As part of his miserly comic image, Benny created a radio character that treated all of his supporting characters in an equally miserable fashion. By allowing them to make fun of his character, Benny gave the supporting cast, including Rochester, the upper hand; in the process, he made Rochester an equal to the character Benny had created. A certain progressivism was needed in order to accept that fact; once people embraced it, they could fully appreciate Benny’s brand of comedy and Rochester’s role in it. 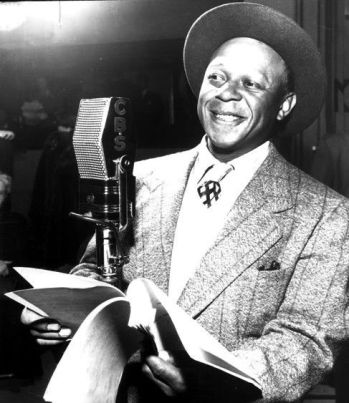 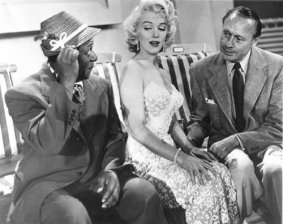 That relationship was especially important because African Americans — including such incredible talents as Hattie McDaniel and Lena Horne — were limited in terms of the roles they could play. Although she won an Oscar for Gone with the Wind (1939), McDaniel was limited to the “mammy” persona of a motherly maid, always caring for white families and white children, but never showing her own. Horne, on the other hand, was a gifted singer, but only achieved success when MGM “whitened” her image with heavy makeup; even then, she was limited to brief appearances in films.

In that environment, a successful African American mingling with a white cast was still an unfathomable taboo. Benny burst through racial barriers with Rochester and helped pave the way for other Black individuals who wanted to perform on television or radio.

Anderson played Rochester for many years on radio and worked on Benny’s television show well into the 1960s. He was the first African American actor to have a regular part on a radio show, and a clever role at that; thanks to Anderson’s performance, his race was rightfully portrayed as intelligent and independent. His success certainly helped to pave the way for generations of performers to come.

This article originally appeared in the Winter 2020 issue of Nostalgia Digest. Order a copy or subscribe to the magazine here.