Blondie: From Strip to Screen

In 1930, Comic Artist Chic Young sat down to work, his mind ablaze with the colorful chaos that can only accompany a good idea. Known for his lighthearted comics about fickle flappers, he sought out to sketch a new plotline about yet another carefree flapper.

Panel after panel, Young gradually penned one of the most memorable characters in comic, television, and film history. She is best introduced through one loud, exasperating cry:

On September 8, 1930, anyone who cracked open the “funnies” was introduced to Blondie Boopadoop, a gorgeous flapper named after the “boop boop be doo” catchphrase in the song, “I Wanna Be Loved By You.” Always frequenting the dance halls, the slender, golden-haired heroine was pursued by a long line of suitors—one of them being the wealthy albeit bumbling playboy, Dagwood Bumstead.

Bumstead, son of a railroad tycoon and heir to the Bumstead Locomotive fortune, however, faced frequent opposition from his upper-class parents regarding his pursuit of such an impulsive woman. His parents would instead nudge him towards other more eligible women who would match him in social class, while also strategically contributing a hefty sum to the Bumstead fortune. Nevertheless, an enamored Dagwood continued to pursue Blondie for three years.

However, with the despair of the Great Depression becoming more evident each day, audiences no longer felt as much enjoyment from a breezy flapper and the consequences of her beau’s millions. To avoid any more papers from dropping the strip, Young decided to revamp his tale through one ever-powerful, familiar, and sunny force: love.

Dagwood and Blondie fell deeply in love and embarked on a bumpy engagement. The Bumsteads were not amused and did just about everything they could to prevent the couple from continuing their relationship. But Dagwood persevered—to the point of surviving a 28 day, 7 hour, 8 minute, and 22 second hunger strike—and Blondie and Dagwood were married on February 17, 1933.

As a result, Dagwood was disinherited for marrying against their wishes and unable to pay for a honeymoon due to a bounced check. The newlywed Bumsteads instead settled down in the suburbs of Joplin, Missouri, to a more humble lifestyle—much more relatable to the audiences of the day. Blondie and Dagwood began to face more realistic situations, such as maintaining a budget and raising a family.

It was at this moment that the scatterbrained Blondie became the more practical person of the couple, while Dagwood’s actions and mannerisms created much of the humor in the strip. Rather than having him enjoy the extravagance of his former lifestyle, Dagwood’s new beloved pursuits in life include spending time with his wife and children, stomaching gigantic sandwiches, watching a gripping game of football, and taking the occasional lengthy nap on the family couch.

Having to pave his way in the world on his own, Dagwood took a job at the J. C. Dithers Construction Company, headed by his domineering boss, Julius Caesar Dithers. Although Dagwood aims to be an ideal employee, his knack for bad luck often impedes his wishes to stay out of trouble. Running gags in the strip include Dagwood fumbling a task, sleeping on the job, and insisting on a raise. However, the most frequent and familiar of the jokes involves Dagwood running—quite literally, sprinting—late to work. He never ceasing his mad dash for anyone or anything in his path—not even the mailman.

The Bumstead family grew with the 1934 birth of a son named Alexander, also known as “Baby Dumpling,” and in 1941, a daughter named Cookie. The Bumsteads share their home with their loyal dog, Daisy, and her litter of five pups.

Young’s comic strip grew increasingly more lovable and popular over the years and leapt subsequently from the newspaper page to the big screen. Young and his family moved to Hollywood, where Columbia Pictures was slated to shoot a succession of B-movies based upon the Blondie comic strip.

Lake’s career was declining at the time and he freelanced at a variety of studios before signing on with Columbia to play the part of Dagwood. Actress Shirley Deane was originally chosen to play the role of Blondie, but backed out of the project due to an illness. Dealing with a seemingly peaking career, a struggling Singleton jumped at the chance to play the leading lady. Singleton bleached her dark tresses blond and hurriedly joined the production. 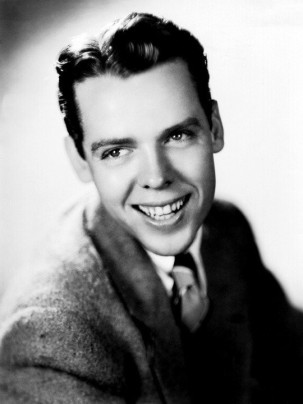 Columbia Pictures would release 28 Blondie films in total for the next 12 years, with the delightful Lake and Singleton reprising their roles for the duration of the series, along with child actor Larry Simms playing their son. Singleton’s husband, Robert Sparks, would produce a dozen of the Blondie films.

The creators of the film franchise wanted the Blondie movies to remain as true to the comic strip as possible. One of the best ways to achieve this goal was to retain the iconic gags from the strip. Almost every film begins with Dagwood running late to work and crashing into the ill-fated mailman, leaving behind a prostrate postal worker and a scatter of letters all about the lawn. Similarly, Dagwood’s hefty sandwiches also appear onscreen, although he seldom receives the opportunity to take a bite.

The Blondie series also boasts a long list of guest stars, in addition to character actor Jonathan Hale fulfilling the role of Mr. Dithers. Some guest stars include an up-and-coming Rita Hayworth as Dagwood’s old girlfriend in Blondie on a Budget (1940), Glenn Ford in Blondie Plays Cupid (1940), Lloyd Bridges in Blondie Goes to College (1942), character actors Hans Conried and Mary Wickes in Blondie’s Blessed Event (1942), Shemp Howard in Blondie Knows Best (1946), Anita Louise in Blondie’s Big Moment (1947), Hugh Herbert in Blondie in the Dough (1947), and William Frawley in both Blondie in Society (1941) and Blondie’s Anniversary (1947), prior to taking on the role of Fred Mertz. 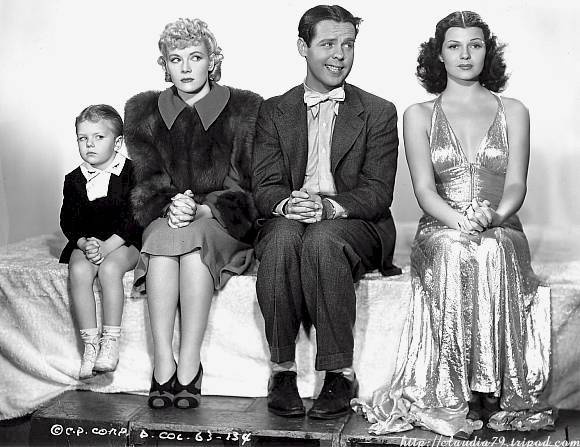 Not long after the release of the first Blondie film, the series also enjoyed a stint on the radio. Initially slated as a 1939 summer replacement for the Eddie Cantor Show, Lake and Singleton continued to portray the comical Bumsteads on both radio and film. Cantor’s series did not return, and CBS continued to broadcast Blondie for the majority of the series.

Towards the end of the radio series, the role of Blondie was passed to several other actresses, including Ann Rutherford, Florence Lake (Lake’s sister), Patricia Van Cleeve (Lake’s wife, illegitimate daughter of actress Marion Davies and newspaper tycoon William Randolph Hearst), and Alice White. Both the Blondie films and radio series ended in 1950.

The Blondie series was also adapted into a television show twice, but neither attempt fared well. The first television series was shown on NBC in 1957, with Lake reprising his role as Dagwood and Pamela Britton as Blondie. The series lasted for a total of eight months and 26 episodes.

Penny Singleton leaning on Arthur Lake in a scene from the film ‘Blondie Takes A Vacation’, 1939. (Photo by Columbia Pictures/Getty Images) 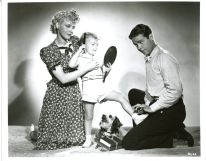 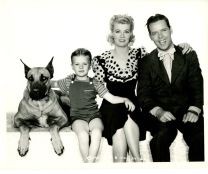 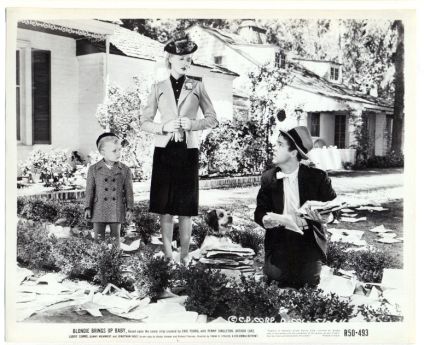 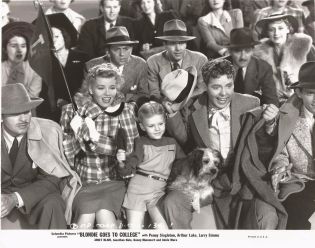 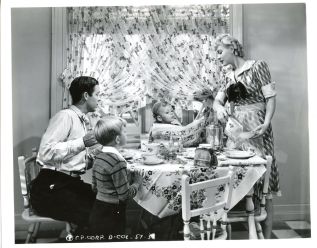 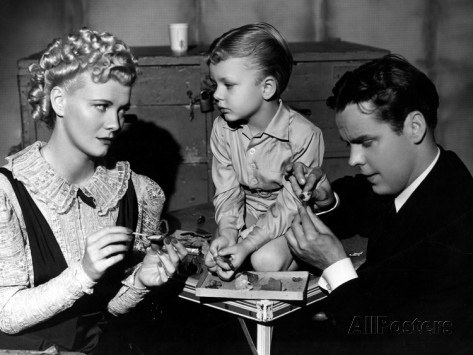 The second attempt occurred in 1968 on CBS, with Will Hutchins and Patricia Harty in the lead roles, and Jim Backus in the role of Mr. Dithers. This series only lasted a mere four months. Neither pairing seemed to have the initial magic, timing, and chemistry that Lake and Singleton so easily projected. They simply were Blondie and Dagwood. 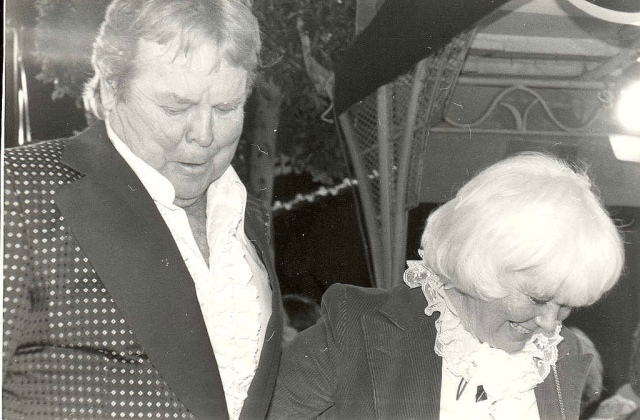 While the adventures of Blondie and Dagwood were being portrayed on film, radio, and television, only one method of storytelling has remained constant and popular through it all—the comic strip.

Chic Young’s son, Dean Young, has been head writer of the comic strip since his father’s death in 1973. Following the formulas that his father had already put into place, Dean Young has been depicting the Bumsteads’ love, joy, and humor for almost four decades.

The strip has, however, modernized over the years particularly terms of dress and technology to stay all the more relatable to today’s audiences. Blondie often wears slacks and is no longer only a housewife, since launching a catering business with her neighbor. Dithers’ Construction Company now boasts computers with flat panel monitors. Some characters are even seen referring to Facebook, Twitter, email, text messaging, etc.

But the story is still the same at heart. Dagwood is still late to work, still makes a mean sandwich, and still thinks the world of Blondie. 81 years after Chic Young’s stroke of inspiration, Blondie and Dagwood continue their story in over 2,300 newspapers circulated all over the world, have been translated into 35 languages in 55 countries, and are read by an estimated 280 million loyal readers each day.

In the end, Blondie and Dagwood are truly ageless in their appeal to a broad audience that already spans several generations. Their animated antics fascinate children, their unique ways of coping with daily situations lure in adults, and their constant demonstrations of love and humor, as well as the laughter they inevitably provide, charm just about any soul. Their ability to face each situation with a smile, hold only love in their hearts, and deliver mirth and merriment to millions makes them truly timeless. 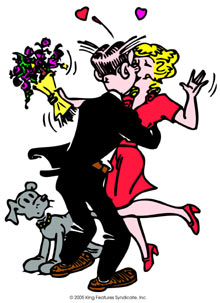 5 Responses to Blondie: From Strip to Screen