Posted on September 16, 2019 by Annette Bochenek

“When I was a little girl, I loved Rock Island. Now that I’m grown, I hope Rock Island likes me.” –June Haver

While many think of MGM studios when reflecting upon some of the best musical films made during the Golden Age, 20th Century Fox certainly had its fair share of musical stars. Among the many Fox actresses was June Haver, who was intended to become the next Betty Grable. Though not necessarily synonymous with Grable, she led a successful career with personal interests that differed from Grable’s.

Beverly June Stovenour was born in Rock Island, Illinois, on June 10, 1926, and was the middle child, with two sisters. Her parents divorced when she was a child and she was adopted by her stepfather, Bert Haver. Haver took on his name as her family prepared to relocate.

Haver’s family moved to Cincinnati, Ohio, where she made her stage debut at the age of six in a local production of Midnight in a Toyshop. By age seven, she entered and won a contest hosted by the Cincinnati Conservatory of Music. When she turned ten, she started performing for crooner Rudy Vallee, winning musical and impersonation contests.

Instead, Haver became a noteworthy child star on the radio, singing on the WHBF local radio station, and working regularly as a band singer during her teen years. She performed with the Ted Fio Rito Orchestra, in addition to working for bandleaders Dick Jurgens and Freddy Martin. All the while, she was a parishioner at St. Mary’s Catholic Church in Rock Island. 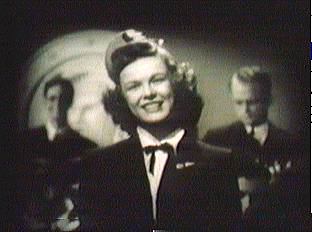 While touring with these bands, Haver and her mother arrived in California. By the summer of 1942, with Haver aged 16 years, they moved to Hollywood. There, Haver finished high school and participated in plays.

Haver was discovered by a scout from Fox during a school production and was signed to a contract with the studio. She made her film debut in an uncredited role in The Gang’s All Here (1943) as a hat-check girl but was dropped because studio executives opined that she looked too youthful. However, she was signed once again, and her costume and hairstyle were adapted to make her appear older.

The studio began to fashion Haver into a glamorous potential stand-in for Betty Grable. Haver carried out a supporting role in Home in Indiana (1944) and soon replaced Faye in the Technicolor musical Irish Eyes Are Smiling (1944). She would also co-star with her future husband, Fred MacMurray, in Where Do We Go from Here? (1945). 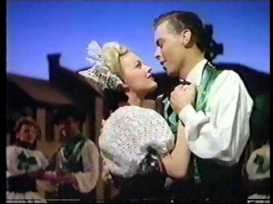 At only 5’2″, Haver found herself being thought of as the “Pocket Grable,” and co-starred with Grable in The Dolly Sisters (1945). She received top billing in other musicals, including Wake Up and Dream (1946), Three Little Girls in Blue (1946) alongside Vera Ellen and Vivian Blaine, and I Wonder Who’s Kissing Her Now (1947). Haver returned to her home state for the premiere of The Dolly Sisters at the Chicago Theatre. 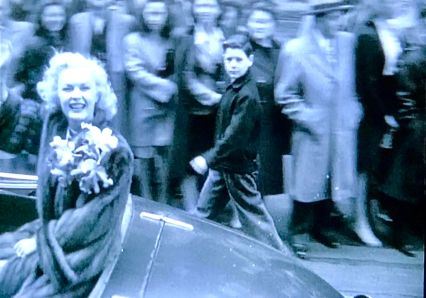 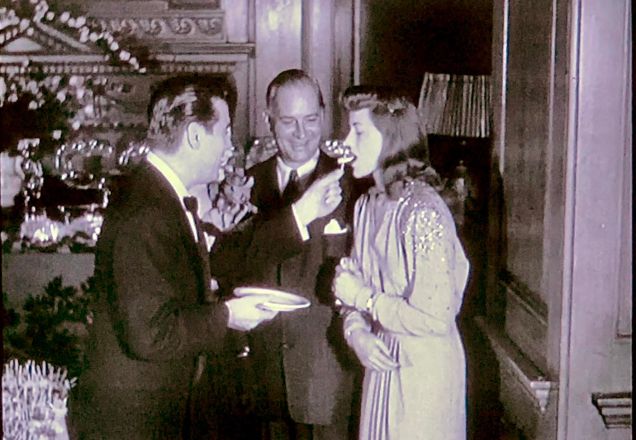 Haver made a highly publicized visit to her Rock Island, Illinois, hometown. The festivities included a parade in her honor and tributes to Haver at the local Chamber of Commerce. October 31, 1946, was dubbed “June Haver Day” in Rock Island, during which she was given a golden key to the city at the Fort Armstrong Hotel and signed autographs for fans.

As part of her visit, she was also named Mayor for the day. Across from the Fort Armstrong Hotel, Haver was a guest at the Fort Theatre. The Fort Theatre recreated a Grauman-esque tradition and ceremoniously had Haver cast her feet in cement. She appeared in a white strapless evening gown and white gloves, with orchids from the Chamber of Commerce attached to her ermine stole, holding onto the mayor as she stepped in the wet cement with her shoes on. 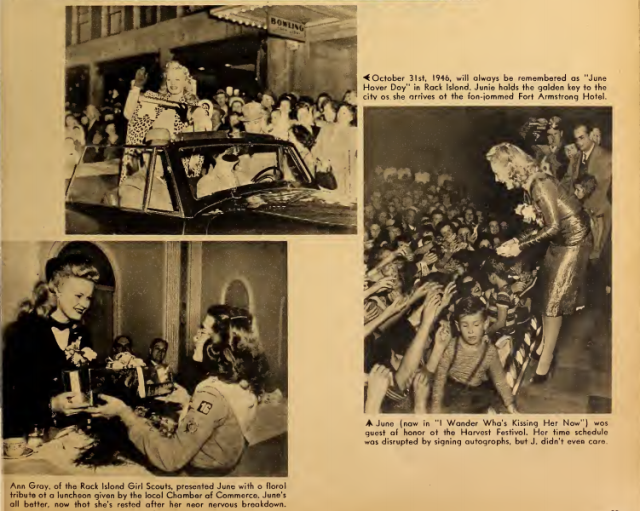 The next day, Haver traveled to Moline, Illinois, to attend a football game between Rock Island and Moline High Schools. Not only was she a special guest, but she helped drive the train. Just before the game, Haver was on the receiving end of some autographs for a change. She was gifted with a football signed by the Rock Island team. Her visit would be mentioned several times in the Rock Island High School Yearbook.

In 1947, Haver married trumpet player James Zito, whom she met at 15 when touring with Fio Rito’s orchestra. Though they lost contact when Haver moved from Illinois to Beverly Hills, California, they started dating when Haver visited her Illinois hometown in 1946. She filed for divorce less than a year after eloping with Zito, feeling she had not really known him and that he was basically a stranger to her. Since she was a devout Catholic, she tried to make the marriage work but ultimately tried to overcome her unhappiness by turning to the church.

Haver was known for her roles in optimistic musicals but also showed off her comedic talent in Scudda Hoo! Scudda Hay! (1948). Additionally, she starred as Marilyn Miller in Look for the Silver Lining (1949) alongside Ray Bolger. 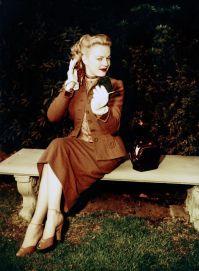 After divorcing Zito, Haver dated Dr. John L. Duzik, whom she knew prior to her marriage with Zito. Though they planned on marrying, Duzik died from surgery complications in 1949.

While Haver’s star continued to shine, she remained close to her family throughout her life. Her sisters, Evelyn and Dorothy, followed her to Hollywood and worked as her stand-ins. Her mother, Marie, was her personal secretary.

In 1949, Haver also built an apartment house in Westwood, California, after learning that her sister could not get an apartment because she had a child and a puppy. The grounds were fenced in for the child’s safety and each apartment had closets with miniature hangers for children’s clothes. Haver refused to rent the apartment to anyone without children. 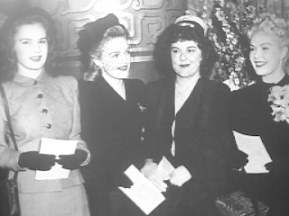 As Haver continued to appear in more musicals, she also found herself teamed with Marilyn Monroe, the latest studio bombshell, in Love Nest (1951). While Haver received top billing, the publicity centered around Monroe.

After Duzik’s death, Haver grew disenchanted with Hollywood. In February 1953, she became a postulate nun as part of the Sisters of Charity of Leavenworth in Leavenworth, Kansas. She remained there only until October of that year, due to poor health.

Haver returned to California and reunited with MacMurray, soon developing a romance. They married on June 28, 1954. After they married, Haver expressed a desire to adopt a little girl, but MacMurray—18 years her senior—refused because he had already been a father. Nevertheless, he eventually agreed and they adopted twin daughters. The couple remained together until MacMurray’s passing in 1991.

After Haver married MacMurray, she essentially retired from acting, aside from occasional television appearances. Her final film appearance would be The Girl Next Door (1953). Thinking about the future and her legacy, Haver joined the Academy of Motion Picture Arts and Science at age 75, thanks to the urging of her friends and fellow actresses Ann Miller and Ann Rutherford.

Haver passed away on July 4, 2005, from respiratory failure at age 79. She is interred alongside MacMurray at Holy Cross Cemetery in Culver City, California.

Today, there are traces of Haver’s legacy in Illinois, particularly in her hometown.

According to the 1930 census, Haver’s family lived at 8046 Ingleside Ave., in Chicago, IL. Here is a shot of the property today: 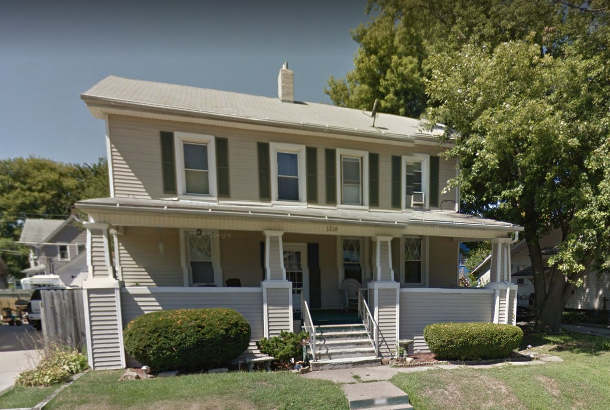 St. Mary’s Church, where Haver worshiped during her time in her hometown, exists at 2208 4th Ave., Rock Island, Illinois. 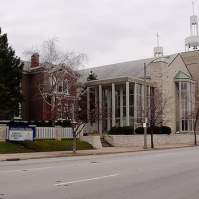 The Fort Armstrong Hotel, where she arrived and received a key to the city, is a historic structure. Though no longer a hotel, it is an assisted living facility at 1900 3rd Ave., Rock Island, Illinois. 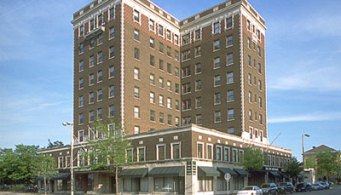 Although the Fort Theatre no longer exists, her cement footprints are still safe and secure. They are now situated at the Circa ’21 Dinner Playhouse located at 1828 3rd Ave., Rock Island, Illinois. 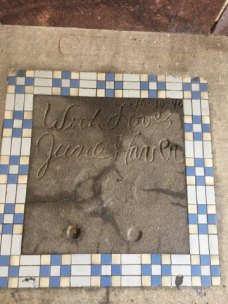 To this day, the Academy Film Archive houses the Fred MacMurray-June Haver Collection, complemented by their papers at the Academy’s Margaret Herrick Library. It is located at 333 S. La Cienega Blvd., Beverly Hills, California.

Haver has a star on the Hollywood Walk of Fame for her work in motion pictures at 1777 Vine St., Los Angeles, California.

Whether you enjoy Haver’s films or are able to pass through her hometown, it is heartening to see that she is remembered and echoes of her legacy remain.