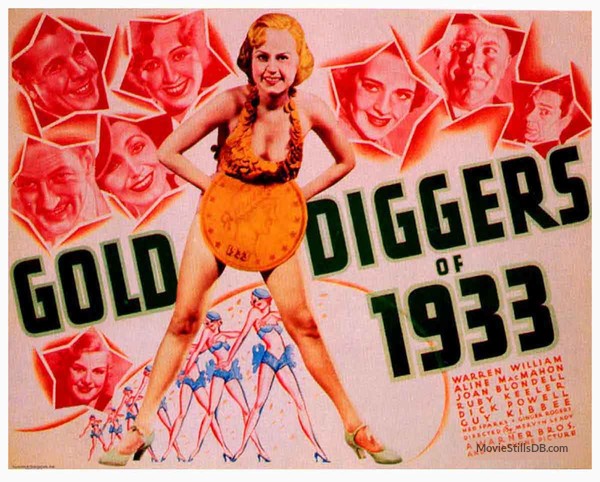 Of the many Gold Digger films, one of the most celebrated iterations of this series is Gold Diggers of 1933 (1933). This film showcases many characteristics that immediately come to mind when thinking of the Gold Digger films: Busby Berkeley choreography, Depression Era tunes, and a Warner Brothers cast that was part of the Pre-Code Era core of players.

At this point, the Gold Digger stories were already brought to the stage, to the silent screen, and then into the Sound Era. Gold Diggers of 1933 expands upon Avery Hopwood’s play, with revisions by James Seymour and Erwin S. Gelsey, in addition to dialogue by David Beohm and Ben Markson. The film was directed by Mervyn LeRoy and called upon Busby Berkeley for direction of the musical sequences. The film was produced by Robert Lord and Jack L. Warner. Initially slated to be called High Life as a feature for George Brent, the film was renamed and Warren William was cast in the role intended for Brent.

In this version of the Gold Digger story, the plot focuses upon four aspiring actresses: Polly, Carol, Trixie, and Fay. Each of the women have different personalities, aside from sharing the goal of becoming artistically and financially successful in the face of the Depression. Polly is an ingenue, Carol carries out dramatic torch songs, Trixie is constantly wisecracking, while Fay delights in glamour. The girls lose their jobs when the current production in which they are working is forced to close due to unpaid bills. 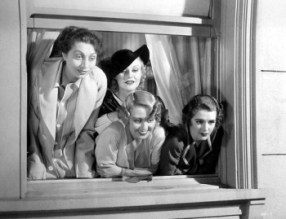 Producer Barney Hopkins laments the fact that he has all the facets needed to execute the show of a lifetime, save for funding. Polly’s boyfriend, Brad, a singer and songwriter, offers to back the show with $15,000. Brad’s funds come through but the girls eye him with suspicion regarding how he received the money, especially since he is guarded about his past.

When the show’s male lead falls ill, Brad carries out his role. The positive publicity that the production and his performance garner attracts the attention of his brother and family lawyer, who are now well aware of what Brad has been up to and think that he has surely been seduced by a gold-digging chorine. The chaos and comedy of mistaken identities ensue, with glamorous departures from the story being made to showcase Berkeley’s iconic large-scale musical numbers. 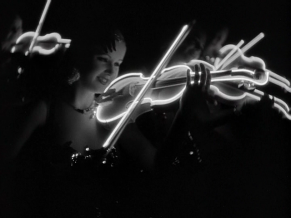 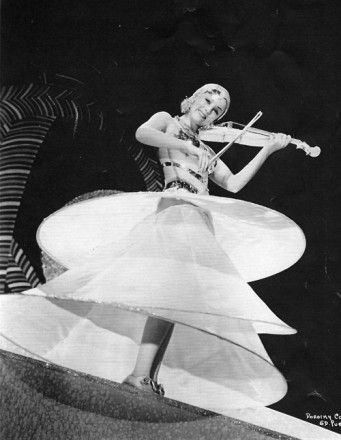 The cast for this film is as follows:

Several actors from this cast would reappear in future Gold Digger films, in addition to working with one another in other Warner Brothers productions of the day.

While not carrying out integral character roles, other notable actors do appear in more minor capacities, including Sterling Holloway and Hobart Cavanaugh. In fact, it is Berkeley himself who shouts, “Everybody on stage for the ‘Forgotten Man’ number!” near the end of the film. 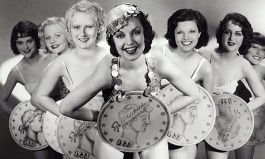 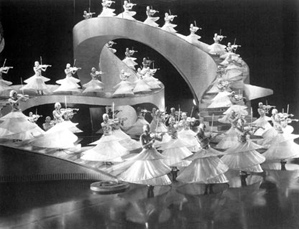 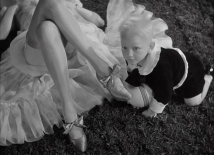 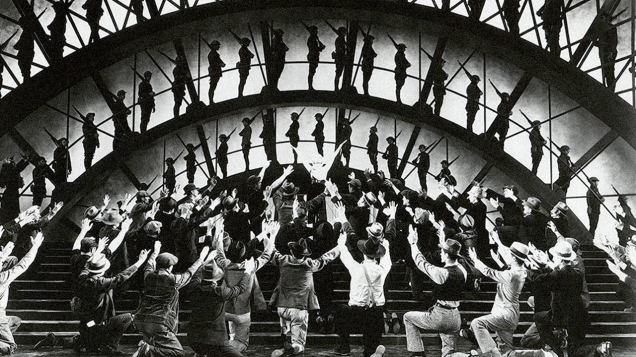 Gold Diggers of 1933 is one of many films that features a fabulous array of songs from Harry Warren and Al Dubin. Berkeley’s choreography accentuates their songwriting skills and brings their compositions to life with dreamlike and creative execution on a massive scale. Interestingly, the film makes a brief nod to the songwriting duo, having the character of Hopkins say, “Cancel my contract with Warren and Dubin!” once he hears Brad play.

Warren and Dubin wrote all of the songs appearing in this film, including the Depression Era classic, “We’re in the Money,” to which Ginger Rogers attaches a verse in Pig Latin. During rehearsals of the number, Rogers was jokingly singing the song in Pig Latin. Studio executive Darryl F. Zanuck overheard her, and suggested she perform it for the film.

Dick Powell and Ruby Keeler romance to the wry “Pettin’ in the Park” number, which evolves into a tap routine and comic number about a baby who escapes from a stroller. Though this number was initially meant to conclude the film, it actually appears much earlier in the story. Nonetheless, in the final backstage scene, Keeler and the chorus girls are all wearing costumes for “Pettin’ in the Park.”

“The Shadow Waltz” is the key escapist number in the film, sung by Powell and Keeler but leading into an imaginative routine that features many female violinists with neon-tubed violins that glow in the dark. According to some sources, the stage for musical numbers such as this one was lifted 40 feet in order to achieve sweeping crane shots. To complicate matters, the sequence was being filmed on March 10, 1933–the date on which the Long Beach earthquake hit southern California, measuring 6.4 on the Richter scale. The earthquake caused a blackout on the set and short-circuited some of the neon-tubed violins. Berkeley was almost thrown from a camera boom and dangled by one hand until he could pull himself back up. Since many of the chorus girls in the dance number were on a high scaffold, Berkeley yelled for them to sit down and wait until the stage hands and technicians could open the sound stage doors and let in some light. According to cast member Dorothy Coonan Wellman, she and the other dancers in the Shadow Waltz number were constantly getting little electric shocks from the wiring that was used to illuminate their violins throughout the filming of the sequence. One of the neon-outlined violins used in the Shadow Waltz number is on display in the Smithsonian’s National Museum of American History in Washington, D.C. 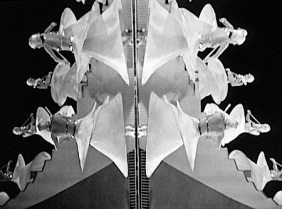 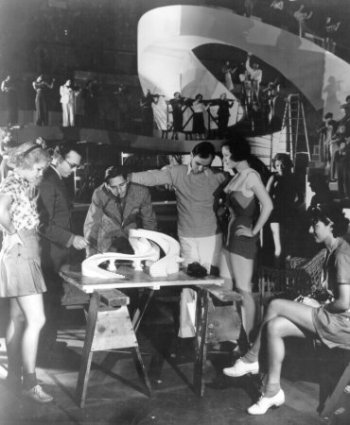 The climactic number of the film is “Remember My Forgotten Man,” performed by Joan Blondell, with a vocal solo by Etta Moten. The set is influenced heavily by German Expressionism, in addition to Berkeley being inspired by the May 1932 war veterans’ march in Washington, D.C. The scale and impact of the number was so moving to Warner and Zanuck that this song became the concluding number of the film as opposed to “Pettin’ in the Park.”

Rogers had an additional song in the film called, “I’ve Got to Sing a Torch Song,” but it was cut from the film. Instead, her rendition is replaced by Powell’s version, which appears close to the beginning of the film. Rogers’ character initially sang the song atop a white piano in a nightclub, which she can be spotted briefly in a long shot of the orchestra. Her prerecording still exists. 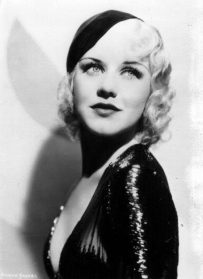 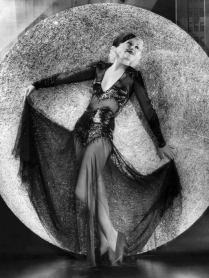 The production of this film was also impacted by censorship, causing it to be one of the first American films made with alternative footage to evade state censorship issues. In particular, the “Pettin’ in the Park” and “We’re in the Money” numbers were seen as lewd by censorship boards. As a result, studios would craft varying versions of scenes that could be censored. Once a film was edited, the tamer versions were labeled and distributed by district to appease state censorship requirements in different locales. One example of this is the romance between William’s character and Blondell’s. In the censored version, their relationship is resolved after “Remember My Forgotten Man,” while in the uncensored version, the film simply ends with the number and their relationship unresolved.

Gold Diggers of 1933 proved to be a major success for Warner Brothers. The film was the second most popular movie at the US box office in 1933 and was nominated for an Oscar for Best Sound Recording by the film’s sound editor, Nathan Levinson. Warner Brothers would go on to continue the series, continuing collaborations with Warren and Dubin, Berkeley, and many of the cast members who appeared in this film.

Read my full series on the Gold Digger films here: