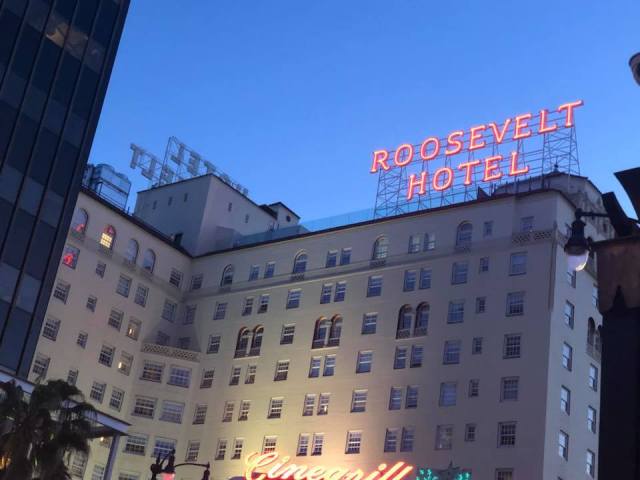 Once I made my way to the Los Angeles area again, I spent my morning doing some sightseeing at Hillside Memorial Park, Holy Cross Cemetery, and Hollywood Boulevard until it was time to check in to my Airbnb and start enjoying some pre-festival events. Excited beyond measure at attending my first-ever TCM Film Festival, the pre-festival events of the evening included a media reception and a social media mixer at the Hollywood Roosevelt Hotel upon registration. While there were only two pre-festival events on my agenda that evening, they were a wonderful way to start off the festival and start meeting and mingling with fellow attendees and TCM talents.

At the Hollywood Roosevelt Hotel, I checked in to the media reception and picked up my media credentials. There, I received my media credential badge along with a lovely bag filled with some fun TCM-related gifts. As I unpacked the gift bag later that evening, I was thrilled to see a copy of Mark A. Viera’s Forbidden Hollywood: When Sin Ruled the Movies included in the set, along with a bottle of TCM’s 10th Film Festival Anniversary wine, this year’s TCM pin, a program guide, and a wireless charger.

The media reception was housed at Club TCM within the Hollywood Roosevelt Hotel and was open to individuals with media credentials. Club TCM is actually the hotel’s Blossom Room, which boasts the honor of having hosted the first Academy Awards ceremony in 1929. Jennifer Dorian, General Manager at Turner Classic Movies, offered an enthusiastic opening address to start off the festivities. As I was enjoying her speech and our opening toast, I realized I was standing right behind several TCM hosts, including Ben Mankiewicz, Alicia Malone, Eddie Muller, and Dave Karger. I had met Ben before when I introduced a film as part of a 2015 round of Fan Favorites and when I enjoyed being on the first public tour of TCM’s studio. While I was delighted to reconnect with Mankiewicz, I was also eager to meet the other TCM hosts as I had not been able to get to know them before.

Club TCM itself was gorgeously decorated, as it functioned as “home base” for the festival and panel discussions throughout the festival. In addition to featuring a lounge area, lovely wall art, and a bar, Club TCM also had some interesting movie costumes and memorabilia on display. My favorite costume display piece happened to be Olivia de Havilland’s wedding dress from They Died with their Boots On (1941). I enjoyed strolling past the costume exhibits while enjoying TCM’s Marx Brothers white wine. 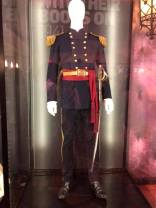 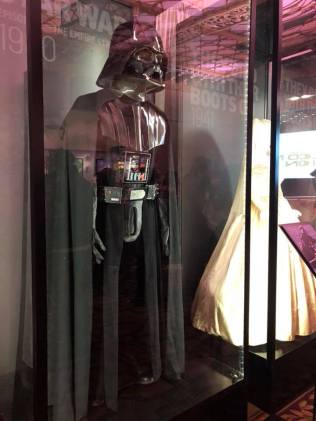 I enjoyed chatting with Mankiewicz about our last encounter and my doctoral work in archives and film preservation, especially lauding TCM’s fairly recent airing of King of Jazz (1930) and the amazing feat of piecing the film together and restoring it. Afterwards, I got to meet one of my idols–Leonard Maltin–whom I had seen in Chicago several years ago as part of TCM’s Road to Hollywood event. At the Chicago event, he interviewed Mitzi Gaynor prior to a screening of South Pacific (1958) and we reminisced about that fun interview. 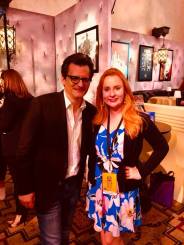 I was also happy to meet both Eddie Muller and Alicia Malone at the reception. I know of Muller from a more local standpoint as he helps host part of Noir City Chicago but I unfortunately had not been able to attend the screenings he had hosted. Muller was very kind as we spoke about the upcoming round of Noir City screenings and I look forward to seeing him later this year in Chicago. Malone was a delight to speak with, as well, and we shared an animated conversation about Gentlemen Prefer Blondes (1953), which was to be one of the opening films of the festival. Her enthusiasm for the film and its characters made me all the more excited to dive into her recent publication, The Female Gaze: Essential Movies Made by Women.

After I got a chance to meet with some of the hosts, I noticed that Dorian was also taking time to get to know festival attendees at the media reception. I remembered her from my visit to TCM studios a while ago and spoke to her about how much I had been looking forward to this festival. Dorian clearly loves what she does and took time to chat with many people individually with a genuine interest about their backgrounds, what brought them to the festival, and which films or discussions they were most eager to see. 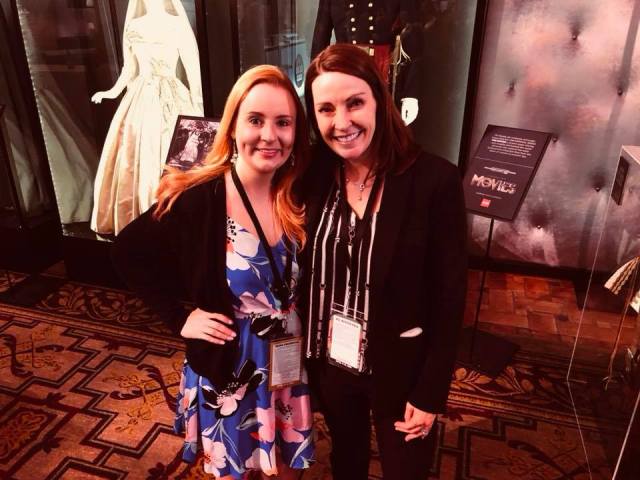 In addition to reuniting with or meeting TCM talents, I was elated to see that I started recognizing some attendee faces in the room with me! One of the first few people I recognized was the wonderful Beth Ann Gallagher, who I met on the TCM studio visit and have kept in touch with through the internet. Gallagher runs the Spellbound by Movies blog and TCM Backlot Sacramento chapter. Additionally, she is a fellow member of the Classic Movie Bloggers Association. (We also happen to be the two redheads from the TCM Backlot commercial, of all things!)

I also met Mary Mallory, who is the co-author of the fabulous Hollywood Celebrates the Holidays: 1920-1970 along with Karie Bible. The book offers fantastic images of various stars in photos that associate with various major holidays. 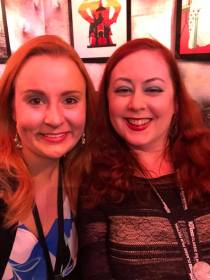 Energized by finally matching the names of long-time Facebook and blogger friends to their faces in person, I was eager to go on to the social media mixer. Along the way, I discovered the social media board and also ran into two TCM Backlot Chicago members–Geri Murray and Margaret McGregor–from our TCM Backlot local chapter on the way over.

Towards the end of the media reception, I mentioned that I was finally meeting several individuals with whom I had previously connected online in-person, thanks to our mutual interests in TCM and classic cinema. The social media mixer was very similar in this regard, albeit offering a considerably amplified amount of these “first time, in-person” meetings. Both the media reception and the social media mixer were propelled by a boundless energy and eagerness for the festival to begin. Instead of being housed at Club TCM, the social media mixer took place across from Club TCM at Teddy’s in a casual and cozy lounge setting.

While the social media mixer certainly matched that energy, it was also a celebration of having this group of TCM Film Festival attendees finally in one place and ready to start off another amazing film festival. Though I was a newcomer to the festival, I immediately felt a sense of belonging to this incredible group of people each making their own impact upon celebrating classic cinema through their various niches and specific interests. From elated grins at reuniting, to fondly toasting the memory of a member of this fine group who was no longer present, it was clear to see that many attendees not only delight in viewing their must-see films but also enjoy spending time with one another, catching up, and building more memories.

At the social media mixer, I met a TON of people in-person for the first time. Among them were Kellee Pratt from Outspoken and Freckled and Classic Movie Hub as well as Danny and Aubrey Reid from Pre-Code.com. I also met Julia Ricci from Heartland Film and the TCM Backlot Indianapolis chapter and Erin McGee of Miss Honey Hale. All the while, my lanyard started to slowly fill up with some pretty awesome pins highlighting various blogs and social media outlets, in addition to favorite film stars.

After two incredible pre-festival gatherings, I was beyond ready to experience my first day of TCM Film Festival!