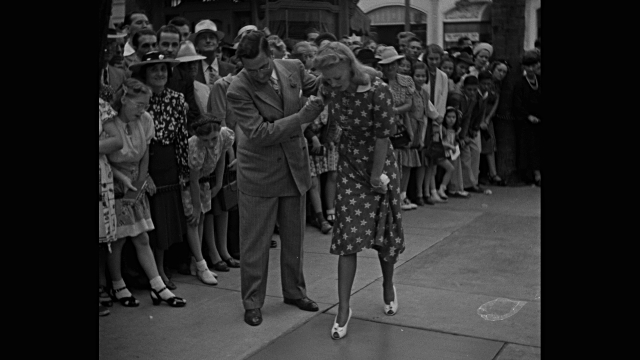 Title card: “Footsteps: Fame in Concrete for Ginger Rogers” / WS actress/dancer Ginger Rogers leans on arm of the manager of Grauman’s Chinese Theatre as she steps her right foot into wet cement to leave her footprint in a collection outside the theater, part of a Hollywood tradition; spectators watch / MS manager assists Rogers as she removes her foot from the wet cement, leaving the imprint of a high-heeled shoe; Rogers looks at the imprint / CU Rogers slowly lowers her left foot, in white high-heeled shoe, into cement / spectators, primarily women, watch from behind rope line / Rogers’s foot wiggles as she presses it down to make the imprint; she lifts her foot away / cutaway shot crowd watches / MS Rogers kneels on a platform stretched over the wet cement and writes an inscription in it with a stick / POV from side rear as she begins to sign her name / CU her face as she concentrates on writing in the cement / POV from side rear as she completes her signature / front shot Rogers leans forward from platform and places her hands in the cement to make handprints