Posted on December 10, 2017 by Annette Bochenek 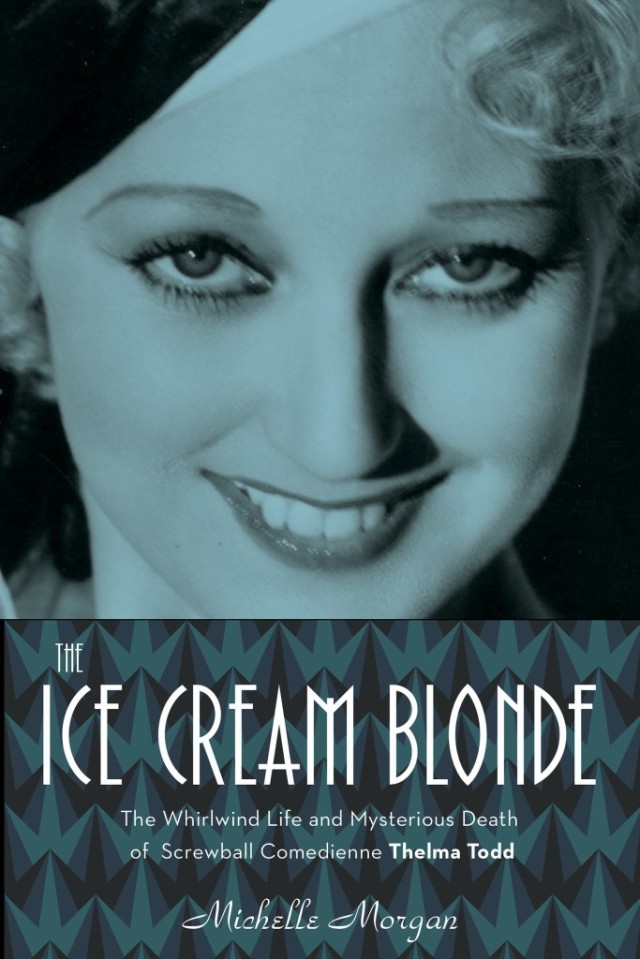 It shouldn’t come as a surprise to anyone when I note that I am a fan of classic Hollywood. I am wildly enthusiastic about hearing the stories and lore behind any actors and actresses whose roots are embedded within the history of classic cinema. I love reading the “good, bad, and ugly” about any star, whether saintly or scandalous.

If any town has a short-term memory, sadly, it’s Hollywood. Edifices and places of great historical value to the movie-making culture are razed to make way for modern structures far too often. But what about a story? Surely, that is worth preserving. Surely, that can be saved. To quote Margaret Atwood, “In the end we’ll all become stories.” But how these stories are maintained is crucial.

The story of Thelma Todd is almost film-worthy in and of itself. In The Ice Cream Blonde: The Whirlwind Life and Mysterious Death of Screwball Comedienne Thelma Todd, author Michelle Morgan takes us through a kinetic journey of Todd’s life and death. This inviting tale is as refreshing as ice cream itself, and possesses one key ingredient sprinkled on top—legitimacy.

Morgan’s depiction of the life and death of Thelma Todd is researched in great detail, offering the reader concrete facts about Thelma’s career both on and off-screen. Through Morgan’s careful research and presentation of information from Thelma herself or those who knew her, Morgan paints a fascinating picture of Thelma’s childhood, professionalism, relationships, friendships, and untimely demise. 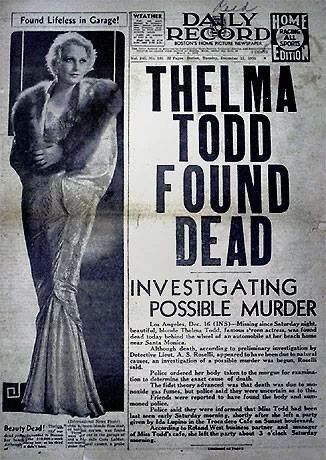 Since Todd’s death in 1935, her mysterious departure has become an intense claim to fame for the actress—arguably, even more so than the acting career or vibrant filmography she left behind. To this day, her passing is shrouded in mystery.

Morgan aptly begins her biography in the third person, transporting the reader to 1935 with the turn of a page, and guides her audience through the shocking discovery of Todd’s body within a hushed garage. Upon this scenario, the reader is left with many questions—likely the same questions careening through the minds of those who knew her and coped with her passing on that fateful day.

Looking for answers or some sort of explanation propels the reader into continuing the rest of the story. The reader, just like anyone who knew Todd, thirsts for context and wants to somehow come to terms with Todd’s passing. 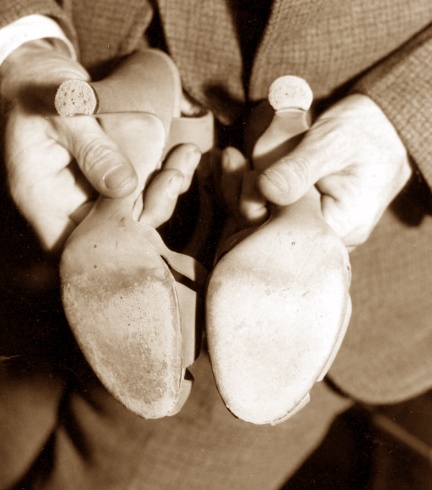 Like an antidote, Morgan closes the door on this grisly scenario and transitions into a retrospective exploration of Todd’s life. We learn about Todd in chronological order, covering Todd’s time in her hometown of Lawrence, Massachusetts, close-knit family life, dreams of becoming an educator, reluctant rise to becoming a Hollywood beauty, and evolution into a savvy restauranteur and forthright film starlet.

I was particularly fascinated not only by Todd’s early years in Lawrence, but also by the different personalities she was paired alongside. There was a type of friendly competition in the air during her pre-Hollywood years, and she had a unique rapport with her co-stars when working on film sets. She worked with so many greats, including Laurel and Hardy, Buster Keaton, the Marx Brothers, and so many more.

Additionally, I enjoyed reading about her friendships with Zasu Pitts and Patsy Kelly. Her pairings with these talented women were fantastic, and on par with the style of comedy presented by Laurel and Hardy. 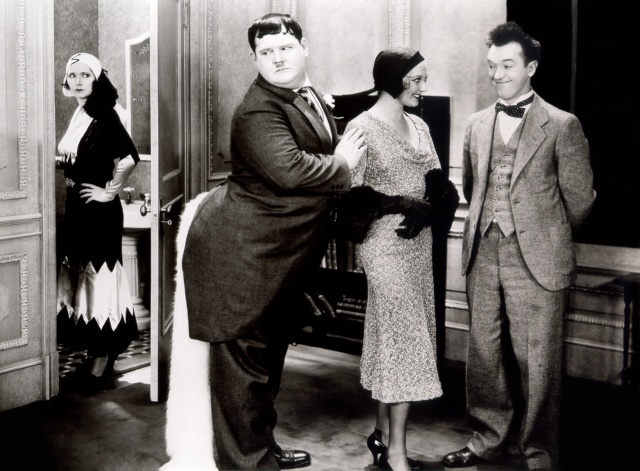 Morgan is careful to distinguish fact from fiction, as one must be when tackling a subject linked so closely to controversy. If some piece of information is a mere rumor or cannot be supported, Morgan is frank about its credibility. In the case of Thelma’s passing, we are presented with the facts, whether they be threatening notes, or theories surrounding her passing.

Courtesy of the Chicago Review Press, I was lucky enough to interview Michelle Morgan about this biography, and am delighted to share our exchange here.

Annette: What initially inspired you to pursue researching the story of Thelma Todd?

Michelle: Thelma came to me in quite a unique way. I was writing a book about Marilyn Monroe, and I came across a letter which mentioned Pat De Cicco. I didn’t know who he was, so I researched and discovered that he’d been married to Thelma Todd. I had heard her name before, but didn’t know anything at all about her. When I discovered she had died aged just 29, I was really shocked. After that I couldn’t stop thinking about her and felt as though she was knocking on my brain, demanding I tell her story! I started doing some research, and five years later, here we are. 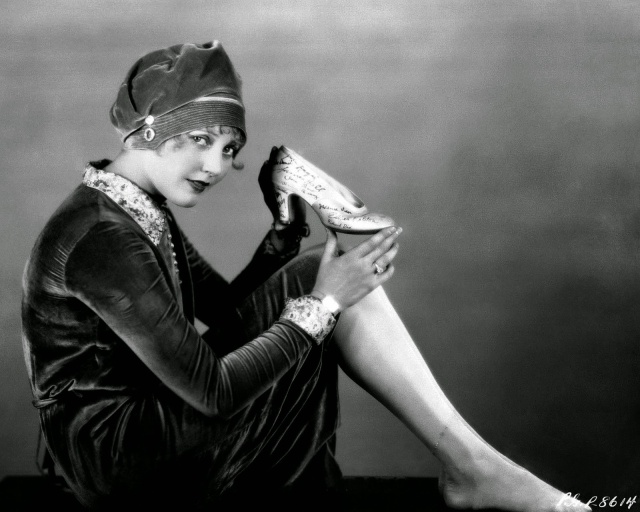 Annette: Why do you think it’s important for today’s audiences to be aware of Todd’s story? In particular, I am fascinated by the hometowns of silent and Golden Age cinema stars. How has her legacy been preserved in her hometown of Lawrence, MA, if at all?

Michelle: I think it is tremendously important for us to keep Thelma’s memory alive and have today’s audiences aware of her work. She was extremely talented; very funny with magnificent comic timing. She worked very, very hard and even though she was given very small parts in many instances, she always made the most of them. Anyone who has watched her Hal Roach shorts would – I’m sure – agree that her talent was just as great as that of Laurel and Hardy. She absolutely deserves to be remembered and celebrated in the same way they are. She should be seen as a huge inspiration to anyone who aspires to act, particularly in comedy. As for Lawrence, she is certainly remembered there and has fans that live there. I believe they have even held Thelma Todd days in the past, which are a great idea and a terrific tribute.

Annette: I’ve often heard Thelma Todd nicknamed the “Ice Cream Blonde” and “Hot Toddy.” After reading your book, I can’t help but link ”ice cream blonde” to the sad story of her brother’s passing at the creamery. Do you know of how she reacted to these nicknames? How did they come about?

Michelle: I’ve never thought of that before, but yes, that is a sad coincidence. Also, another reviewer pointed out that she once had an accident with an ice cream truck, so there’s another strange thing! The Ice Cream Blonde nickname seems to be something that came about because of her very blonde hair and pale skin. Hot Toddy is an interesting one because she was known to call herself Toddy at school and in her early days, but her housekeeper said during the inquest that she once witnessed Thelma telling someone never to call her that name again. It seems to have been a name devised by the actress herself, but by the end of her life, it would appear that she had tired of it.

Annette: What did Thelma want her audience to be aware of about her? How did she aim to present herself to them?

Michelle: I think Thelma wanted to be known as a terrific actress; sometimes in drama, sometimes in comedy. She was generous to a fault; loving and giving towards fans, and always grateful for her fame. She never changed and always remained humble; she hated people with huge egos and those who she considered stuck-up. She was very happy to present herself as a “normal” person no matter how famous she became. She was always open and honest; questioning the morals of Hollywood and making plans to move on when she was ready to. She was a very modern woman; light-years ahead of her time.

Annette: How can we best preserve the legacy and story of Thelma Todd?

Michelle: The very best way we can preserve her legacy is by spreading the word about her films and her work. Tell your friends, watch her films (many are available on YouTube and on DVD); and write to channels such as TCM to request they show her work. If we can get more people to watch her films, then over time we will be able to ensure that her life becomes much more well-known and she will no longer be just “the body in the garage.” She deserves so much more and I hope more than anything, that my book will go some way to bring her name and her films back into the public eye. I want this so much!

Annette: What was the most shocking or exciting part of your research process for this book?

Michelle: The most shocking thing for me was just how little has been written about Thelma as an actress and a person. I referred to a lot of books in my research, and if she was ever mentioned, generally it was just a paragraph about her mysterious death. I bought a book about one of her co-stars and it didn’t even mention her or the film she acted in with him! That’s how little is written about her! I consulted books on contemporaries, co-stars, and Hollywood in general, and it really shocked me that people just did not speak about Thelma at all. Her name was literally swept under the carpet after she died, and the only time she was remembered, was as an anecdote about being a “body in the garage.” This makes me incredibly sad, and it needs to change. I wrote my book for Thelma; in the hope that it would change her legacy and make people realize that she was a real-life person, just like you and me. I sincerely hope that the book makes people seek out her films and start talking about her talents. I think she absolutely deserves it.

Morgan’s book is not to be missed, and is a wonderful gift for any film enthusiast who likes a good mystery. Gripping from beginning to end, Morgan’s discussion of the life and death of Thelma Todd is exquisite.

The biography is available for purchase in various bookstores, as well as online. 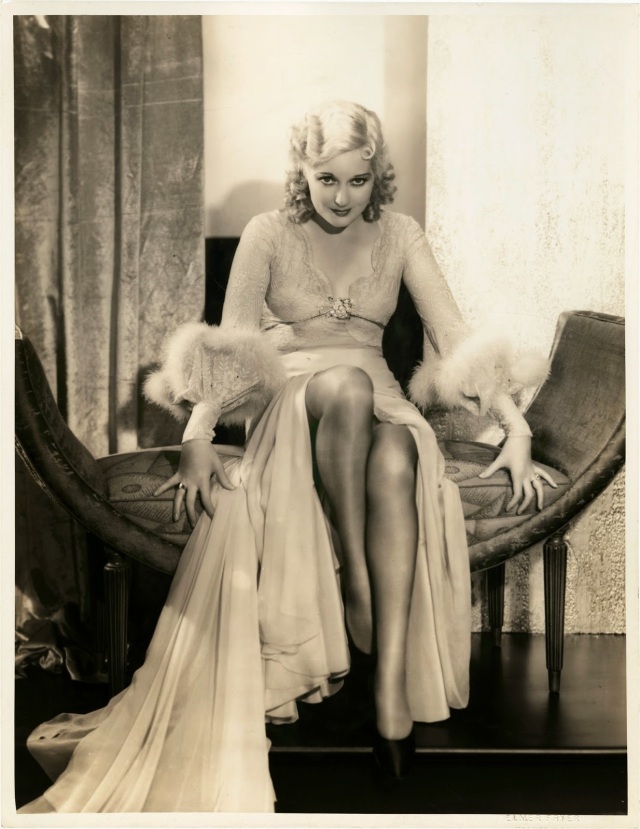