A Powerful Legacy: My Afternoon with Taryn

Posted on November 30, 2015 by Annette Bochenek 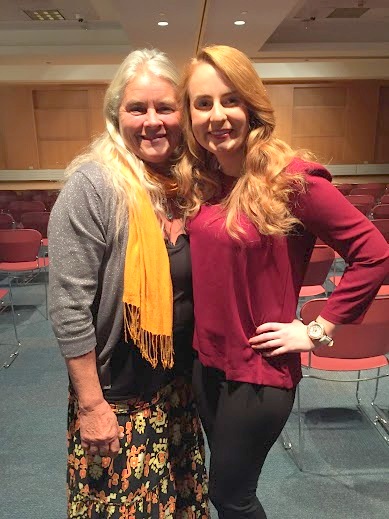 Taryn Power and I

“Hometowns to Hollywood” has been a labor of love for me since May 2013. Through this blog, I have been able to learn about some of my favorite Golden Age cinema stars in the most active way possible—this, of course, being walking in their footsteps, tracing their roots in their respective hometowns, and exploring how their legacies live on within their hometowns. In addition to sharing my adventures with the readers of my blog, I have started to communicate my stories as presentations prior to screening Golden Age films that highlight the work of the given star I choose to profile.

While one way of learning about someone is to visit locations related to his or her life, another equally exciting way is to speak with others who knew the person firsthand. It is always amazing for me to chat with people who knew these key contributors to Golden Age cinema so intimately. At the same time, it is also fascinating to speak with others who have been impacted deeply by a certain star, but never really knew him or her directly.

Taryn Power-Greendeer is a perfect hybrid of both of these examples. The daughter of Tyrone Power and Linda Christian, she maintains a close connection to her family’s history and ties to the film industry. At the same time, she was only five years old when her father died. Although it is plain to see that she and her sister, Romina, did continue to have a relationship with their father after their parents divorced, Tyrone’s time and his children’s memories of him were sadly cut short. 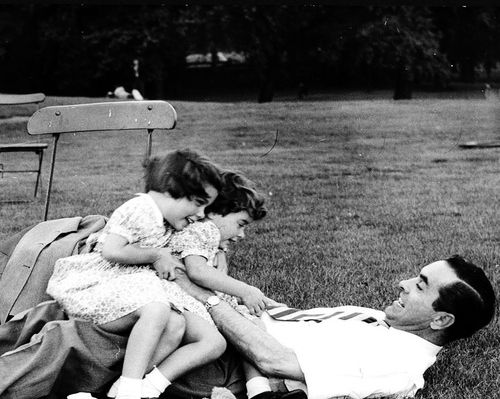 But “Hometowns to Hollywood” is about acknowledging legacies left behind in various forms, and children are a powerful legacy to honor. It is through them that stories are so often granted the chance to continue. Their lives build upon the richness of the past, and simultaneously hone a new and uncharted future.

I had the pleasure of interviewing Taryn in early November, as part of my “Hometowns to Hollywood” film series. I presented about Tyrone’s hometown of Cincinnati, Ohio, and conducted the interview in front of the audience afterwards. A screening of the Tyrone Power and Loretta Young film, Love is News, followed.

Taryn’s memories of her father are few, and seem to begin when his life had already ended.

“One of my earliest memories actually takes place at his gravesite,” shared Taryn. “He and my mother had already divorced, and his current wife did not want us at the service. When we came to the gravesite after the funeral, I remember seeing an older woman sobbing dramatically. My sister and I were both very young at the time, and had a hard time with this situation. We sort of looked at each other and giggled nervously, as we took in the uncomfortable scene.” 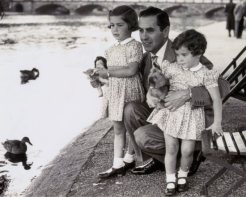 Since Tyrone had passed away before his children really got to know him, his death left much to be discovered and researched carefully. Taryn’s sister, Romina, took on the challenge of writing about her father as she learned about him. Throughout the course of many years, Romina and Taryn spent much time gathering information about their father and traveling to interview people who knew him. The result of this immense project was the book, Searching for my Father, Tyrone Power, by Romina Power. Taryn was sure to share excerpts from this book with the audience—especially the moments that described Tyrone’s more financially difficult times and early years in Chicago.

“I’m still learning so much about my father, thanks to Romina’s book. In fact, it took me a while to even hear his voice. My sister and I went to boarding schools in Italy, and when I would watch a Tyrone Power film, an Italian actor would dub him. It wasn’t until I got a hold of a record that featured him speaking on it when I finally heard his voice.” Romina’s book actually opens with this scenario.

Since this presentation preceded a screening of Love is News, a screwball comedy from early on in his career, I chatted with Taryn about her father’s versatility as an actor.

“You know, in so many of his movies, we’re used to seeing him as a swashbuckler, or taking on these dramatic roles. But one thing that surprises me every time is his sense of comedic timing in these other films. When I see him laughing and smiling, I laugh and smile, too.”

I mentioned that Loretta Young starred alongside Tyrone in this particular film. Loretta Young’s family members (her son, Chris, and his wife, Linda) reached out to me to pass a message along to Taryn. Here’s an excerpt from that communication:

Loretta Young’s family is pleased that you’ll be screening “Love is News” today with Ms. Taryn Power and Annette Bochenek!  It’s a fun, romantic comedy with a stellar cast of stars.

Loretta enjoyed working with Tyrone Power. The two were well matched and both were beautiful. The audiences loved they way they looked together on screen!

Loretta always broke into a smile when sharing her experiences of working with Tyrone. She liked to watch him work. He was professional, kind to cast and crew, gracious, and they laughed and had fun making films.

They were invited to put their hand and foot prints in cement at Sid Grauman’s Chinese Theatre together. That was a very special memory!

There’s a great cast in the film and Loretta would go on to work with several of these cast members again. Loretta and Ty made five films together. Among others, she worked with Don Ameche on three films, and with Jane Darwell on six films. The Director, Tay Garnett, worked with Loretta on three films and even directed episodes of “The Loretta Young Show,” as well.

Throughout the presentation, I shared my impressions of Tyrone’s hometown and many rare photos with Taryn that I had come across as I researched about her father. In fact, one set of images was a series of beach photos featuring Tyrone and Linda, with baby Romina, from the Michael Butler collection at Oak Brook Historical Society. Taryn informed me that she was somewhat present for this photo shoot, quipping that she was in “a womb with a view.” It came as a fun shock to me that this series of beach photos was later used as part of an ad campaign for weight loss. Fancy that!

The interview drew to a close as Taryn received two surprise photos of her parents to take home with her. One featured the profiles of her mother and father.

“I’ve had floods and fires. These [pictures] mean so much to me. As a matter of fact, my mother told me that the best day in her life was the day she married my father,” Taryn mused, carefully sliding just one more photo out of the crisp, manila envelope—a portrait of her parents on their wedding day.

2 Responses to A Powerful Legacy: My Afternoon with Taryn