“If a man can bridge the gap between life and death, if he can live on after he’s dead, then maybe he was a great man.” -James Dean

Rugged, aloof, and self-aware, James Dean was the epitome of cool. He personified teenage years with charisma, rebellion, and raw emotion, while holding a deep reverence for his craft as an actor. Dean believed in the method, ideally living out the experiences of the characters he portrayed, in order to produce natural responses to the scenes at hand. Despite the angst-filled characters he portrayed in his films, Dean maintained a down-to-earth personality as an introvert in possession of quirky charms.

To me, James Dean is something of a romantic figure. He hailed from a rural town in Indiana, attended Quaker services, memorized the poems of Hoosier poet James Whitcomb Riley, lost his mother at an early age, followed his dreams of acting onstage, appeared in three major films, and had his life cut short right at the pinnacle of his career.  But loss has created legend, and Fairmount, Indiana, is extremely proud of its native son.

Fairmount itself is a small rural town, accessible by long, winding country roads. The town has a very small downtown area, which apparently hasn’t changed much since Dean walked its very streets.

While driving into town, we first encountered a sleepy, unfenced Park Cemetery, in which Dean, his father, and stepmother are buried. Despite the fact that this cemetery seems to be situated in the middle of nowhere, Dean still has a steady flow of visitors from all over the world. When I found Dean’s grave, a minute later, a van of fans from England pulled alongside me. One of the passengers, wearing a leather jacket, said this trip was “a dream come true” for him and that he had idolized Dean since his teenage years.

I trust that Dean receives visitors at all hours of the night, showing he is still missed and revered today. To quote from Findagrave: In a bit of trivia…his headstone is a soap opera with a life of its own. It is constantly being chipped away by souvenir hunters and many times it has been stolen intact, found and returned. 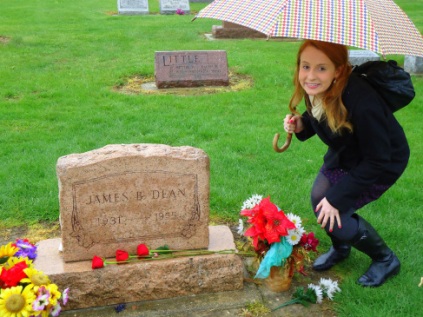 The next I visited was just on the edge of downtown Fairmount. Here, the town has a beautiful bust of James Dean, made by late sculptor Kenneth Kendall. Kendall created the bust of Dean for Griffith Park Observatory, but Fairmount holds a replica of the bust.

Here are some shots of the bust in Fairmount: 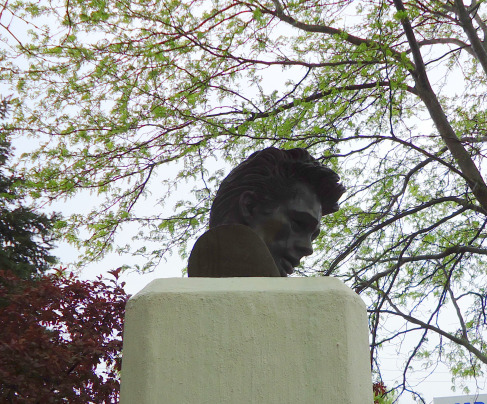 In comparison, these are shots from the bust in Griffith Park:

My next stop was the James Dean Gallery. Incidentally, they also maintain a Facebook page. The Gallery is free of charge, although they do accept donations. They boast an array of memorabilia and movie props, and also have a small gift shop. Additionally, they gave us a free map of James Dean points of interest around the area, including his church, the farmhouse in which he grew up, his high school, grave site, and even directions to an all-denim portrait of Dean. Don’t forget to pose with the life-size James Dean statue! 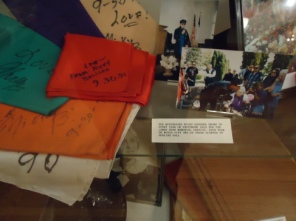 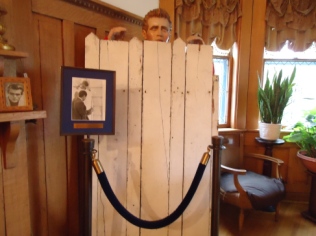 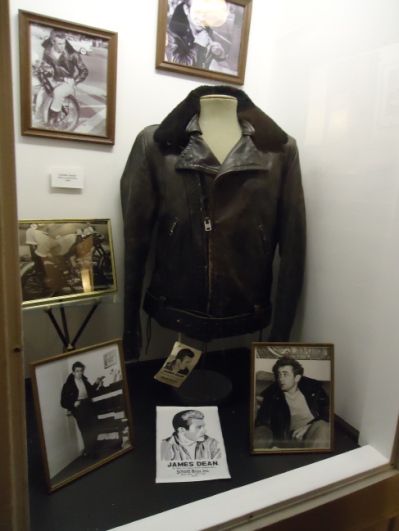 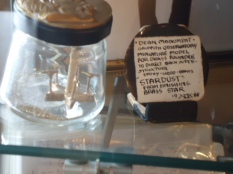 My next visit was to the Fairmount Historical Museum, which is also free of charge. They staff members love to talk about James but also celebrate cartoonist Jim Davis, creator of the Garfield comics, who is also from Fairmount. The historical society contains many of his personal effects, literally scooped off of his desk by family members just after his death. They also house his motorcycles, and the story of one, in particular, was incredible. The historical society tracked Dean’s motorcycle to an owner in 1980s, who had no idea the motorcycle was owned by Dean at one point! This location has James Dean’s doodles on his homework, some of his written assignments, his junior high basketball uniform, personal pictures, his comb, conga drums, etc.

Here are some photos form James’ visit to his old high school, which include him signing autographs and sitting in his old classroom. 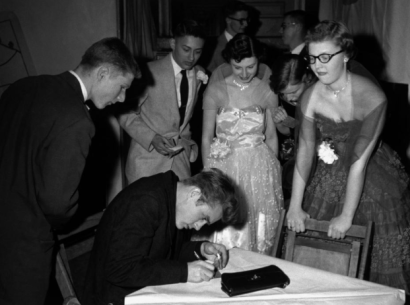 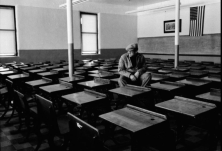 One of my favorite artifacts includes a picture of James Dean on a visit home, playing his conga drums in the middle of a pig pen. He was a farm boy at heart, and that picture made him more endearing and human to me. 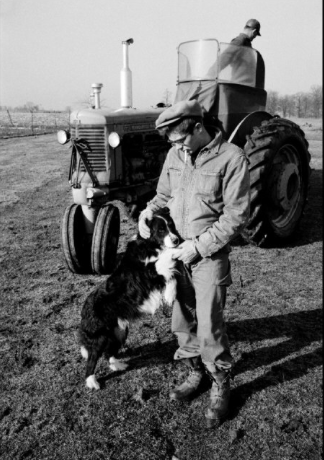 Legendary James Dean to fans worldwide, he was and is still “Jim” to everyone in Fairmount. Likewise, Dean’s friends and cousins often frequent the historical society, and I’m not surprised–it’s a wonderful place!

The farm in which Dean was raised still stands to this day, and continues to be owned by his mother’s side of the family. The property is known as Winslow Farm, and it is here that he would often visit to play with his young cousin, Markie. 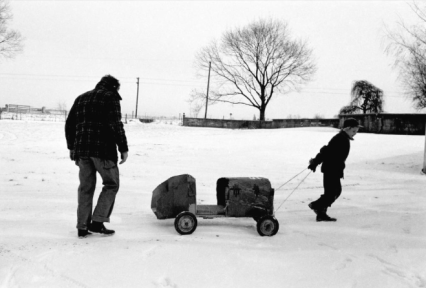 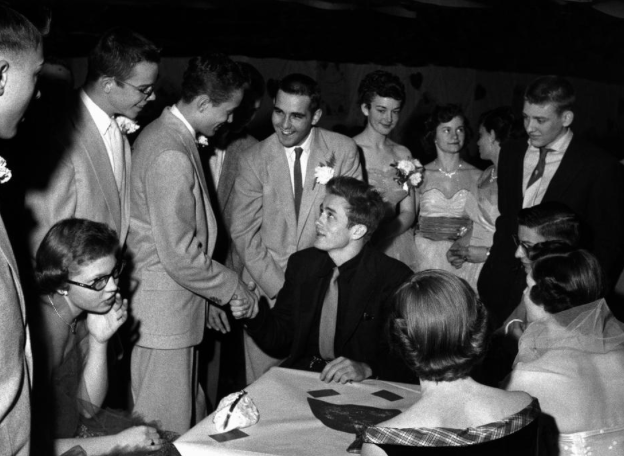 Here is a shot of the property today:

Nearby, Marion, Indiana, also has memorial markers for James’ birthplace.

On the way out of town, visitors can spot the Quaker church that Dean attended as a boy. 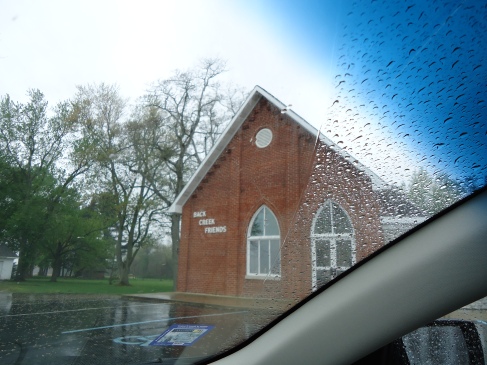 It is also worth noting that Dean was a bit of a motorhead. People in Fairmount often paired him with the revving of his motorcycle, which he would maneuver both on the road and through the cornfields. But it is the fateful Porsche Spyder that will be linked to the tragedy of Dean’s death. 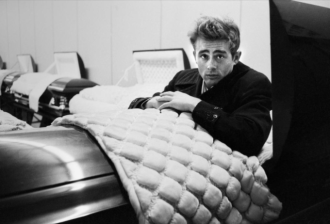 His funeral was held at the Fairmount Friends Church. To quote Findadeath, Dean’s funeral was attended by 3000 guests (more than the population of Fairmount), and his pallbearers consisted of friends from high school.

I highly recommend that you visit Fairmount, especially if you’re a fan of Dean and classic cinema. They also have a classic car/Dean festival in the fall, which continues to draw a crowd larger than the population of the town.

Drop by Fairmount, and stroll the streets familiar to James Dean. It’s not to be missed.

Update: Years after my trip to Fairmount, the Indiana State Museum honored Dean with an exhibit. Here are some shots from that display. My favorite item is the East of Eden suit; however, you’ll also find the script from Giant, the car in which Dean drove his prom date, his middle school basketball uniform, and more. 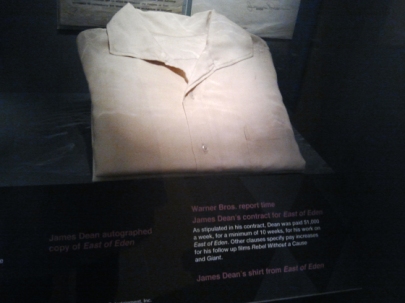 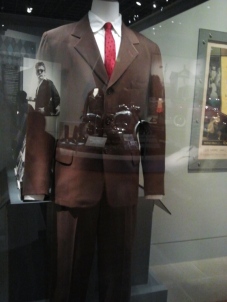 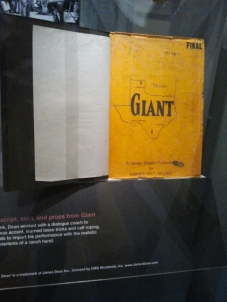 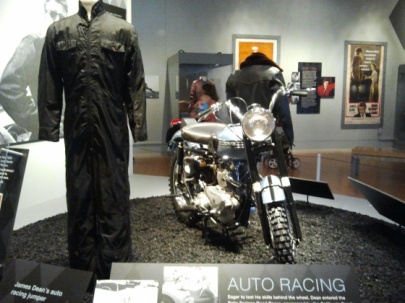 Dr. Annette Bochenek of Chicago, Illinois, is an avid scholar of Hollywood’s Golden Age. She manages the Hometowns to Hollywood blog, in which she writes about her trips exploring the legacies and hometowns of Golden Age stars. Annette also hosts the “Hometowns to Hollywood” film series throughout the Chicago area. She has been featured on Turner Classic Movies and is the president of TCM Backlot’s Chicago chapter. In addition to writing for TCM Backlot, she also writes for Classic Movie Hub, Silent Film Quarterly, Nostalgia Digest, and Chicago Art Deco Society Magazine.
View all posts by Annette Bochenek →
This entry was posted in Uncategorized and tagged cause, dean, east, eden, fairmount, giant, hollywood, indiana, james, rebel. Bookmark the permalink.