The name Robert Wise easily conjures up numerous images to film fans. From Maria whirling about her beloved hills to the palpable tension of the Jets and the Sharks, Wise certainly made his mark upon American cinema.

Though Wise worked on an array of classic films, his keen skills as a director, producer, and editor are expressed in each unique film. He worked across a wide variety of genres, seamlessly adapting his talents to all of his projects. While fan will have his or her favorite film to which Wise contributed, one factor to which all film fans will agree is that Wise was a master of his craft.

J.R. Jordan’s Robert Wise: The Motion Pictures (Revised Edition) is a worthy tribute to Wise. The book has been released in its second edition, featuring over twenty interviews to help provide a thorough and fascinating understanding of Wise’s life, skills, and films.

Jordan’s book is arranged in fiveparts, highlighting Wise’s work in films for RKO Radio Pictures, in addition to his work in the 1950s, a wide range of high-profile films, science-related and surrealist films, as well as his later projects. The book begins with a foreword by Gavin MacLeod, followed by an introduction from Wise’s nephew, Douglas E. Wise, and delves into Wise’s early life and work. 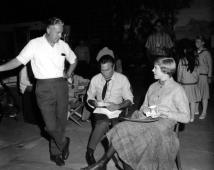 West Side View…1961: Profile headshot of American movie director Robert Wise looking through a viewfinder on the set of his and Jerome Robbins’s film ‘West Side Story’. Words and music by Stephen Sondheim and Leonard Bernstein. (Photo by Hulton Archive/Getty Images)

Since I have an interest in the early years of individuals in the film industry, I was happy to see a description of Wise’s early life and Indiana roots. I have passed through the small Indiana towns in which he lived–Winchester and Connersville–and know that he is memorialized in Connersville. While growing up in Indiana, Wise was already captivated by the art of motion pictures. According to Jordan, “A young Wise often visited the three movie theaters in the area and essentially became fascinated with motion pictures” (1). The discussion of his transition to the film industry is succinct and effective, profiling some of the connections he made early in his career.

The first film discussed is The Curse of the Cat People (1944), which is the sequel to one of my favorite films Cat People (1942). While quite different from the original, the film is well done and offers a very different focus on the heroine of the first film. Though not as widely praised as some of Wise’s other films, it does exhibit a special quality that comes with Wise’s influence.

Jordan certainly discusses Wise’s well-known works, such as West Side Story (1961) and The Sound of Music (1965), it is the inclusion of lesser-known works that I found especially informative. Without a doubt, much has been written about Wise’s acclaimed works, but the films leading up to them serve to offer a detailed look at how Wise honed his craft over time and grew to be a laudeded professional in his field.

Wise’s work ethic also shines throughout the book. He was a constant presence on set, even during post-production work, and continued to try and improve his final product well after production. According to Jordan:

Wise essentially made it a habit to remain on the set of his films as post-production transpired, especially when it came to the editing and rerecording of particular sequences. He was also a firm believer in sneak previews, often commenting that one never knows how a picture will be received if it is not tested with an audience ahead of time. (83)

Jordan’s examination of Wise’s work and influence behind the camera is well-researched and offers a fine overview of the multitalented Wise. Robert Wise: The Motion Pictures (Revised Edition) is well worth enjoying for any film fan or admirer of Wise’s work, in addition to individuals interested in the art of direction.